Traffic pollution is causing a few hundred premature deaths in Toronto every year, and experts say there are feasible solutions to reduce its harm.

Traffic pollution is responsible for approximately 280 of 1,300 premature deaths in Toronto every year, according to a 2009 analysis by Toronto Public Health.

Traffic pollution can impact your health if you live within 250 metres of a major roadway – that's one in four Canadians. The closer you are, the more you're exposed to the chemicals. The same applies for multistorey buildings: if you live on the ground floor, you might want to close your windows.

"It's a small minority of vehicles causing high emissions," says Dr. Greg Evans. Those vehicles, which will be out on the busy roads Labour Day weekend, are often poorly tuned or too old and they're slipping by Ontario's Drive Clean program, he says.

Dr. Evans is the director of the Southern Ontario Centre for Atmospheric Aerosol Research at University of Toronto. His team, which works in partnership with Ontario's environment ministry, is researching the link between traffic pollution and its impact on human health.

While there's an assumption that air pollution is worse on hot summer days, that's not necessarily the case, Dr. Evans says. Ozone emissions do spike, but other pollutants including ultrafine particles (UFP) are higher in cold weather. 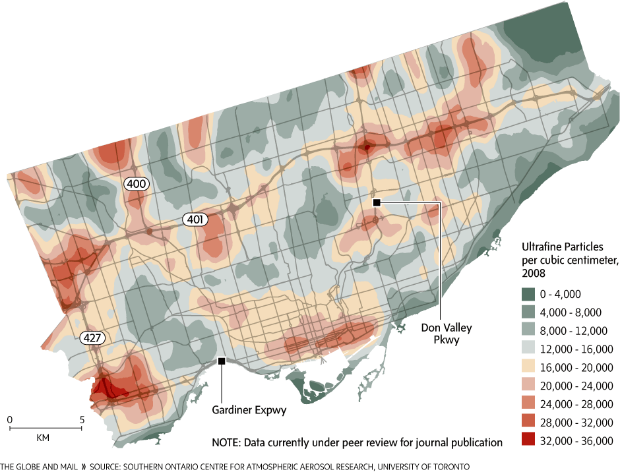 Concentrations of UFPs are higher in areas of higher traffic density – often along highways.

UFPs are a relatively new measure that may prove to be more toxic than other pollutants – and a key focus of Dr. Evans' research. UFPs are about 100 times smaller than the size of a blood cell, and can go straight into your lungs.

Dr. Evans wants to see heavy Drive Clean emitters taken off the road, ensure new vehicles are designed to reduce the appropriate pollutants, and to raise awareness about the varying impacts of traffic-related pollutants on human health.

For her part, Dr. Campbell would like to see more attention paid to truck traffic. This could include keeping the big vehicles off the road during rush hour, when there's increased pedestrian and cyclist traffic.

Both Dr. Campbell and Dr. Evans pointed out that while it's still very much a concern, air quality has improved in recent years. This could be thanks to a range of factors, which for Ontario includes the shuttering of coal-burning power plants and the downturn of the auto industry.

"It's a good news-bad news story," Dr. Evans says. While air quality is improving, "we still dump pollutants into our atmosphere and then breathe them in with our next breath."