A judge has ruled that the trial for a man facing explosives charges linked to last year's G20 summit can go ahead.

The judge found warrants to search Byron Sonne's Toronto home were based on credible information.

She also said several statements Mr. Sonne made to police were voluntary and admissible.

With those rulings, Mr. Sonne's trial began today with an agreed statement of facts that included his purchase of various chemicals.

He is charged with possession of explosives and counselling to commit mischief not committed.

Police allege he assembled homemade explosives and incited others to tear down the G20 security fence and surveillance cameras through his Twitter and Flickr accounts.

Mr. Sonne maintains he was merely trying to expose flaws in G20 security. As for the alleged bomb making materials – Mr. Sonne says the chemicals he had were all legal, were not combined in a dangerous way, and were actually used for making model rockets and crystals.

Mr. Sonne spent 330 days in jail before finally being released from custody in May.

Before his arrest he lived in a million-dollar home in Toronto's tony Forest Hills neighbourhood and was married to Kristen Peterson, an independently wealthy artist.

Now he's in the middle of divorce proceedings and living with his parents.

Three convicted in Toronto G20 mayhem defiant as they are sent to jail
May 8, 2018 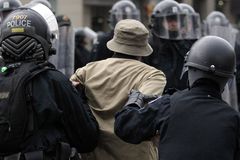