A proposed $50-million pedestrian tunnel linking Toronto's waterfront to the island airport will save air passengers about four minutes waiting time before their flights, compared with using the ferry.

That's among the conclusions of a city-commissioned report into Billy Bishop airport, where growing business-commuter traffic is raising the hackles of some community activists.

The newly released report, by international aviation consultants Airbiz.aero, used computer modelling to determine that a passenger using the proposed underwater tunnel would wait just over five minutes for check-in and security screening, on average.

Passengers on the free ferry, which runs every 15 minutes, wait just over nine minutes at check-in and security.

"The ferry has the impact of accumulating passengers which then result in excessive wait times ... by creating artificial 15 minute peaks based on the arrival-departure of the ferry," says a draft copy of the report, dated Feb. 3.

"A pedestrian tunnel would somewhat reduce congestion at the terminal by introducing a steady flow of passengers."

The draft was obtained by The Canadian Press under Ontario's freedom-of-information legislation.

To pay for the proposed tunnel, the airport last summer added $5 to the $15 fee it previously charged for each passenger on an outgoing flight. About 1.2 million people flew from Billy Bishop in 2010, almost all with Porter Airlines Inc. Air Canada is set to begin some competing flights to Montreal on May 1.

A spokesman for the federally operated Toronto Port Authority, which is responsible for the facility, defended the additional $5 charge to save four minutes.

"In the world of aviation every second counts, not least to our business travellers, who often fly specifically from our Billy Bishop [airport]so they can leave their meeting and get to their flights in a matter of minutes," said president and CEO Geoffrey Wilson.

"The ferry, while consistent, is currently the only method of accessing the airport and if there are inclement weather conditions it could [be] and on occasion has been, delayed."

The port authority plans to continue regular ferry service even after construction of the tunnel.

The head of a local group opposed to the island airport said the new report raises basic questions about the need for a tunnel.

"Spending what appears to be upwards of $50-million for a bit of smoothing of passenger flow to the island airport is an incredible waste of public assets," said Brian Iler, chairman of CommunityAir.

"Will passengers really use a facility that requires them to take an elevator down six storeys, travel across through the tunnel, and take another elevator back up, when the ferry is right there - or will be in a few minutes?"

The Airbiz.aero report also endorsed the findings of a previous review, by Jacobs Consultancy Canada, that said a daily cap of 202 "slots" - that is, the right to land or take off 202 times in one day - was reasonable, based on noise-level restrictions and other factors.

Jets are not permitted at the airport to help dampen noise in an area that's home to thousands of downtown residents.

Airbiz.aero said the pedestrian tunnel will not lead to expanded service at Billy Bishop, as community activists had claimed, because a restriction on the length of the main runway already sets a limit on the amount of air traffic.

The federal Transport Department last month introduced a draft regulation to expressly permit construction of a pedestrian tunnel and to eliminate any doubt about the current regulations, which prohibit a "fixed link." The deadline for feedback was March 4.

The current regulations date from May, 2005, when the previous Liberal government acceded to local political opposition to a proposed bridge to the island airport, and prohibited construction of "a bridge or similar fixed link."

The Toronto Port Authority, which has said the tunnel could cost between $50-million and $60-million, has not yet hired a contractor as it awaits the new regulation from Transport Canada.

The Airbiz.aero report says the tunnel will require additional infrastructure at the waterfront to better accommodate the flow of pedestrians and other traffic. 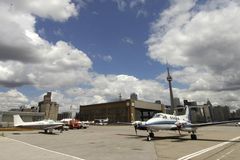