This week, Toronto learned it was getting a new public space built around the concrete bones of the Gardiner Expressway.

But Project: Under Gardiner will also rely on another kind of structure – a partnership between the city and private philanthropists. This could change the relationship that Torontonians have with their parks. And it's time.

"When community gets involved, parks get better," says Dave Harvey, head of the non-profit group Park People. Mr. Harvey was at the Under Gardiner's launch this week; building more active community involvement in parks is his organization's mission. And the Gardiner, which is shaping up as an unusual combination of park, trail and cultural incubator, will need such involvement. Its designers suggest that it will be filled by a steady stream of cultural events, organized by a staff curator.

Who will run it? The details weren't clear this week, but it will be some kind of new non-profit group. Such groups in the United States are often known as "parks conservancies." In Toronto there are already 110 local groups, generally known as "friends of the parks."

Downtown Councillor Joe Cressy was enthusiastic in his support for the Gardiner initiative. "In a city that's growing like ours, we need to be investing in public spaces," he said. "In this case, the city needs to step up, but I think there are partners who can also contribute."

He's right. Toronto is changing incredibly quickly, and in some respects, government can't keep up.

Especially downtown, where the population has grown 40 per cent in a decade to 240,000, parks are being used more heavily than they've been in a generation. They are no longer just for small children and dogs – although there are far more of both, pitting "dog parents" against actual parents in a battle for territory. Parks are also places where locals want to cook pizza with their neighbours, as in my local Christie Pits; or play ironic croquet and drink, in the beard-heavy agora that is Trinity Bellwoods.

City staff are poorly positioned to deal with these changes. Parks maintenance staff are focused on watering plants and fixing walkways. And parks spending has been tightly restrained over the past decade, hardly matching inflation and the city's population growth. In 2015, parks and recreation spending was about $368-million, an afterthought in an $11.4-billion budget.

What's worse is that parks staff aren't connected to local neighbourhoods. In the old City of Toronto, parks had dedicated local staff who could figure out how to bend policy to make things happen. Today, friends of parks groups in Toronto hit metaphorical walls when it comes to shaping the physical and social character of their local parks. "It is a system," says a friend of mine with experience in this area, "that grinds down the spirit of even the most persistent volunteer parks animators."

So what is the alternative? The "parks conservancy" model, where a private group has an active role in running the park. This conversation is being inspired by a city rich in both capital and green space: New York. Judy Matthews has had meetings with leaders of the Central Park Conservancy, the private non-profit that runs the bulk of the operations for the park. When we spoke last week, Ms. Matthews said her interest is in ensuring that great new public spaces are built – and then maintained. "The danger," she said, "is that you [build] a fabulous thing and then it falls apart very quickly. That's not what we want to happen here." Indeed.

This sort of arrangement does warrant some skepticism. This Toronto debate is emerging just as New York, under Democratic Mayor Bill de Blasio, is looking hard at the question of "park equity." The worry is this: As private donors endow new parks – often in their own backyards – do these projects pull city resources away from other less privileged areas? New York's most spectacular new park in recent years is the High Line, which opened in 2009. That visionary park, built on a disused rail line, has been a lure for locals and tourists; it has also reshaped the city's economic landscape, minting billions of dollars of real-estate value for neighbouring landowners. Among the winners are Barry Diller and Diane Von Furstenberg, the power couple who put $35-million (U.S.) toward the park. They've probably recouped that money on the value of property their companies own nearby.

This spring New York announced a new donation from the couple to support another high-concept park, Pier 55, by the British designer Thomas Heatherwick. The critic Alexandra Lange panned it as "a gadget … an expensive, limited-use bauble, one that costs the same amount to build as the city is currently investing in 35 community parks." Troublesome. And yet: Toronto, starved for new park space, is increasingly depending on so-called privately owned public spaces – owned by developers – to give its residents breathing room. That, too, is a problem.

Against that backdrop, the Matthews' huge donation for the Under Gardiner looks like a welcome solution. The move is entirely selfless – the Matthews have no real estate in the area; the park serves a clear civic need. And the project's landscape architects call themselves Public Work. Their brilliant scheme calls for the space to be shaped by the presence of community groups, perhaps by do-it-yourself building or planting, and by the continuing evolution of the area. The process of public consultation, said Public Work's Adam Nicklin, "will really give shape to it. We believe strongly that that is how you make a great place."

This is messy. It is complicated. And for the place that calls itself "a city within a park," it is the future. 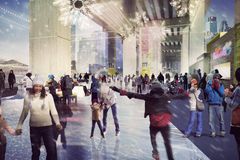