It is a slow, noisy and jarring trip below Eglinton Avenue now – but eventually the tunnel this train is helping build will carry modern transit that whisks passengers smoothly along the busy road.

Far from the public gaze, deep under the uptown road, tunnels for a light-rail line are being bored through the glacial till. About 1,000 cubic yards of spoil are brought out daily by crews that work around the clock, aiming for the LRT to enter service in 2020.

In spite of the scale of the $5.3-billion Crosstown project, much of the work is being done out of public sight, with little but traffic woes on Eglinton Avenue as a reminder that construction is under way 16 to 20 metres below. But on Tuesday, a handful of journalists got a chance to see the Metrolinx project first-hand.

"The LRT will be a little quieter, and smoother," resident engineer Gary Kramer joked as the group rattled along in a rail car hitched to a small diesel locomotive.

About a kilometre down the tracks, the trailing gear of the massive tunnel boring machine came into view. The TBM is lagging a bit behind its mate in the adjacent tunnel, having started boring later, and the visiting group was now deep beneath the Caledonia Road area.

The Crosstown is the most ambitious Metrolinx project and would be the first light rail line in the city. About 19 kilometres long, with more than half of that underground, the line is intended to speed traffic along Eglinton Avenue.

There will be a total of six so-called "tunnel drives" to build the Crosstown. The two under way from the west will go as far as the Allen. The two 500-tonne TBMs will then be lifted out and put into a new launch shaft for the two drives to Yonge Street. Two more drives from the east, running from Brentcliffe Road to Yonge Street, will complete the 11 kilometre tunnels.

On Tuesday, the TBM's cutting gear had stopped spinning for the visit – otherwise it would be too loud to hear, Mr. Kramer explained – but it was very much an active work site.

With the visitors crowding against the edges of the tunnel, a load of construction materials was delivered by rail from the launch shaft. Crews muscled the precast tunnel lining segments into position to be unloaded, sprayed them with water and blasted them with compressed air.

Each piece weighs about 2.5 tonnes, and six will be assembled to form one full loop of tunnel. The tunnel back to the launch shaft is complete, with a large ventilation system at the top, a conveyor pulling out spoil along one side and seven pipes with utilities along the other.

Headwalls that will form the box of the stations have been installed at Keele Street and Caledonia Road, and work is under way on one at Dufferin Street. The TBMs go right through headwalls after they have been built, in order to ensure a tight seal, and the two at work in this area are now on either side of what will eventually be the Caledonia LRT station.

After a slower start, the TBMs are pushing forward at a rate of about 15 to 20 metres per day, Metrolinx says.

"We've gotten clear of a number of obstacles," Mr. Kramer said. "If anything, what's been driving the schedule on our project hasn't been the tunnelling, it's been all the surface work."

The tunnellers work around the clock during the week, with a trio of crews dividing up the day among them.

In spite of the long hours underground – with warning signs and self-rescue kits constant reminders of the danger – the site is not without comforts. There was a microwave to heat up food and, during a moment of downtime, workers in the wet and mud shared a bag of potato chips.

Seeing is believing when it comes to LRT
November 29, 2013 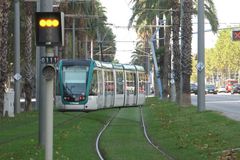 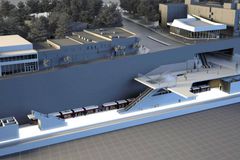 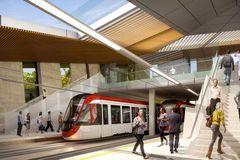