The University of Toronto has told a white nationalist group they are not welcome to hold a rally on campus.

The group — called the Canadian Nationalist Party — has set up a Facebook page promoting a gathering on campus in September to discuss the nationalist movement in Canada and the future of the country.

"We have contacted the group to let them know they don't have permission to use our space," said university spokeswoman Althea Blackburn-Evans on Wednesday.

The university's president, Meric Gertler, said bigotry, hate and violence have no place campus and condemned the deadly clash between protesters and white supremacists in Virginia over the weekend that left one woman dead and 19 others injured.

"As we prepare to welcome students, faculty and staff to our campuses for the start of another academic year, it is important that we reaffirm our collective and unwavering commitment to diversity, equity, and inclusion," Gertler said.

He said those values "are cornerstones of outstanding scholarship, teaching, and learning, which can thrive only by embracing the broadest range of people and encouraging the free expression of diverse perspectives in an atmosphere of mutual respect."

The events in Virginia are an important reminder to speak out against acts of violence, he said.

Heather Heyer, 32, died after a car slammed into a crowd of people protesting a white supremacist rally in Charlottesville, Va., on Saturday. James Fields Jr., described as an admirer of Adolf Hitler and Nazi Germany, has been charged with second-degree murder in Heyer's death. A memorial service was taking place Wednesday in Charlottesville for Heyer.

"The academic community must continue to condemn acts of violence, intimidation, and the fostering of hate," Gertler said in his statement, which didn't mention the Toronto rally directly.

The university said the group has not requested to book space at the campus. The school said they have reached out to Facebook to pull the event page down, although it still existed as of Wednesday afternoon.

The rally is scheduled to take place on Sept. 14, according to that online posting, which sparked a backlash on social media.

Travis Patron, the group's leader, said he still plans to go ahead with the rally and has alternate venues lined up, but didn't provide details.

When asked if he is a white supremacist, Patron pointed The Canadian Press to a video he posted on Wednesday to the group's website.

"We are not a white supremacist, white nationalist, far-right extremist movement," Patron said in the video. "We do not exclusively represent one race of people. We do not believe that any particular race of people is superior or inferior to any other."

He added that the group is against homosexuality, "transgenderism," the "Islamification of the country" and globalism.

"In 1971, 97 per cent of Canada's population was of European ethnicity. Therefore, we demand the suppression of the founding Canadian people, an agenda put forth by Pierre Trudeau and accelerated by Justin Trudeau, be discontinued immediately," is one of the group's demands.

The group could still hold their rally on city property provided they apply for a permit and sign a declaration of compliance with anti-harassment and discrimination legislation.

Spokeswoman Wynna Brown said the city "will not tolerate, ignore, or condone illegal discrimination or harassment and is committed to promoting respectful conduct, tolerance and inclusion when permitting the use of public space and city facilities." 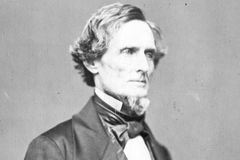 'It's not right': Toronto protesters denounce racism in Charlottesville
August 14, 2017 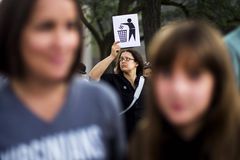 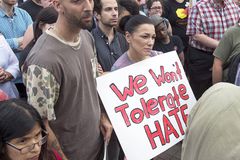