The Union Pearson Express cannot break even at its new and lower fare, an internal report suggests, and will require a hefty per-rider subsidy indefinitely.

Boosters once said that the troubled airport-to-downtown train would recoup both its capital and operating expenses. But the struggling project, which was given to transit agency Metrolinx under the expectation that it would at least break even on day-to-day costs, now appears destined to require ongoing taxpayer funding.

This conclusion is reflected in newly revealed portions of a number of internal reports – which total 228 pages – released late Friday to media outlets that had been pursuing the material through the freedom-of-information process.

The data highlight the risk the government took when it told Metrolinx to lower fares on the UPX. The reports show that it was known internally that lower fares would mean more passengers but also lower overall revenue. When it launched the service last summer, Metrolinx bet on higher fares with the goal of getting to cost recovery as soon as possible. It was a strategy that backfired, as trains ran largely empty and public opposition and financial losses mounted.

A Globe and Mail assessment of the most recent available data shows that fare and other revenues fell $23.3-million short of operating costs over the first eight months of UPX operation. The result was a taxpayer subsidy of about $46 a rider, considerably more even than the Toronto Transit Commission gets for each user of its Wheel-Trans service. Metrolinx would not speak in detail to The Globe's analysis, and argued that the subsidy is not normally calculated for a partial year.

Although early figures suggest that ridership did surge after the cost dropped last month to $13, or $9 with a Presto fare card, the average price paid and the total revenue earned since the change have not been revealed. As a result, it's unclear whether the new fares have left the train on stronger financial footing. It's a crucial point for a train that was explicitly pitched to break even within three to five years, but one which has been losing huge amounts of money since its launch last summer.

While ridership forecasts at the new price point have not been released, making it impossible to project the subsidy that may be required, the math on how many passengers could be carried suggested breaking even was no longer possible. And one of the internal reports released this weekend supports this conclusion.

The March, 2012, report, from consultants Steer Davies Gleave, included projected revenue at fares ranging from $10 to $30. It found that ridership would be highest at the lowest cost, totalling some four million people by 2020. But the report also showed that revenue would be lowest at that $10 price point – which is roughly the same as the current fare – producing about $40-million a year.

Using the SDG figures suggests that unless costs can be reined in on the UPX, the current fares could lead to ongoing shortfalls of at least $20-million a year, meaning each rider would need to be subsidized from the public purse to the tune of $5.

Neither Metrolinx nor the provincial government would speak to the possibility of an ongoing per-rider subsidy for the UPX.

Parts of the reports have been made public before and several key figures were released to The Globe in February. But as a package, they offer greater insight into how Metrolinx set the UPX fares.

The newly revealed information in the reports paints a picture of a transit agency that knew price was overwhelmingly the most important factor in attracting passengers, but chose to charge more in hopes that having fewer riders, each of whom would pay more, would lead to higher revenue.

The material also shows that Metrolinx was not reflecting its own research when it justified the $27.50 one-way fare by billing it as a "premium" service. According to a business plan commissioned from Deloitte, potential passengers cared little about the on-board experience. 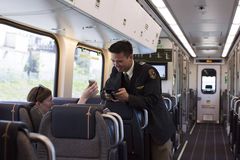