Margie Singleton started working in libraries when she was 15. Her first, in Kingston, was a solid, traditional affair with hushed rooms, watchful librarians and long drawers filled with cards cataloging the books by title, subject and author.

Forty-four years later, she is about to preside over the opening of a new library that would have startled her younger self. The Vaughan Civic Centre Resource Library on Major Mackenzie Drive is the latest in library technology and design. Designed by Toronto's ZAS Architects, it is all glass and metal on the outside, all light and space on the inside. Like the new Fort York and Scarborough Civic Centre branches of the Toronto Public Library, this one throws open the doors and lets the sun shine in.

Ms. Singleton, who is chief executive of the library system in Vaughan, the sprawling suburban municipality north of Toronto, beams at the idea of introducing the $15-million marvel to the public at the official opening on Saturday. It has been open to visitors since May, but she says many people still drive by and say, "What is that? No one would think it's a library."

The library's sweeping, curving walls were inspired by the roller coasters at the nearby Canada's Wonderland theme park. At its centre is an open-air courtyard with a spreading maple tree.

The open, airy spaces inside are designed to be casual and flexible. Librarians don't stand guard behind circulation or reference desks any more. They roam around, ready to help, with lanyards around their necks to identify them. Books are displayed in the front lobby the way they would be at a big-box bookstore, a "merchandising" approach designed to draw people in. A staffer even visited a local Chapters to take measurements of the book-display racks so the library could copy them. Ms. Singleton isn't afraid to borrow.

In place of the rows and rows of desktop-computer screens found in some modern libraries, this one has a station that lends out iPads and laptops for use on the premises. Like a coffee bar, the building has lots of plug-in points where people can charge their devices. It has a coffee bar, in fact, offering a variety of exquisitely healthy snacks.

Today's libraries bill themselves as places of collaboration and creation as well as learning. It tickles Ms. Singleton that an elderly man comes in to paint, on a canvas he sets on one of the library tables. If he happens to spill some paint on the carpet, well, the library will just clean it up.

As a handout puts it, the building's "dynamic, multifunctional spaces embody the library's transformation, from a place of solitude and reflection to one of social connection and creative discovery."

Architect Paul Stevens says his firm set out to create a building that doesn't take itself too seriously. It even has a pet milk snake in an aquarium for kids to watch and pet. A bit of a slacker, it's named The Dude.

Four two-person meeting rooms and four group rooms offer space where people can talk without bothering the readers nearby. In the big, open study room, everything is on wheels – tables, chairs, shelving – so it can be cleared for larger gatherings.

But even in this super-modern, right-up-to-date, digital-ready palace, books are still the main attraction. "We tend to highlight the cool things, but our core business is still exceptionally strong," says Ms. Singleton. "Our business – our biggest business – is books. Nothing wrong with that. We're proud of that."

Though patrons search for books online, check out their book electronically at self-serve kiosks and return their books through a scanner that prepares them for shelving, they still cherish these relics of the ink-and-paper age.

Even with all the other things on offer, from video games to DVDs, even with all the world's knowledge a click or a touch away on one screen or another, books, lovely books, still have their old magic. Vaughan's clever librarians like to display them cover out, and they face visitors at every turn: books on wellness, books on fashion and style, books on the Wonders of the World, books on learning foreign languages, books on "prophecies, predictions and premonitions," children's picture books, junior graphic novels, books on making the most of retirement.

The new library has no less than 54,813 books under its roof and, altogether, Vaughan's libraries hold 448,802. E-books and e-audiobooks still account for just 1.8 per cent of the system's total circulation.

The brilliant design of the new library may pull people in and encourage them to stay, the technology may entice them to create and the meeting spaces to collaborate, but, even in the year 2016, lots of people still come to libraries just for the love of books.

Opinion
Get thee to a library: It’s more important than ever
May 5, 2016 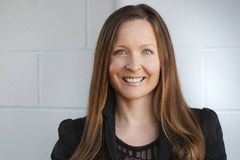 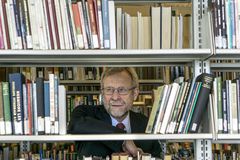 The reinvention of libraries, from public spaces to living rooms
March 23, 2016 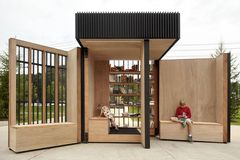