Inspectors with Ontario's Ministry of Labour, forensics, and the coroner's office are combing through the wreckage of the stage that collapsed Saturday during setup for a Radiohead concert in Toronto.

They're trying to find out what caused the stage to come crashing down on a handful of workers.

The collapse at Downsview Park crushed one of Radiohead's technicians to death and injured three others with the band. A spokesperson for Radiohead identified the man who died as Scott Johnson from South Yorkshire, England, a 33-year-old drum technician for the band.

An unidentified 45-year-old crew member was still in hospital Sunday with non-life-threatening injuries. Two other crew members were treated for minor injuries on the scene and released. All of the victims were crew members setting up the stage, police said.

Ministry spokesman Matt Blajer says the massive structure is "still fairly unstable" and work is underway to make it safe.

He says investigators are looking to see whether safety regulations and standards were followed and staff were properly trained.

He says the investigation is "fairly complex" and it could take some time to figure out exactly what happened.

There was a popping crack, like the sound of fireworks, then an eerie silence as Erin Peacock watched the towering stage crumple in on itself, hardware-laden canopy tipping over towards the front end of the stage, taking reams of scaffolding down with it and leaving long sticks of twisted metal behind.

The immediate aftermath of the collapse was quiet enough for Ms. Peacock to hear everyone with her in the beer tent collectively gasp as they watched - close enough to see stagehands sent scrambling, too far away to hear them shout as the stage fell.

Ambulance sirens broke the silence and snapped Ms. Peacock and her sister back to reality. The two were supposed to be bartenders at Radiohead's Saturday night concert - a first for Ms. Peacock's younger sister, who just got her SmartServe certification. Instead, they watched an outdoor stage become a death trap.

"We didn't see any ambulances speeding off immediately, which led us to believe either everyone's okay or people are pinned," Ms. Peacock said.

It turned out to be the latter: As the top portion of the stage fell, it trapped one man beneath the debris. While a team of paramedics was already on the scene in preparation for the concert and tended quickly to the other hurt crew members, they couldn't reach the last victim until police and firefighters managed to extricate him.

That man, Scott Johnson, was pronounced dead at the scene - a "crushing injury," paramedics said.

Ms. Peacock said there were about 10 crew members on the stage when it collapsed. It seemed they were about to do a sound check - electronic twangs piping through the speakers were what made her look up just before the structure fell.

Lindsey Bradbury, an employee at Handpicked management, was preparing to work in one of the beer tents when she noticed the commotion. She said people were hanging screens on the stage just prior to the collapse.

Once the stage fell, she could hear people yelling "First aid!"

The concert facility at Downsview Park was newly renovated. Radiohead and their opener, Caribou, were to be the first performers there.

"The only thing I can confirm is that IATSE Local 58 was not involved with the building of the stage or supplying any labour for the concert," he wrote in an e-mail. "Regardless of who was involved, the stage collapse is a tragic event and we offer our most sincere condolences to the family of the deceased and our thoughts are with those who were injured."

Police said subsequent events at Downsview Park - including a Sunday run for girls in Grade 3 though Grade 8 - would continue as planned.

Live Nation, the company organizing the concert, declined to comment, referring questions to a spokeswoman for Radiohead who did not return calls or text messages Saturday. Radiohead tweeted that "Due to unforeseen circumstances tonight's [concert] at downsview park has been cancelled. Fans are advised not to make their way to the venue."

This isn't the first time an outdoor stage at a Canadian concert has collapsed, sometimes with fatal consequences. Several people were hurt last July when the stage at Ottawa's Bluesfest collapsed as Cheap Trick playing. In 2009, the main stage collapsed at Alberta's Big Valley Jamboree, near Camrose, killing one woman and injured several others. Panhandle Productions, Global Production Co. and a numbered Alberta company all faced dozens of charges coming out of the Big Valley Jamboree stage collapse, but Crown prosecutors stayed the charges in January, citing low likelihood of conviction.

A key difference, however, is the weather: Both the Bluesfest and the Big Valley collapses happened during stormy windstorms that some have said could have played a role in the accidents.

"How does something like this happen?" Ms. Peacock asked. "I've seen reports of stages collapsing before, but it's always been due to weather conditions and whatnot. There was no weather condition today. It was a beautiful, warm sunny day." 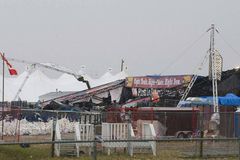 How the Ottawa Bluesfest stage came down - and why it could happen again
July 18, 2011 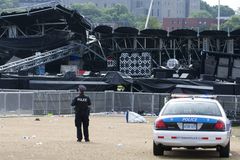