Fourteen minutes before the fire alarm went off at 335 Yonge St., someone slipped away from the building, down a fire escape on the east side.

The 19th-century building's entire third floor was fully involved with the fire by the time firefighters arrived, four minutes after the alarm went off at 4:04 a.m. on Jan. 3, 2011. Flames were starting to penetrate through an opening on the building's north side, where the building's had collapsed dramatically eight months before.

The new details are from the Office of the Fire Marshal's report, which is contained in one of three lawsuits resulting from the alleged arson and wall collapse at the former site of the Empress Hotel. HMV Canada Inc., which had a location beside 335 Yonge, is claiming damages from the property owners and city.

The fire marshal's report is contained in an affidavit asking the court for extra time because of the ongoing police investigation.

Last month, a year and a half after the fire, police charged 53-year-old Stewart Poirier in the alleged arson. Lawyer Dana Garrick said previously that Mr. Poirier has mental-health issues but no major mental illness. Mr. Poirier's judicial pretrial is scheduled to begin Sept. 10.

"I'm looking into all avenues in regards to this investigation and whether or not this person acted alone," Det. Harris said in an interview. "It's in the best interest of this investigation that it not be solely concentrated on Stewart Poirier."

It's believed the fire started on the third floor, spreading quickly to the combustible walls, ceiling and floor, according to the OFM report. The hole in the roof and wall, created by façade collapse, added ventilation to the flames. Racks of clothing, left from one of the six businesses that operated out of the building until the collapse, caught alight.

The report lists fraud as the motive but lead investigator Mike Ross, who wrote the report, said it was just one of the possibilities being considered at the time.

He said the report was finished before police made an arrest. He said the document would not normally be public and was released to a lawyer because of an administrative error.

The report says the ignition source was matches or lighters.

Investigators would eventually seize eight pieces of the third floor, an empty mason jar and a mass of melted plastic. The report says the exhibits were sent to the Centre of Forensic Sciences for examination. None contained evidence of "volatile organic substances" but it's possible they could have been consumed by the fire, the report says.

Accidental ignition was ruled out in the fire – which caused $1.55-million in property, content and exposure damage – and the OFM's conclusion was that it was set on purpose.

The timeline created from video surveillance showing someone leaving the fire escape 14 minutes before the alarm went off wouldn't allow for the fire to have been started by smoker's materials, the report says. As well, hydro and natural gas were turned off because of the collapse. 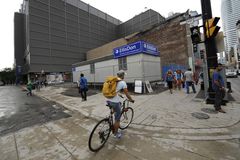 The crumbling state of heritage preservation in Toronto
February 11, 2011 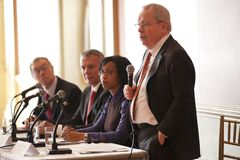 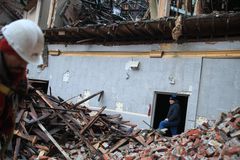