This is the second in a four-part series examining support programs and services for lower-income residents in Mississauga, Brampton and Caledon – the cities and towns of Peel Region more known for their affluent middle and upper classes than a growing population who live in poverty.

When Gabrielle Biggers was admitted to the Centre for Addiction and Mental Health in Toronto, she thought she knew what the results of the initial medical screening would show. She knew she'd been using "bad drugs," and things had gotten so out of control that her father had finally packed her in the car and driven her into the city from Mississauga for treatment. But then the results of the pregnancy test came back – positive.

Ms. Biggers was just 15 at the time, but she'd been skipping school and increasingly using drugs and alcohol.

Imagining a future as a parent was a different story. She cut out the drugs immediately and started making plans to keep her daughter Genna, who was born healthy and is now two years old.

One of the first steps was finding a way to finish high school, so when Ms. Biggers, now 18, was about seven months' pregnant, she started the Vita Centre's Parenting and Catholic Education (PACE) program.

Located in an unassuming strip mall just off Hurontario Street in Mississauga, the Vita Centre is largely tucked out of sight, around the corner of the complex.

Inside, the centre looks equally nondescript at first, with little but a reception desk in the entranceway. But down a hallway around the corner, the child-minding area is strewn with toys and the "Care Closet" donation room houses overflowing bins of baby clothes, formula and supplies next to boxes of diapers stacked to the ceiling. During the school year, up to 15 young mothers attend an alternative high school program in a small classroom at the centre, while volunteers look after the girls' children just outside.

The centre runs parenting classes, counselling sessions and events where parents aged 15-30 can connect, but executive director Deborah Thomson says the realities of working in the Region of Peel mean most of the work is done outside the office. Split between the denser cities of Mississauga and Brampton and the rural area of Caledon, Peel now has a population of 1.35 million, making it the largest municipality in Ontario after Toronto. And reaching out to the growing number of vulnerable residents who live in the region's expanding low-income neighbourhoods is a challenge for service providers like the Vita Centre.

A key part of the centre's mission is the one-on-one counselling service, which focuses on developing self-reliance and resilience among young parents. The hope, Ms. Thomson says, is that the young parents will gain the skills they need to stop the cycle of poverty – nearly everyone they work with is "living at or on the cusp of poverty."

The staff at the centre believes so strongly in the effectiveness of tackling the issues underlying poverty through counselling that they've added a sense of incentive to the sessions. Clients get access to Care Closet items only after they've committed to at least three meetings with a counsellor.

But with just one office in Mississauga and a smaller satellite location in central Brampton, it's not easy for the centre to get the word out to everyone in Peel, where the proportion of residents who live in a low-income neighbourhood rose from two per cent to 50 per cent between 1980 and 2010, according to University of Toronto research.

"We're really driven by the fact that we hope that we're able to assist the clients with whatever is bothering them before it escalates – before it becomes a major problem not only for them but also for the [health-care] system," Ms. Thomson says.

The three counsellors on staff often have heavy caseloads, and Ms. Thomson says finding the money to keep pace with the community's needs is always a concern. Peel Region provides some funding, but the centre gets the rest of its $850,000 budget through grants and fundraising.

For many of the Vita Centre's clients, who might not be able to access or pay for transportation, the network of highways that cross Caledon, Mississauga and Brampton can also be a barrier to reaching desperately needed services.

"Whenever we do anything, we have to think about, 'What's the bus route?'" Ms. Thomson says. "What we've done to modify and help that is a lot of our counsellors do most of their work out in the community. We don't make the clients come here. We go meet them at the closest Tim Hortons or whatnot to their homes."

Some of the centre's clients, she points out, aren't even old enough to have a driver's licence, and navigating transit with a baby can be overwhelming for a new parent, making outreach work even more crucial.

Unlike in York Region to the east, the municipalities in Peel deal with transit separately. Mississauga and Brampton have their own systems, while the town of Caledon, in the northernmost part of Peel, has no system of its own.

Ms. Biggers was lucky: She lives close to the Vita Centre, and was able to manage taking the bus with a baby until she got her G2 licence earlier this year. For her, getting to the centre was crucial – for school as well as counselling sessions, which she says helped her become a much healthier parent.

Driving the highways between Mississauga and Brampton is often a given for Ms. Thomson, too, whether she's heading to a Vita Centre event or a meeting of the Peel Parenting Collective, a collaborative that researches issues facing parents in the region.

Diane Myers heads up the collective of 13 organizations involved with parents and children in Peel that is currently working on a project examining parental stress. The organizations target a diverse range of clients, but finding ways to reach people in Peel who are falling through the cracks is a universal struggle.

"Our challenge is to stop doing things that aren't working, and to try to figure out how to reach a population base – taking into account the vulnerable groups we've decided to make an effort at reaching better," Ms. Myers says.

Ms. Biggers almost slipped through the cracks once, but she says the Vita Centre helped her gain stability. She earned a parenting certificate and finished high school this year after transferring to a program where she earned dual credits toward both a high school and college diploma.

She already has some money saved for Genna's education, and the future no longer seems like an empty void: In the fall, Ms. Biggers is starting a culinary management program in Barrie – she already has a job and daycare lined up, and she's getting her own place. Maybe, she says, she'll own her own restaurant one day.

While she says she still has struggles, she's ready to move forward. 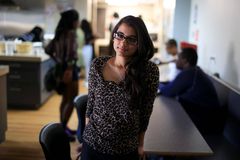 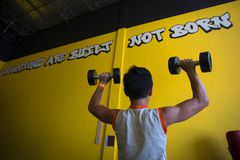 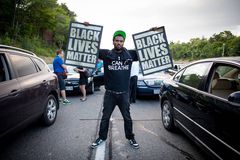