No one's really sure why waffles are the chosen symbol of Leaf fan frustration, but waffle-thrower Joe Robb says his emotions got the best of him.

Mr. Robb was removed from the Air Canada Centre during Monday night's game against the Atlanta Thrashers after he threw a box of Kellogg's brand Eggo waffles over the boards, halting play. He was subsequently charged with mischief.

"I didn't intend for it to hurt nobody and maybe I shouldn't have done it while the play was going on," the 31-year-old Oakville resident told The Globe and Mail Wednesday. "I totally love the Leafs and that's pretty much my hobby, to watch the team play."

Mr. Robb, who describes himself as a diehard fan, said he spends a big chunk of his paycheques to see the boys in blue and white (although he wouldn't name his employer). He said he's been to three games this season and estimates he's attended 30 to 40 in the past five years.

He said Monday's late-game toss was "just frustration" over the Leafs' poor performance as they trailed 5-1 - although he did bring the waffles to the arena. "I'm not there to get publicity," he said.

He said even he isn't clear why waffles have become the projectile of choice for disgruntled Leafs fans. He was just following suit, he said, after a man, only identified as "Jack M.," made the last breakfast-food toss at the end of a game against the Philadelphia Flyers on Dec. 9.

Although he wouldn't have been surprised if he was fined, Mr. Robb said he was a bit put-off about the charges and how the whole incident has blown up in the media. He has also been banned from the Air Canada Centre, and Maple Leaf Sports and Entertainment's other venues, for what he suspects is the rest of the season. Maple Leaf Sports said the ban is "indefinite."

Mr. Robb said he guesses the charges are a result of actually stopping play, but he said throwing stuff on the ice is not new to hockey. "I've seen hats been thrown on the ice," he said. "Why can't waffles be thrown?"

Detroit Red Wings fans are notorious for hurling dead octopi on the ice for luck during playoff season.

Mr. Robb, who is scheduled to appear in court on Jan. 27, said he doesn't regret throwing the box, except maybe now "because it's such a big deal." But he said he is planning to make it up to his team. "I'm going to try to get in contact with them and apologize," he said.

As for his Maple Leaf spirit, Mr. Robb said he'll be back - as soon as the entertainment complex lets him. "I'm always going to be there to support the team," he said.

Meanwhile, other Leafs fans can't seem to understand why waffles have been making their way to the ice either, but they're having fun with it. Internet memes are already building up, with animated graphics and altered videos of fans and even players chomping down and tossing the breakfast food at games.

On Monday, a Facebook fan page and matching Twitter account appeared called "Maple Leafs Waffle Guy." Its purpose was described on Facebook as, "Celebrating the man who had the courage to throw a delicious, nutritious breakfast on the ice during Leafs games." A "Waffle Nation" shop on Canadian custom apparel site Wordans offers scarves, shirts, bags and pet attire with a spoofed golden logo.

And while many may be laughing over the recent display, veteran Toronto lawyer John Weingust said the charge against Mr. Robb is "ridiculous."

"Normally they would never lay a charge of that particular nature," Mr. Weingust said. "It's just vindictive." 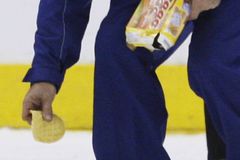 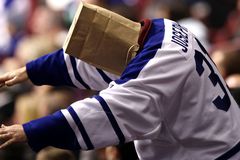