Thomas Mihalik stands at the busy front of his men's clothing store, bidding goodbye to a rabbi from the small synagogue down the block on Baldwin Street.

Mr. Mihalik's father opened the store in 1958, a time when the Jewish character of Kensington Market was still somewhat intact. Since then, Tom's Place has grown to take over four narrow storefronts. That makes it one of the larger establishments in the cramped confines of this diverse and busy warren west of Spadina Avenue, between College and Dundas streets.

But even at four storefronts, Tom's Place stands to be dwarfed by what could be Kensington's newest merchant.

The spectre of a Wal-Mart on the outskirts of Kensington loomed over the market this week after RioCan Real Estate Investment Trust re-submitted plans to build a three-storey, 130,000-square-foot retail complex on Bathurst Street south of College Street. This time around, RioCan has confirmed rumours that Wal-Mart would be the chief tenant, with a smaller downtown version of its suburban store model occupying the top two storeys.

Last year, Toronto's committee of adjustment – and then the Ontario Municipal Board – rejected what was essentially the same proposal, saying its size and bulk would demand a zoning by-law amendment. The real estate investment trust is now requesting one, which means city councillors, and locals, will weigh in .

Area councillor Mike Layton says that while Toronto's official plan does call for development on major "avenues" such as Bathurst, there are other aspects of the development that are in "direct contradiction" with the plan.

"We don't put big-box retail in the middle of areas with vibrant economies. And we don't put car-dependent uses in areas with good public transit," says Mr. Layton.

"The size of the retail space is not appropriate," he adds. "We're going to have to send that message from community council."

Councillors won't be the only people getting a say this time around. The proposal will now be subject to community input, one thing that's never out of stock under the storefront awnings of Kensington.

Mr. Mihalik does not welcome the multinational discount department store. "There will be competition," he says, expressing concern for the area's many grocers. "Years ago, the market was the only place you could buy ethnic food. Even going back to when that meant rye bread and garlic. But now, the larger stores have caught on."

Around the corner on Augusta Avenue, grocer Cecilia Espinoza grimaces from behind a small counter when told about the reapplication. She's owned Latin America Emporium for 23 years, but says business isn't what it used to be, in part because of competition from larger stores. "Whatever we sell, they sell," she says. "But they buy by the container, I buy boxes. If they go 100 per cent on the markup I have to go only 35 per cent to compete."

It's the fate of these independent grocers that most worries Dominique Russell from Friends of Kensington Market. "There's a reason they call it 'The Wal-Mart Effect,' " says Ms. Russell, explaining the theory that Wal-Mart outlets succeed by driving smaller competitors out of business.

Produce sellers "are the heart of the market," says Ms. Russell. "They also have the thinnest margins and are the most vulnerable to competition and high rents."

She says these independent stores keep the market a unique neighbourhood. "When we shop at a neighbour's store, the money stays in the community," says Ms. Russell. "That's not the case with Wal-Mart. It will be sucking money out of a community and putting it in a corporation."

Though opposition seems to be the majority stance, in true Kensington anarchist fashion, countering views are available.

Among the folk art and one-of-a-kind clothing packing the racks and displays of Courage My Love on Kensington Avenue, a shopper approaches the counter to ask about the fit of the white formal shirt he's trying on.

Owner Cece Scriver nods approval. The customer retreats and Ms. Scriver explains that the stocking of formal attire is a holdover from the mid-seventies. When her parents started the store, they sold what their friends needed. Their friends were artists, so obviously they needed formal wear – for the catering jobs they held by night.

Ms. Scriver isn't exactly in favour of having a Wal-Mart on Bathurst, but she expresses a confidence in the resiliency of the unique stores of the neighbourhood that's been her home since she was born.

"I buy socks at Wal-Mart," confesses Ms. Scriver. "But we do it differently here. There have always been people who say, 'I'm going to come in and blow Kensington Market out of the water,' " she says. "In the end, the market changes them." 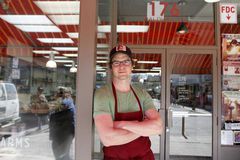 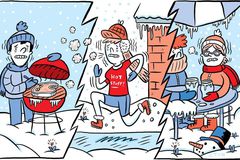 Toronto makers and hackers share a philosophy on tools
March 15, 2013 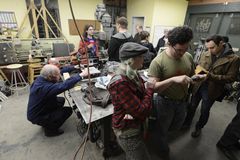 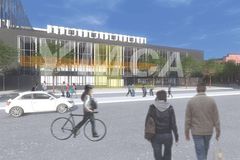 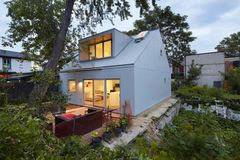