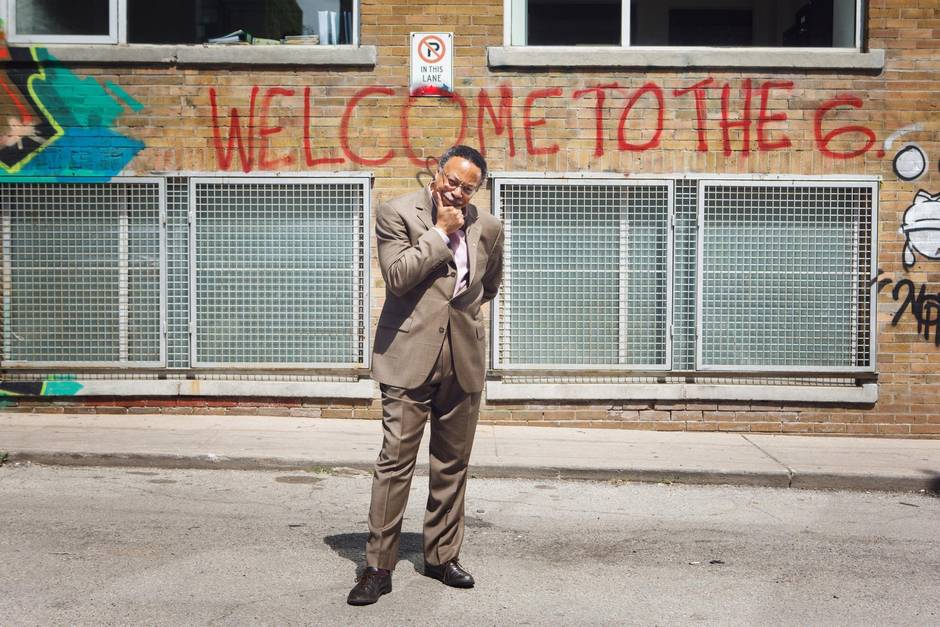 Toronto’s newest nickname, The 6, has been immortalized in song and in graffiti. University of Toronto professor and Toronto Poet Laureate George Elliott Clarke is photographed in a Toronto alley July 9, 2015. (Jennifer Roberts for The Globe and Mail)

Credit Drake for popularizing it. But on the anniversary of Toronto’s latest nickname, its permanence is a democratic affair

Forget “T-Dot.” Same goes for the “Big Smoke.” Don’t even think about “Hogtown.” If you’re not calling Toronto “The 6” yet, then you’re doing it wrong.

This month marks the anniversary of rapper Drake officially declaring a new nickname for his hometown. It came in the way of a July 14, 2014, announcement of the title of his yet-to-be-released new album: Views from the 6.

As The 6 quickly became a worldwide trend on Twitter, there was – and still is – confusion about what it even means. And lodged between those questions were heaps of skepticism and sarcasm from Torontonians, brushing off the name as something that would never stick.

“WE DONT CALL IT THE 6 BRO,” wrote @ProllyJohnny “We don’t like that name,” tweeted @DanBootleg, attributing the derisive quote to all of “Toronto.” MTV’s Desus Nice even chimed in from a distance: “‘The 6 is the nickname for toronto’ – no one.”

A lot seems to have changed in a year, though, as The 6 – sometimes written as The 6ix or The Six – is here to stay. And thanks to the enthusiastic endorsement of celebrities, athletes and, yes, Torontonians alike, The 6 has become one of the most famous handles the city has ever been given – and one its residents seem proud to wear.

It all began with Drake himself and his omnipresent pop-culture presence. After his surprise mixtape If You’re Reading This It’s Too Late hit the No. 1 spot on Canadian and U.S. charts this year, he became the first rapper to top the influential Billboard Artist 100. Kanye West declared in an interview with GQ last year that Drake was the most popular man in rap music.

Throughout Drake’s ascent, his hometown has factored prominently in his music. “Toronto is the reason I do this,” he says in a new video collaboration with Sprite. “All I did was find a way to make people proud of our city.”

So when he tweets or posts to Instagram, his 33 million or so followers pay attention. A quick social-media search for #The6 returns countless results. One prominent example saw actor Will Smith, who has been shooting the film Suicide Squad in Toronto, posting a selfie on Facebook in front of the CN Tower. “Chillin in the hotel. Lovin’ the 6,” he wrote. Still, it’s mostly Torontonians who have taken to the positive energy the nickname has come to embody.

“Born in #the6. Raised in #the6. Live anywhere in the world, but home will always be #the6,” said Toronto native Richard Picart in an Instagram selfie in front of the CN Tower.

What does The 6 say about Toronto in 2015 that Hogtown or Big Smoke can’t? George Elliott Clarke, our poet laureate and an English professor at the University of Toronto, sees his city looking to find itself – again.

“All of these various combinations of nicknames over the years suggest the identity of the city remains in flux and changes generationally,” he said. “The identity remains very unsettled, and I think that’s good. Part of the creative tension of Toronto is that it is such a mixture of various cultural influences.”

Mr. Clarke says just because one nickname is growing in popularity, it doesn’t mean the others have to fade away completely.

“Some may nervously say we aren’t united, but I don’t think so,” he added. “I could see a future where The 6 co-exists with the Big Smoke. And Hogtown certainly hasn’t disappeared – the hogs have, but the name hasn’t.”

Drake is certainly doing his best to make The 6 our most beloved moniker. His role as an ambassador for the Toronto Raptors has given him a huge platform to connect with an influential set of rich, globetrotting basketball players who appreciate his hip-hop credentials. When picked by the Raptors in the NBA draft last month, Los Angeles-born Delon Wright tweeted a message that noticeably had more to do with Drake than the team: “Wow words can’t describe how I’m feeling…Headed to the 6ix !!!!!”

Drake also has his own popular line of clothing, called October’s Very Own, with many items featuring a stylized 6. The collections often sell out online or produce long lineups at the OVO store on Dundas Street West.

Close listeners of Drake’s music quickly find his love for Toronto goes beyond simple name-checking. Consider the millions of fans who have memorized highly personal, specific lyrics about Kennedy (the song Energy), Weston and Scarlett roads (You & The 6). The most seminal Toronto reference comes in the crowd-pleasing track Know Yourself, where the chorus has become an outright singalong on Drake’s world tour, with everyone repeating: “Runnin’ through The 6 with my woes/You know how that should go.” (“Woes” itself, supposedly an acronym for “working on excellence,” is a Drakeism that has reached meme levels of pop-culture saturation.)

To be fair, Drake admits he didn’t come up with the nickname. He gave credit to its alleged creator by way of a hashtag – “#JimmyPrimeNamedIt” – on Instagram. (Jimmy Prime is a Toronto rapper with Drake ties.)

As for the meaning of The 6, that is still up for debate. Early speculation pointed to the city’s area codes – 416 and 647. The other theory gaining credibility involves the 1998 amalgamation of Toronto, when the six different boroughs – Etobicoke, North York, Scarborough, York, East York and Toronto – became one city.

But even if Drake eventually reveals the etymology, Mr. Clark says it’s the people who will decide when, where and how this moniker will be adopted and communicated – and for how long.

“Only an idiot would try to throw any impediment into the democratic dispersion of a particular term,” he said. “How much permanence this kind of moniker has will depend very much on how people choose to interpret The 6.”

Will Smith used The 6 in the caption of a public Facebook selfie. City councillor and former deputy mayor Norm Kelly has tossed it into his prolific daily tweets. Then there are athletes such as the Toronto Blue Jays’ Jose Bautista or the many Raptors using it on Instagram. Other examples include W magazine’s arts and culture director, Diane Solway; Canadian singer-songwriter Dan Talevski; lifestyle blogger Casie Stewart; and many, many more.

The Community Bicycle Network held a storytelling event in June called Rolling Through the 6. Meanwhile, #DevTO held a creative hackathon called Hack The 6 where “artists, developers and dreamers” came together to innovate. The Toronto Tool Library has also used it when advertising events on Twitter, such as its community nights or bookbinding workshops. On July 30, Empress of Canada will have the only daytime cruise for Caribana, called Cruise in the 6.

The buzzy messaging app Snapchat this week added a The 6 sticker that can be overlaid on pictures taken in Toronto. Canon Canada posted a how-to YouTube video on shooting the perfect skyline called The Six After Six. Bank of Montreal told Twitter users it can help those “looking to live in #the6” find their home court.

In Running Through the 6 (free for iOS, less than $3 for Android), you play as a cartoon Drake, hopping from rooftop to rooftop collecting emojis depicting The 6, praying hands and the number 100. Just make sure you don’t hit the International Symbol of Access logo – no doubt a homage to Drake’s Degrassi role as “Wheelchair Jimmy” – as you’ll lose your ability to jump to the next building. As you wait for the game to start, you’re told that “if you’re reading this it’s loading.”