All of Toronto – perhaps all of Canada – will be watching Monday at 10 a.m. to see if Mr. Justice Charles Hackland decides to kick the city's controversial, populist mayor out of office. Rob Ford is accused of breaking the Municipal Conflict-of-Interest Act when he voted in February 2012 to relieve himself of the requirement to pay back $3,150 in improper donations to his football charity. The penalty for violating the MCIA is automatic removal from office. If Mr. Ford loses his job, Toronto's political future would be thrown into turmoil. Here's what could happen after the ruling comes down:

What if the court finds Mr. Ford DID NOT contravene the MCIA?

That's an easy one: The mayor keeps his job. Mr. Ford could suffer some reputational damage if Judge Hackland takes him to task in the ruling, but Toronto's alligator-skinned mayor would probably shrug it off. In this scenario, the biggest dilemma facing Mr. Ford would be whether to stay for the entire council meeting Tuesday or leave early to lead his high-school football team, the Don Bosco Eagles, onto the field at Rogers Centre for the Metrobowl.

What if the court finds Mr. Ford DID break the Act?

The MCIA says the court "shall" remove the elected official. Mr. Ford would be booted from office, effective immediately.

Wait a sec. Can't he appeal?

According to John Mascarin, a municipal law expert at Toronto firm Aird and Berlis LLP, the mayor would have 30 days to file an appeal to Divisional Court, which tends to move more rapidly than the Court of Appeal. Still, it could take months or even years to exhaust every avenue of appeal. In the meantime, Mr. Ford would have to seek a temporary stay of the judgment to hold on to his job. It is difficult to say whether the court would acquiesce. "I don't think it's automatic, [nor] do I think it's a really, incredibly high threshold," Mr. Mascarin said Friday. "My view is I think he would get the stay." He is not aware of any cases like this where a stay has been granted. Neither is Maureen Whelton, one of the lawyers who handled the successful appeal of a lower court decision that initially found a Catholic school board trustee violated the MCIA. In September, Ms. Whelton predicted winning a stay would be "very, very difficult to do."

Let's say the court refuses to stay the judgment. Now what happens?

Toronto's political future would be in the hands of city council. According to the City of Toronto Act, council would have 60 days, starting Monday, to decide whether to appoint a caretaker mayor to serve until the next general election on Oct. 27, 2014 or call a by-election. Although council is scheduled to meet Tuesday and Wednesday, it is unlikely – but not impossible – councillors would try to replace Mr. Ford before he had the chance to seek a stay of the judgment. They will probably call a special meeting on the issue before the December holidays instead. In the meantime, Deputy Mayor Doug Holyday would assume "all powers and duties of the mayor," according to a city spokeswoman.

So who could councillors appoint?

Technically, anybody they like. Well, pets wouldn't qualify. The City of Toronto Act says only that council must select "a person" to fill the vacancy. However, council passed a policy in 2000 saying it must select one of its own members. A fierce fight would no doubt ensue to find a candidate suitable to all sides on Toronto's deeply divided council.

What if council decides to go the by-election route instead?

From the day council makes that choice, the clerk would have to set a nomination date within 60 days or less. Voting day would be 45 days after that, according to the Municipal Elections Act, meaning Torontonians would head to the polls in February or March. Cost for a by-election: Approximately $7-million. If the judge finds Mr. Ford contravened the MCIA, but chooses not to ban him from running again, Mr. Ford could run in the by-election. His potential opponents – Adam Vaughan? Shelley Carroll? Olivia Chow? – would have scant time to raise money and pull together a winning campaign. If Ford is banned from running again for a period of time, that does not mean there will not be a Ford on the ballot. Councillor Doug Ford could always run to replace his younger brother. 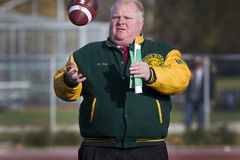