When Vanessa Byrne wants to lift her spirits, she thinks the Gay Village is the perfect place to visit.

But it's not necessarily the perfect place to live. It's too expensive, she says, as she strolls down Church Street on a recent sunny afternoon. The 20-year-old student, who is a lesbian, lives with her family on the Danforth. But, she says, "I come here when I need a pick-me-up."

When the village was first taking shape, it was an asylum – an affordable one – for gay people across Canada. But gentrification has sent rents sky high and some local gay businesses have closed as a result. At the same time, changing attitudes toward homosexuality has opened up other Toronto neighbourhoods as safe spaces for LGBTQ (Lesbian, Gay, Bisexual, Transgender and Queer) people.

As the Pride Parade approaches, the area around Church and Wellesley Streets is also readying itself to be in the spotlight on the world stage – Toronto was chosen to host the first North American World Pride event next year. The Village will be closely involved with the 2015 Pan Am Games.

During Pride Week, The Globe and Mail spoke with several people about the changes happening in the Village and how relevant the neighbourhood is to them. Its evolving identity is top of mind – many who live or spend their time in the village hope there's more change to come.

The Village has a dearth of female-oriented bars, for example – one of the few, Slacks Music Bar and Lounge, closed its doors recently. Others say the Village is sorely in need of more diversity.

"[The] Gay Village is primarily white-centred," says Ranjith Kulatilake, a 49-year-old gay emigrant from Sri Lanka who volunteers with refugees in the neighbourhood. "Initially, for newcomers who come from extremely homophobic, transphobic countries, the Gay Village is very attractive and you can at least walk up and down freely. Only when you begin to scratch the surfaces, you find the barriers."

And yet, the Village is an important place for newcomers, according to an ongoing study by the 519 Church Street Community Centre to examine "the role of a LGBTQ village in a modern, progressive city."

"What most folks have identified is that this is where people come as an initial destination when you're first coming out and that may mean refugees or tourists or different folks who are coming in," said Maura Lawless, executive director of the centre. "It's kind of a home base and from there, they move out."

But the desire remains for "a place to feel free," and for many, that place is Church and Wellesley. Here are some of the voices of the Village on the changes happening there, and its relevance today:

PATRICIA WILSON: The assistant bar manager at Buddies in Bad Times Theatre, 59, is a transsexual lesbian. She has been a Village resident for 21 years

On rumours that trendy Queen West is becoming the new Gay Village: "The difference is that if you're in this community, you can wear a Tony the Tiger outfit and nobody's going to blink an eye.

"You are so safe being an individual on this strip on Church Street, where as if you move out west, you tend to take your chances. It's not the same. It's not as accepting. It's pockets of gay rather than gay."

On the lack of female-oriented bars in the Village: "Women tend to cocoon once they fall in love … I would rather stay home and sit on the balcony with my girlfriend. We read to each other and have cocktails."

Ms. Wilson added that when women, who generally earn less income than men and are more likely to have kids, want to settle down, they often gravitate toward the relatively cheaper houses in Leslieville.

MICHELLE BELMONTE: The 23-year-old lives in the west end. She came out as a lesbian almost three years ago.

On the dearth of lesbian bars in the Village: "It's harder to pick up. We want to be able to mingle with like people."

"I feel safer [in the Village]. I don't feel ashamed.... before I came out, this place helped me... You're in a space where everyone is open and accepting. It's a nurturing environment."

JAMES KWAKU: Etobicoke resident, 29, came to Canada recently from Nigeria, where he was persecuted for being gay

"I've been in Canada six, seven months now. I'm from Nigeria. I came here to be a refugee because I'm a member of the LGBT community. … The [Nigerian] government, they do not accept your thinking. They see you as taboo. You have no respect, no self. … I was about to get arrested.

"That's the reason why I flew from Nigeria to Canada. One of my partner's parents actually came in and saw us [together]. Then, the whole community was shouting and they came in too. My partner was attacked. I managed to escape, but they attacked my family."

"The people [in Toronto's Gay Village] are like my brothers, they are like my family. I don't feel like I lost anybody. … It makes me feel free because nobody judges you because of who you are, or what your sexual orientation is all about. … I feel at home whenever I go there."

"[Spanish speaking newcomers] have many issues. When they come here to this country, or Toronto specifically, they're getting shock with the gay culture. They don't know how to navigate the gay scene. Because of that, sometimes they get in trouble. They can make bad decisions regarding sexual activity... Sometimes, they feel isolated or lonely or depressed because they don't speak the same language... When they meet somebody online or on the street or in a bar, this person can bring them home to experiment in sexual relationship. They may tend to use recreation drugs or alcohol to enjoy the sexual experience. Those are bad decisions because that can expose them more to become susceptible to any sexually transmitted infections or HIV."

ALEX URQUHART: The university student, 23, is a gay male who moved to Canada from Guyana at age 9

"I live very far from the Village [near York Mills and Victoria Park with family] and I hate that. When I'm no longer poor as hell, I want to live near the Village … For my first date when I was 16, I didn't want my mom to know where I was going. So, I went to the Village and that way, I wouldn't have to worry about who I would run into.

"When I walk into the Village, it's literally like stepping over the rainbow. … Now, you're gay until proven otherwise. To me, I think that's what it feels like to be straight everywhere else. My least favourite thing about the Village is that it is overwhelmingly and predominantly white. If you walk through the Village, you'll see all these posters for parties. There's always a white person on it. If there's a man of colour on it, there's a white man next to him.

"I'll go to places like Crews and Buddies. It's just 98 per cent white. … The Village tries in a way. I used to go to [an event] called Rangila. It's a South Asian night and they play Bollywood music. I would go there because I'm Indian."

GEORGE PRATT: A resident of the Village for almost 50 years, Mr. Pratt, 68, is the owner of a private men's bar, Flash, on Church Street.

"I think these new condominiums going up are being filled with gay men. Obviously, there's straight people moving in there too, but there's no shortage of gay men. In the condominium I live in at Church and Wellesley, we are probably 80 per cent occupied by gay men. … This is an expensive neighbourhood to move into. So, we're getting upscale, affluent people – straight and gay – moving into the neighbourhood."

BING LI: The recent high-school graduate, 19, is gender-queer – identifying as both male and female

"I look like a guy a lot. Sometimes, I get kicked out of women's washrooms. Some people actually walk away when I'm standing in line [in stores] and I have to ask for someone else. … [The Village] is a place where so many changes happened to me, where I was actually able to find myself in a way. It's always a really safe place to be no matter who you are."

DOLLY SMITH: Ms. Smith, 49, has not yet come out to her family. She is a transgendered female and does not want her given male name used. All her friends know her as Dolly

"I don't go out dressed [in drag] in my neighbourhood … I'd probably get beaten up. People who ride the TTC sometimes give me unfriendly looks when I'm in drag. So, I change into my drag clothes in the Village, and there, I feel welcome."

"[The Village] let me feel completely comfortable with myself sexually. It gave me success in business and a lot of good friends and acquaintances... It offers a sense of belonging which is, for a lot of people, hard to find, especially in smaller towns, smaller cities, smaller communities. At one time, it was a mecca for gay people across North America because there was no acceptance in smaller places."

Politicians come together to march in Toronto Pride Parade
June 30, 2013 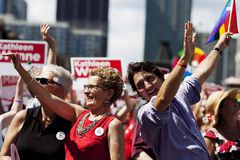 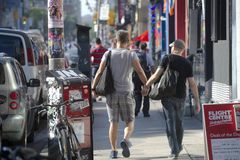 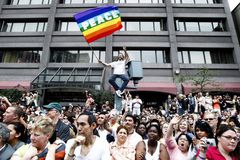