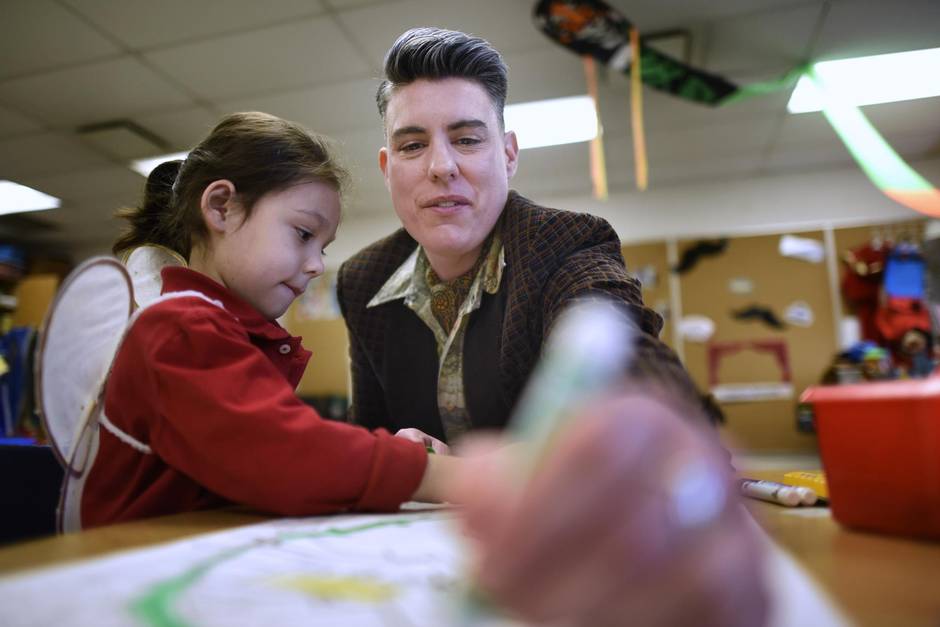 Key Straughan, a kindergarten teacher, was zipping up a student’s jacket recently when the little boy leaned in, touched his face and asked: “Where’s your beard?”

“I don’t think it’s going to grow back,” the four-year-old said innocently.

Another student drifted over and traced a beard over the teacher’s face with her hand: “I’ve given you a beard – you have a magic beard.”

“Can you see it?” Mr. Straughan asked.

“Yes,” the second student said, “it’s always been there.”

The young student was inadvertently profound. Until this school year, Mr. Straughan was known as Ms. Straughan. He is one of a few transgender teachers to come into the classroom, and in doing so has challenged young developing minds – and a few adults – about gender labels and inclusiveness at the Hamilton-Wentworth District School Board.

It has not been an easy lesson to teach. The strain reached a tipping point over the winter, and Mr. Straughan had to take a week off work to cope with stress and anxiety before returning to his classroom.

“I don’t think they even know they’re supporting me,” he said of his kindergarteners. “They just say these adorable things.”

On a rainy morning in late March, Mr. Straughan, 43, was wearing jeans and a dark velvet jacket, his broad shirt collars resting outside his lapel. His hair was shaped into a perfectly coiffed pompadour, a shade of blue that blends into platinum. He commanded a firm hold of his 23 overly excited and at times distracted students at Queen Mary Elementary School in Hamilton, located in a challenged pocket of this blue-collar city. But he was playful, colouring with one girl and later leading a costume parade down the school hallway, with children in tow dressed as tigers, ninjas, ladybugs and princesses.

But he moved around his classroom with ease, praising his students on their artwork, mediating arguments and helping dress children at the costume centre.

A four-year-old boy who called himself Rohunzel, his take on the character Rapunzel, twirled around the room in a flowing gown and hair made of long strands of paper that kissed the ground. 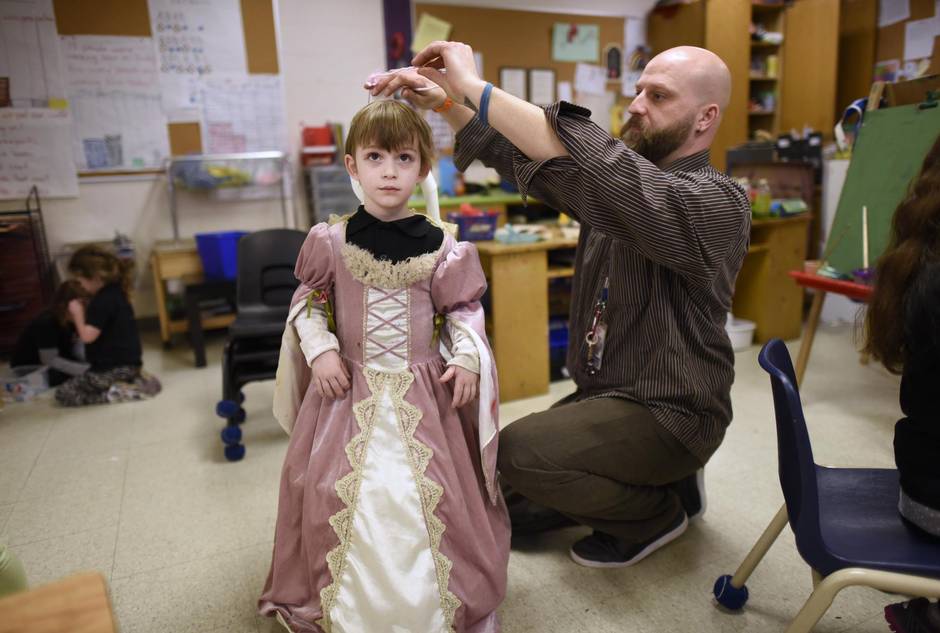 Mr. Straughan encouraged his students to try costumes over their school uniforms, to explore different characters and genders. He has enjoyed the play-based learning of kindergarten. He said he feels that he belongs – and where he believes he can have the biggest impact. It wouldn’t be out of ordinary to find Mr. Straughan’s teaching partner, Tyler Robertson-Roper, an early childhood education worker, wearing a skirt. “We have the ability, as kindergarten teachers … to just expose them to something else and to ask them why. Why can only a boy do that or why does a girl do that?” said Mr. Robertson-Roper. “I grew up being taught that there’s no such thing as boy things and girl things. That was my household. I bring that to my teaching and to my parenting.”

Kindergarteners don’t feel as threatened to play with gender roles, as long as they’re having fun, Mr. Straughan said. Allowing for that creativity, he said, is the only way young children can truly be comfortable in their bodies, and succeed in their studies. Mr. Straughan’s teachings to four- and five-year-olds also draw on lessons from his own life. He emphasizes supportive social environments and encouraging students to be accepting – key ingredients in Ontario’s new, and controversial, health and physical education curriculum.

He speaks from experience.

Mr. Straughan grew up in a small town in Ontario. He did not want to disclose the exact location because his family still lives there and they are still adjusting to him identifying as transgender.

He described himself as an “unusual” child. He didn’t see himself as one of the girls in kindergarten and preferred to play with the boys. Over the years, with so little information circulating on being transgender, he felt isolated. “I was just a very eccentric straight girl, but I didn’t identify as a girl. There were no words for it. I just knew I was different.” 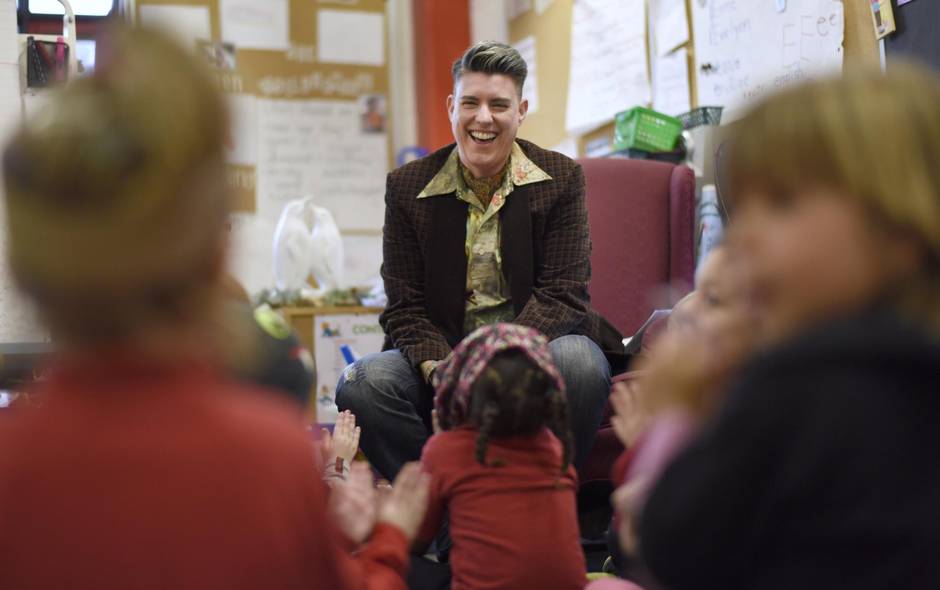 The 2015-16 school year was a significant milestone for teacher Key Straughan: It was the first year he chose to be identified as Mr. Straughan instead of Ms. (Fred Lum/The Globe and Mail)

Mr. Straughan was bullied, dropped out of school and moved to a bigger city. He eventually moved back home and completed high school, knowing that if he “behaved,” his parents would pay for university. “I worked really hard to be a lady, basically, because I wanted to go to university,” he said. He attended Concordia University in Montreal, and taught in the city for 15 years before moving back to Ontario to be closer to his family.

Mr. Straughan has taught for six years in Hamilton. He moved to Queen Mary last fall after his previous school was shuttered. He saw the change in location as an opportunity for a new beginning: Mr. Straughan, whose biological sex at birth was female, now identifies as male.

“I feel like I’m recovering my childhood,” he said of teaching kindergarten. “I feel like I get to have a lot of experiences I didn’t get when I was a kid.”

While a school is not the easiest place to transition, the head of the Canadian Teachers’ Federation believes it may be ideal because it challenges students and their families to think differently.

“Transgender teachers can draw from their own experiences with respect to dealing with their students’ emotional and social needs because of their own lived experiences,” said president Heather Smith. “Teachers can be powerful role models in displaying an inclusive, respectful and caring approach in the classroom. We have much to learn from them.”

Being transgender has forced Mr. Straughan – at times hesitantly – to speak up about gender identity. He said he’s troubled by his school board’s lack of training for all elementary school teachers on transgender issues. Teachers are trained in how to help newcomers or children with autism, but not children who identify as transgender.

The school board contends that there is training for those who are interested. “I would say that, much like other areas, it’s one of those areas that we constantly need to go back and revisit,” said Sharon Stephanian, superintendent of leadership and learning at the Hamilton school board.

Walking the hallways at Queen Mary has been difficult for Mr. Straughan. Pre-teens might ask him an innocuous question about his hair, only to have that question lead to something more obnoxious, bordering on mean-spirited heckling: Are you a boy or a girl? Why does your voice sound like that? 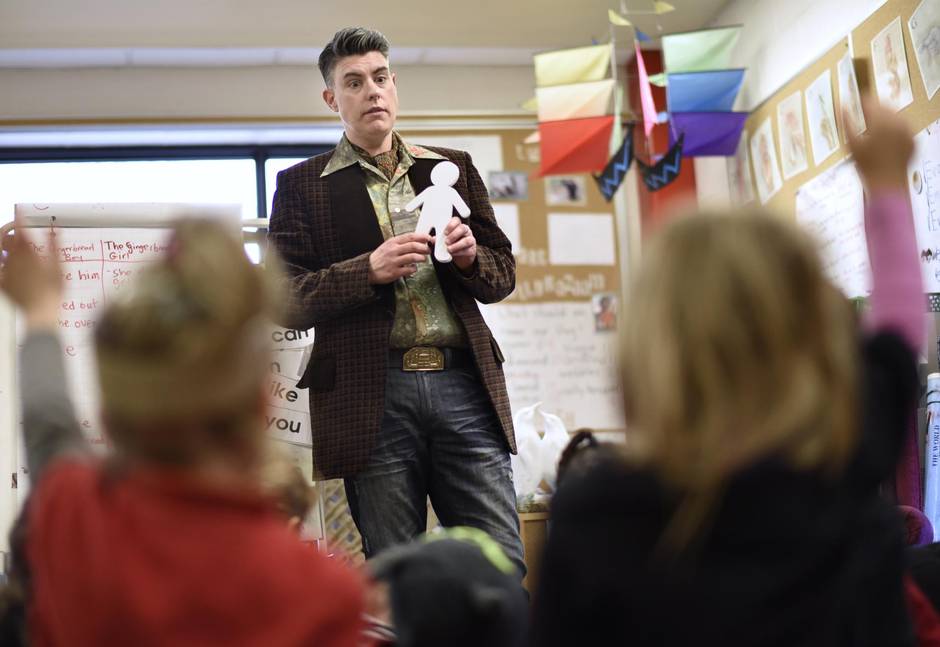 “I feel like I’m recovering my childhood,” Mr. Straughan said of teaching kindergarten. “I feel like I get to have a lot of experiences I didn’t get when I was a kid.” (Fred Lum/The Globe and Mail)

Mentally, he said, it can be exhausting. Mr. Straughan recently had to take a week off of work to recover. School administrators now deal with any issues that arise.

“If kids think they can do that to me, a teacher, and they know there’s going to be some sort of repercussions and they are still doing it, I can only imagine what’s happening to trans kids or gender-creative kids or just a kid who is a boy and is slightly feminine,” he said.

“If they’ll do it to me, it must be unspeakable to be a trans kid in the board.”

The parents of his students, he said, generally have been supportive.

On a Wednesday morning, children sat on the carpet and faced Mr. Straughan for story-time. It was a story he wrote titled, “The Gingerbread Person” – a slight variation on the more familiar tale and an idea sparked by Mr. Robertson-Roper.

In the story, the gingerbread person is running away from the grandparents, the cow, the pig and the horse, all of whom see him as a boy and want to eat him.

“I’ll run, run, run as fast as I can go. There’s more to me than you can ever know!” Mr. Straughan reads.