If someone held a contest to pick the lowest form of life in this city, the driver who blows past the open doors of a stopped streetcar would deserve to win hands down.

When a streetcar stops and the doors open, cars and bicycles are supposed to stop dead to let people get on and off in safety. It is an offence under the Ontario Highway Traffic Act to pass a streetcar stopped for customers. Vehicles must halt at least two metres behind the doors.

The reason is obvious. Fragile human beings are about to cross the right lane of the road.

Yet an astonishing number of drivers simply sail past those open doors. Some, taking the opportunity to get around the streetcar that has been slowing their progress, step on the gas and pass by like stock-car racers.

Cyclists are just as guilty, if not more so. When a streetcar slows as it approaches a stop, many speed up to get by and avoid the effort of coming to a halt and starting up again. Often they don't make it – and whiz through a crowd of people.

It's inevitable pedestrians will be struck. The Toronto Transit Commission reports that from Jan. 1, 2014, to Sept. 30, 2016, 26 people were hit by an automobile or bicycle while boarding or exiting a streetcar. (The TTC doesn't know how serious the injuries were.)

Most of those who slip by a stopped streetcar simply get away with it. All the average streetcar operator will do is ring the bell or honk the horn at them – or, more rarely, tell them off when pulling alongside. The operator has the option of writing down a car's licence plate number and passing it on for the police, but that's hard when the offending vehicle is speeding past and there is a streetcar to run. So the drive-by dodger suffers no consequence at all.

A proposal being studied by the TTC would attempt to change that. The commission is looking into equipping its streetcars with cameras to catch the dodgers. The idea is long overdue. It's impractical to expect police to prosecute dodgers. The cops usually aren't on the scene, and even if a drive-by is reported to them, the dodger is long gone in most cases. Camera images would allow police to pursue these miserable sneaks after the fact. Prosecutions would deter those who are tempted to book it as the streetcar doors open.

Some will call the camera idea an invasion of privacy, another example of the spread of the surveillance society. That seems a bit of a stretch. The cameras would be there for the sole purpose of catching drive-bys, not snooping on the public. There are ways to make sure the footage isn't used for an unintended purpose.

Others will say the idea just underlines how silly it is to have streetcars trundling along city roads. Many North American cities did away with them decades ago and brought in buses, which have the virtue of being able to pull up to the curb so people don't have to cross a lane of road to reach them. Even cities that still have streetcars usually run them on separated rights of way with islands or platforms for boarding. Toronto is unusual in having many of its streetcars running in mixed traffic, on busy streets such as King and Queen that are generally too narrow to allow for boarding islands.

But hundreds of thousands of commuters rely on those streetcar lines. Replacing them with hordes of belching buses is no solution. Far better to make rogue drivers and cyclists behave like responsible citizens and watch what they are doing when they approach a streetcar.

The new streetcars have flashing lights on the doors and on the back to let drivers know when the doors are opening. That may help when the new vehicles, currently used on lines with their own rights of way, enter mixed traffic. Even then, it seems likely that some drivers will continue to put lives at risk by dashing past when the doors open.

Unfortunately, tarring and feathering is no longer practised. In its absence, using a camera to record and punish their recklessness seems the very least we should do. 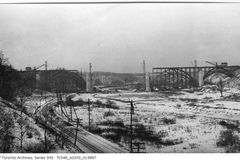 Toronto transit: How to make ‘the better way’ the viable alternative way
December 2, 2016
Toronto voters will pass judgment on road tolls, Mayor Tory says
December 6, 2016
Follow Marcus Gee on Twitter @marcusbgee
Report an error Editorial code of conduct
Due to technical reasons, we have temporarily removed commenting from our articles. We hope to have this fixed soon. Thank you for your patience. If you are looking to give feedback on our new site, please send it along to feedback@globeandmail.com. If you want to write a letter to the editor, please forward to letters@globeandmail.com.
Comments