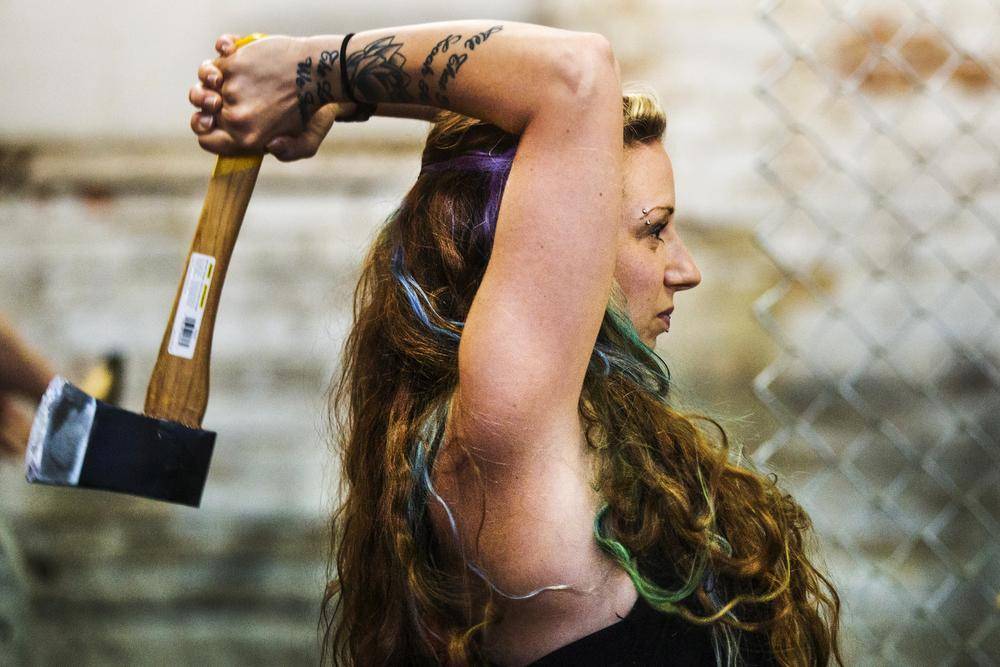 'It’s easier than I thought it was going to be,' Niki Schiafone says about axe throwing. (Mark Blinch for The Globe and Mail)

Eyes on the target, the pressure is on as Niki Schiafone raises a 28-inch axe high over her head.

It’s the tie-breaker of her first game in Toronto’s axe throwing league, held in a Port Lands warehouse with multiple playing lanes caged in barbed wire. Her opponent has landed a blade just off the bull’s eye and Ms. Schiafone must stick hers right in the centre to win the match.

Her left foot planted on a concrete block on the floor, the petite, young woman lunges forward and hurls the axe at the painted wooden planks several feet away.

It bounces off the target and clatters to the floor.

“It’s easier than I thought it was going to be,” Ms. Schiafone says, in good spirits after losing. “It’s not horribly physically demanding, and it’s just really fun.” 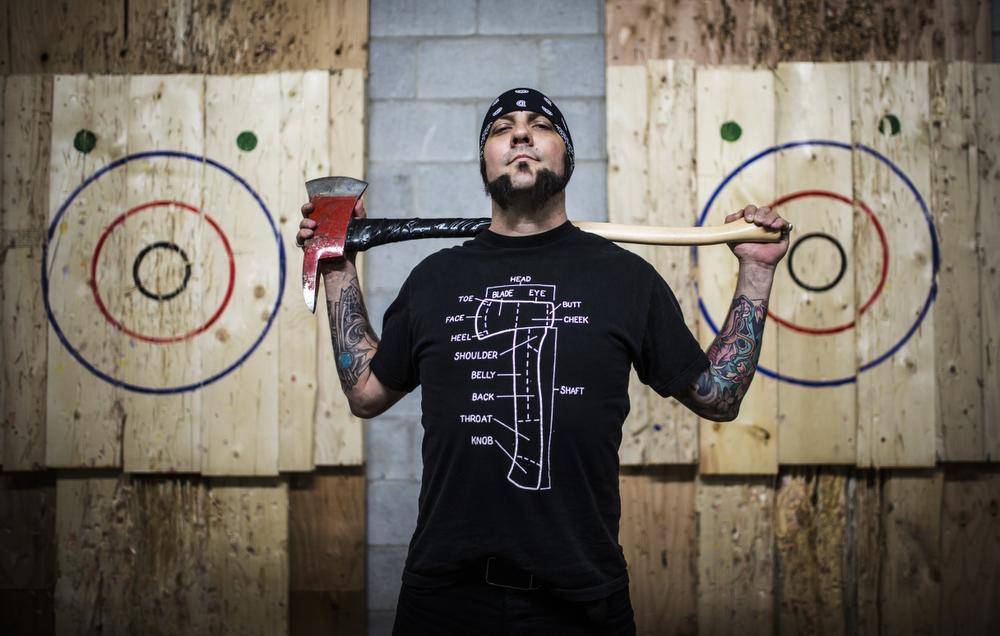 Matt Wilson is the co-founder of Toronto's the Backyard Axe Throwing League. (Mark Blinch for The Globe and Mail)

Instinctively, the Backyard Axe Throwing League (BATL) may seem an absurd, niche activity, but the large Villiers Street spot is the league’s second location offering a sport growing in popularity since it began in founder Matt Wilson’s backyard in 2007. Now, his company is struggling to accommodate more than 300 league players and 40 private events a week between just two locations.

An automated booking system set to launch this month will help reduce wait times, which are now reaching 12 weeks, and will keep BATL’s computer server from crashing as it receives more 100 e-mails a day, Mr. Wilson says.

He is also in talks with a corporate partner about expanding into at least three other locations in other cities in the next five years.

“It’s all far too early to say how it’s going to pan out but I said years ago that it could work in any city in the world,” Mr. Wilson says. 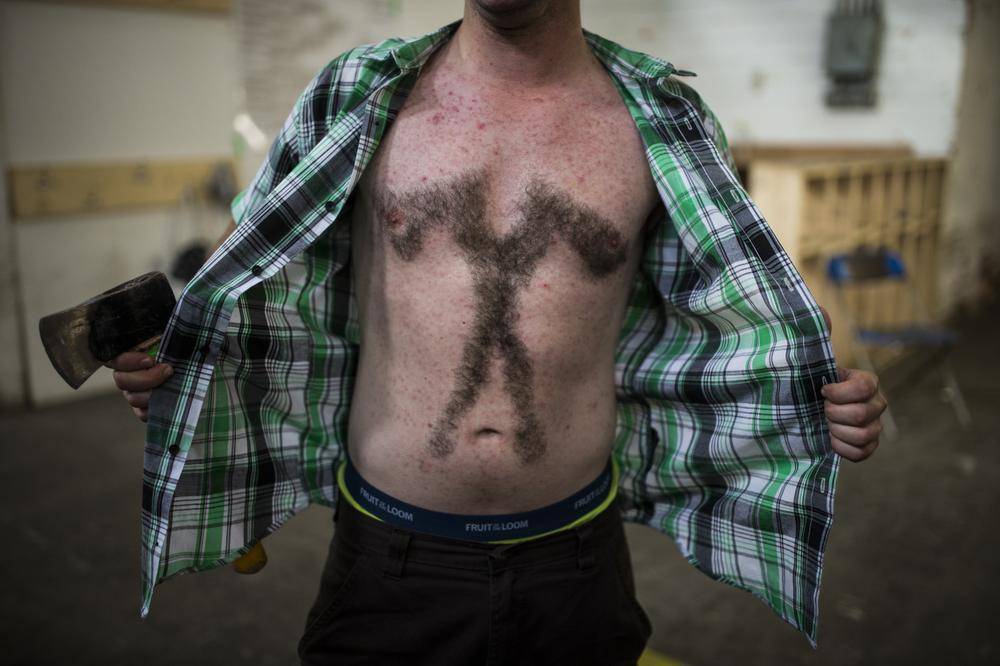 He started the league with about 12 men after trying out axe throwing at a friend’s cottage. A variation of the sport practised in Europe, Mr. Wilson’s version uses small, single-sided hatchets and a larger axe for breaking ties. Matches are played in sets, similar to tennis, for a lengthy game with little chance of winning by fluke.

The league soon outgrew Mr. Wilson’s backyard and, after struggling to find reasonable insurance (surprise – no one wanted to insure a league chucking around sharp axes), BATL moved into a west-end location in 2011 and eventually Villiers Street last December.

“We’ve had every kind of party come in through here,” he says, including a senior’s birthday party. “We had them throwing from wheelchairs.”

Though nearly all the employees are muscular, tattooed men sporting creative facial hair styles, the Monday night clientele seems fairly diverse. Ian Bobby, who joined the league five years ago and now works as a coach, says about 35 per cent of throwers are women. 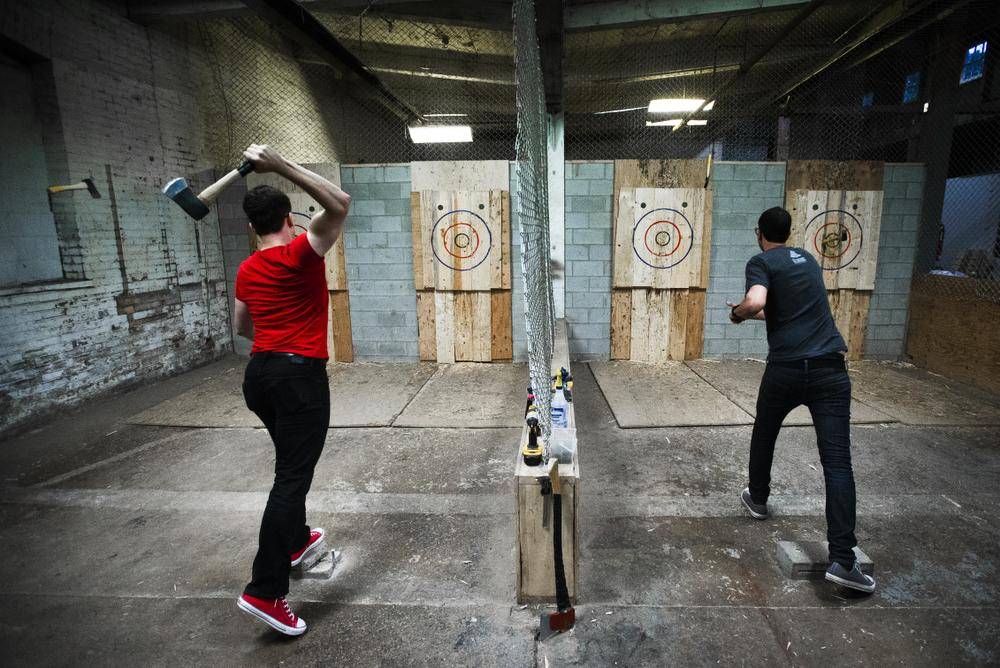 Members of the Backyard Axe Throwing League play a game. (Mark Blinch for the Globe and Mail)

“There’s a very primal level that this appeals to people,” he says, “the idea of throwing something that’s pretty much forbidden when we’re living in a culture where people tell you not to run with scissors.”

At BATL, players are trusted with carrying around their hatchets between turns and they’re even allowed to bring beer.

Mixing alcohol and axes could seem unwise, but League co-ordinator Trevor Welsh says it’s meant to encourage only casual drinking – abusers of the policy are quickly called out. “If you show up with a pack of 12 beers, it’s kind of frowned upon and we have no problem telling you that.”

Mr. Wilson adds: “[People] really enjoy the fact that they can do this and they choose to not be reckless and silly.”

He may be right. In its seven-year history, BATL has seen only three injuries, none of them fuelled by alcohol. Two were nicks from axes bouncing off the target or the floor and one was more serious, requiring four stitches, when an axe skipped across the floor injuring a woman in flip-flops, which are normally banned at BATL.

“As in any sport, there is a risk of injury,” Mr. Wilson says. “Considering we’ve had probably over 10,000 new throwers through this space in the last four months, we’re pretty proud of that track record.”