They're cheery, outgoing and they poke fun at each other as often as they can.

They are not a family in a traditional sense, but a family of volunteers, brought closer by the nature of their work. Where they help, death is a constant visitor.

The small 10-bed palliative care ward on the third floor of St. Michael's Hospital has an average stay of just nine days.

It is a privilege to be there as someone dies, says Mary Joy Sloan, who has been volunteering with the unit for almost 30 years.

She spends most of her four-hour shifts getting tea or coffee and cookies for family members, talking to people who want company, just listening when they need to unload and trying to coax a smile.

It is not easy work. The oldest patient they've had was 100, but the youngest was just 19.

As Canada's population ages, this type of volunteer is becoming more important. Most of the programs get at least half of their funding from private donations.

A federal program that funded end-of-life care was cut in 2007 and there has been no suggestion of a government strategy on a national palliative plan. The need is looming: More than 40 per cent of seniors are battling at least two chronic diseases, the kind of fights that often end in these care units, says the Canadian Hospice Palliative Care Association.

In Toronto, there are just 238 palliative beds and the Toronto Central Local Health Integration Network says that number will expand in the coming months when the Philip Aziz Hospice adds six beds at Emily's House, at Parliament and Gerrard.

The hallway at St. Michael's unit echoes with live music twice a week, thanks to the family of a former patient; each private room has its own flat-screen TV and a pull-out couch for a visiting member, thanks to donations; and instead of the sterile, white-walls people have come to associate with hospitals, these ones are adorned with artwork, also donated.

As heartbreaking as it can be, death here isn't scary – far from it.

Some patients have never been more full of life.

On more than one occasions, the volunteers have helped dress patients in tuxes with hospital blankets covering their legs and wheeled them down to the hospital's chapel to watch their sons and daughters be married.

"Sometimes I think palliative care, if properly understood and properly applied out there, could be catalyst to world peace," says volunteer John Carsone, a cancer survivor himself. He shakes his head as he talks about the patients who've been so thankful because here, for the first time, they felt loved.

"Why should someone have to wait until they are here to receive the respect and love they deserved all their lives?"

A little over a year ago Mr. Carsone met a "very, very young" man with his wife and three children. The man was dying, he says, and his wife just couldn't understand.

She and her husband went to mass every day, she told him, and their kids went to Catholic schools so "look at this, why did this happen?"

People want answers sometimes, Mr. Carsone says, where there are none to be had.

"I took her hand and I said, 'love, I have no answers to any of those questions, but what I can tell you is that all of us here are going to walk this journey with you.' "

This past Christmas was especially difficult for the volunteer team: Their champion holiday decorator became a patient and succumbed to a brain tumour.

"She was the kind of person that when she walked into the room she lit the place up," Ms. Sloan says. "She was amazing and we miss her." 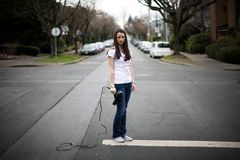 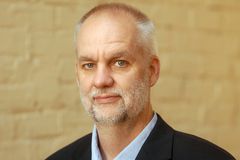 From the photographer: A delicate balance of respect and boundaries
March 17, 2012 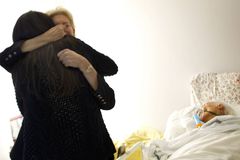 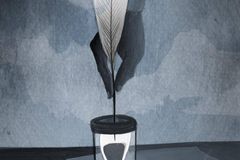