The 504 King streetcar is the busiest surface transit route in the country's biggest city and, as more than one city councillor said this week, "it's broken."

As with many Toronto streetcars, the 504 shares the road with cars. When traffic gets thick, it often slows quite literally to a walk. People walking alongside sometimes outstrip it.

As a city report concedes: "Streetcar service can be slow, unreliable and erratic, with unpredictable travel times, especially during rush hours, but also during some late evening and weekend times. People end up having to plan for their slowest trip."

That's an abysmal performance for a transportation route that runs through the heart of the financial district. Now – miracle of miracles – the city is proposing to do something about it. Officials want to experiment with closing off King Street to most car traffic between Bathurst and Jarvis, north-south streets that intersect King to the west and east of the downtown core. Without so many cars in the way, the streetcar should move much faster.

Why this modest and sensible step should be controversial in a modern city with a booming downtown and an overburdened transit system is a mystery. Yet it is. It was up for debate again this week at city council's executive committee, which approved the idea and sent it on to council for a vote next month.

Some critics says it will make driving a nightmare. Others says it will kill local business: People won't be able to park outside their favourite restaurant or drive to a show. One councillor, Denzil Minnan-Wong, said that some people in his suburban part of town tell him they don't even come downtown any more because the congestion is so bad. That sounded a lot like Yogi Berra's observation that, "No one goes there any more, it's too crowded."

Taxi companies are worried, too. They say they should be exempt from the limits on car traffic because cabs function as a form of public transit.

None of these objections holds water. Giving taxis a pass would make King a thoroughfare for cabs, defeating the purpose of the transit way. The last thing commuters getting on and off the King streetcar want is to have to dodge a horde of passing taxis.

The city will take out 180 curbside parking spots when it reconfigures King to favour streetcars, but, as a city report points out, that is just a fraction of the 7,800 parking spots within a five-minute walk. Those who want to come downtown and park their cars should be able to find a place somewhere. Few people really expect to park on the street right outside the King Street bar they are visiting, any more than people in New York expect to pull up right outside their destination on Fifth Avenue. Toronto is a big city. Downtown business don't count on drive-up customers.

Some drivers will be inconvenienced when the city bans through traffic, no doubt. Cars will be able to travel only one block at a time on King, turning right at the first intersection. That will allow for delivery trucks and taxis to visit and for vehicles to reach local garages or driveways, but it will effectively close off the central part of King as a means of car travel across downtown.

That's hardly the end of the world. Traffic experts say parallel streets, including Queen, Richmond, Adelaide, Wellington and Front, can take up the slack. In any case, 65,000 streetcar riders a day use King, compared with 20,000 vehicles. Mayor John Tory argues that it might be different if the two groups were roughly tied, but it's not even close. Transit riders far outnumber drivers. It's only fair to give them priority.

Mr. Tory says the city has tried all sorts of things to make the King car move better: introducing all-door boarding on streetcars to get people on and off faster; limiting left turns by cars that stall the streetcars behind; upgrading traffic signals. It still trundles along at a stately pace. It is time to do something bolder. "In a 21st-century city," he told the executive committee, "we simply have to be prepared to try things to move us off the status quo."

He is surely right about that. The status quo favours the car, which has ruled the roost for decades in North American cities. Ever so gradually, that is changing. Toronto is getting more bike lanes to make cycling safer, more crossing signals and better lighting to protect pedestrians. Now, finally, it is getting a transit corridor on its busiest streetcar route. That shouldn't be controversial in the least. It should have happened years ago.

Toronto pilot project looks to make King Street rapid transit live up to its name
May 12, 2017 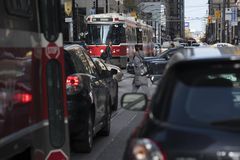 Toronto’s downtown relief line: The fable now needs its own reality show
May 26, 2017
Metrolinx strikes light-rail deal with Alstom, bypassing Bombardier
May 11, 2017
Follow Marcus Gee on Twitter @marcusbgee
Report an error Editorial code of conduct
Due to technical reasons, we have temporarily removed commenting from our articles. We hope to have this fixed soon. Thank you for your patience. If you are looking to give feedback on our new site, please send it along to feedback@globeandmail.com. If you want to write a letter to the editor, please forward to letters@globeandmail.com.
Comments