When Mayor Rob Ford said that he was giving up on his Cut the Waist campaign, many people sympathized.

"Anyone who has been on a diet knows how hard it is to lose weight," said Don Valley East Councillor Denzil Minnan-Wong, a member of the mayor's executive committee. "He tried as much as he could and he obviously hit a plateau and he decided to stop. But he made the try and he raised the issue of trying to be healthy and trying to lose weight and he should be given some level of credit for that."

Fair enough. Losing weight can indeed be a struggle and many fall off the wagon far short of their goal. Mr. Ford was brave to make the attempt in public, subjecting himself to a weekly weigh-in outside his office as cameras rolled and clicked. All the same, the way he has conducted the campaign says something troubling about the way he handles his job.

Mr. Ford launched his campaign with fanfare on Jan. 16. With former mayoral candidate John Tory presiding, he and his brother Doug weighed themselves on a giant scale outside the mayor's office. Each said he planned to lose 50 pounds by June 18 – in six months time. Doug weighed in at 275 and Rob at 330, "the heaviest I've ever been."

The brothers invited others to join them in the struggle to shed pounds. "Join!!! Mayor Ford's Cut the Waist Challenge!" said a banner at the event. They set up a web site asking followers to show their support by contributing to a charity of their choice. They began what was to be a series of weekend walkabouts and asked the public to come along. Mayor Ford was shown jogging in sweats around an outdoor track and quoted as saying he was eating "like a rabbit."

But, like many of the mayor's drives, the Cut the Waist campaign was a haphazard affair that soon ran out of steam. The walkabouts petered out. The weigh-ins, originally weekly, became fewer and farther between. He cancelled five in the past nine weeks.

After losing 22 pounds in his first month, the mayor started gaining again. A YouTube video caught him going into a KFC joint. By his last weigh-in on May 8, he was back up to 314 pounds.

He was obviously frustrated, and fraternal rivalry may have played a part. Doug has had more success at shedding poundage, reaching 247 by the last weigh in. Rob does not seem thrilled by that. It was Doug's joking threat to drag him to this week's weigh-in – which never happened in the end – that brought on Rob's outburst about quitting.

On his radio show on Sunday, he said he was throwing in the moist towelette. "I don't care about the weigh-in," he announced. "I'm not even dieting any more. It's gone. It's water under the bridge."

It was a odd way to end such a high-profile effort. What does it say to all the struggling, overweight people he asked to follow his example?

On Monday, on Mr. Tory's radio show, he muddied the waters by saying he was not really quitting after all. He would keep trying and would show up for a final weigh-in on June 18, but would cancel the public weigh-ins in the meantime. Those events, he said, had turned into a "circus." Reporters hung around like "piranhas" to ask him questions – no surprise, given the weigh-in was one of the few occasions he was available. "He just feels under major pressure," Doug explained.

Maybe, but the pressure was self-imposed. It was not the media that put a scale outside his office. The decision to do it all in public was his.

Now the whole thing is ending in shambles. It is sadly typical of the mayor's M.O. He announces an ambitious goal under a flashy slogan and swears to see it through come hell or high water. But he doesn't think it through. His unfocused, drive-by approach to decision-making has landed him in hot water from the Port Lands to the transit issue.

Whether you are planning to build a subway to Scarborough or to lose 50 pounds, you need more than a banner with an exclamation point. You need a plan. 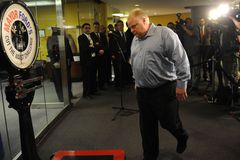 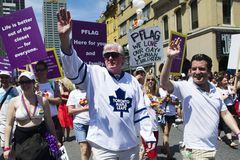