Michael Cipollo declared once and for all that he was done with Toronto – its $25-a-day parking, brutal traffic, high prices, miserable people and the money-rules corporate restaurant scene. Although he spent 15 years as executive chef of the Bier Markt (growing it from one location to eight), he didn't hesitate to sell his house, pack up his family and move to a booming Hamilton where he's already launched two successful eateries – with at least three more in the works.

"I was tired of restaurants dominated by financial spreadsheets," he says. "My own values weren't a fit for the corporate restaurant world any more. So I was wondering, 'What's next? Go out on my own?' The costs of doing that in Toronto are staggering for those who don't have angel investors dumping millions into a project. So opening up restaurants for little guys makes sense in Hamilton."

Mr. Cipollo and wife Paula dipped their toe into Hamilton's culinary scene in October 2015 with Hambrgr. In four weeks, they launched the gourmet, vowel-challenged burger joint downtown on King William Street. It was a leap of faith on multiple counts – a chance to be part of the city's evolution and to bring life to a lifeless downtown street with only a bingo hall and a couple of restaurants drawing visitors.

"Oh my God, I thought. There's no one here. This place is abandoned," Mr. Cipollo recalls about those early days.

But Hambrgr's hefty creations, made with locally raised beef, and craft-beer offerings drew a crowd. Within four months, he bought the space next door and opened Fsh & Chp. In their first year, sales from his two businesses doubled, confirming what he suspected all along: There are oodles of opportunities in Hamilton to create successful restaurants. Next up, he's opening a bigger version of Hambrgr in January on Ottawa Street, going from a current total of 41 seats (including patio) to 110 seats over two floors.

"At first, people from Toronto thought I was crazy to open up a place in Hamilton," he says. "It has just as many cool, hip enjoyable places to go than any neighbourhood in Toronto with a lot less pretension. When I left, I'm sure it was, 'Ha-ha-ha. He'll fall flat on his face.' Now, people are asking when they can get involved."

Mr. Cipollo is just one of a slew of chefs and restaurateurs leaving Toronto for Hamilton in hopes of a better work-life balance, more affordable housing and room to grow. And what they are discovering is a city with plenty of ground-floor opportunities.

Top Chef Canada alumni Vittorio Colacitti leads a double life, splitting his time between the 416 and 905 area codes with restaurants in both. After establishing the Good Son on Queen West, he realized he still wanted to be in Hamilton, where he was pondering locating a restaurant five years prior. At that time, he felt neither he nor the city was ready for the kind of restaurant he had in mind.

That quickly changed when he came to eat in Hamilton and saw the emerging strength of the food scene. "It was seeing other awesome restaurants opening up, like Aberdeen Tavern, that showed me that people would travel for high-quality food, service and ambience. Once I visited, I realized obviously there was a demand."

And for Mr. Colacitti, launching a restaurant in Hamilton is a kind of homecoming. He and his family have deep roots in the area with his great-grandparents arriving in 1895. "I had other opportunities to do other projects in Toronto, but Hamilton is more my vibe," he says. "I like the pace. I like the people and their genuineness. This is where I feel comfortable."

In July, 2016, Mr. Colacitti welcomed the first customers to Born and Raised, a restaurant focused on fresh, local and seasonal ingredients with an Italian flair. Located on James Street North, it was a good fit in a thriving neighbourhood known for its art crawls, gallery spaces, unique boutiques and diverse mix of places to eat.

Along with mains such as handmade pasta, Sicilian octopus and Nonna's meatballs, his restaurant also features a raw bar, small plates and phenomenal thin-crust pizzas. "You can't plunk a Toronto concept into Hamilton," he explains. "That's not it. It's just about giving Hamilton another great place to dine."

Jerrett Young, owner of BluePrint Hospitality, had no connection to Hamilton before he joined forces with restaurateur Jason Cassis, an early player in Hamilton's fine-dining scene who created Aberdeen Tavern. They are the duo behind the French, a modern take on a French bistro that recently opened in a historic 1854 building on King William Street.

He worked with Oliver & Bonacini up until two years ago when he left to started his company, which guides smaller restaurants from conception to launch and daily operations.

"At O&B, Hamilton was never on the radar," he says. "Instead, we talked about doing restaurants in Oakville or Burlington. But in the last three years, there has been this huge spotlight on Hamilton. There's something very compelling about it. There a lot of diversity and developers are paying close attention to what kinds of restaurants come into the city."

It's tough to get small restaurants to open in downtown Toronto because of the sheer expense of key items like design and rent. "You just don't have those barriers in Hamilton," Mr. Young says. "The food and labour costs may be similar, but you can find amazing buildings with tons of character and more manageable rents. That's why a lot of chefs and people in this industry are looking to come here."

But he cautions that Hamilton isn't Toronto: "What's difficult for people making the leap from Toronto to Hamilton is that restaurants here aren't multimillion-dollar projects. Everything is pared down. Expectations need to be readjusted in terms of volumes and the number of staff you can hire from a smaller talent pool."

Mr. Young and Mr. Cassis hired two top talents from Canoe for the French. John Forcier (former sous chef) heads up the kitchen, while Cory Tower transfers over his general manager skills. This wasn't a case of poaching or luring them away from one of Toronto's restaurants. Both were ready to leave.

Mr. Forcier was fed up with his three-hour commute downtown from Georgetown. Now, he's whittled down his ride time to just 25 minutes each way. He has no regrets going from Canoe with its 20-year history to one just getting off the ground. "I've been blown away by the food scene. The more I'm in Hamilton, the more I can see that it makes sense for me to be here. There's so much happening right now."

He sees the fact that the French isn't in the GTA as a good thing. "I feel like when you open a place in Toronto, 10 food critics jump on you right away while you're still figuring things out. … Hamilton gives you more a chance to develop more organically."

While Mr. Forcier will remain living in Georgetown, Mr. Young is eyeing a move to Hamilton next year. He is working with just one restaurant in Toronto, while he has multiple projects in the 905. He has joined the ranks of many new cheerleaders for the city's food scene.

"There is a lot of room for great chefs and restaurants," he says. "It hasn't peaked yet. Not even close."

Where to go north of Toronto for your Chinese food fix
December 23, 2016 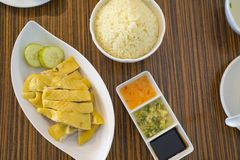 Toronto food delivery services suffer from overabundance
December 9, 2016
Toronto's Country Style Hungarian reopens doors with traditional menu intact
November 18, 2016
Follow us on Twitter @globeandmail Opens in a new window
Report an error Editorial code of conduct
Due to technical reasons, we have temporarily removed commenting from our articles. We hope to have this fixed soon. Thank you for your patience. If you are looking to give feedback on our new site, please send it along to feedback@globeandmail.com. If you want to write a letter to the editor, please forward to letters@globeandmail.com.
Comments