Despite the drug scandal and ongoing police investigation, Rob Ford was arguably the top performer in the first mayoral debate of Toronto's municipal election campaign.

Mr. Ford stuck to his talking points as his leading opponents – Olivia Chow, John Tory, Karen Stintz and David Soknacki – fought to avoid getting lost in the cacophony during Wednesday's televised match-up.

Here's why Mr. Ford's challengers have their work cut out for them:

Ford stuck to his message

"Where Rob Ford performs well is he has this ability to bring everything back to very short, very simple lines that he repeats over and over. Some of the claims against him are that they're inaccurate, but he has a very skillful way of deflecting the allegations that he's misstating his accomplishments," he said. "It starts to stick. It's easy to understand."

And as the incumbent who faces other candidates' attacks, Mr. Ford benefited from extra time to respond, said Myer Siemiatycki, a municipal politics expert at Ryerson University.

"I thought that it, in some ways, was harder for the four to distinguish themselves from each other in the context of … the outlier Rob Ford being a more distinctive presence and stance and getting a fair amount of air time," he said.

How Ford's opponents can succeed

The four other main candidates would benefit from analyzing the mayor's performance to "get a better sense of how to counter-challenge Rob Ford," Prof. Siemiatycki said.

"I think the piece that will change the least between now and voting day is the message from Rob Ford," he said.

The challengers also have an opportunity to impress voters by providing detailed policies on a host of important issues, said André Côté, manager of programs and research at the Institute on Municipal Finance and Governance at U of T's Munk School of Global Affairs.

"I think as some of the candidates start to put the first sort of shreds of meat on the policy bones … there's going to be a little more pressure on the other candidates to match them in terms of coming out with their ideas and I think that's a great thing."

None of the challengers brought up Mr. Ford's admission that he had smoked crack cocaine or the ongoing police investigation, clearly hoping to stay above the fray in the early days. But municipal observers expect they will eventually go negative.

"This was sort of the elephant in the room, this was the biggest issue that Toronto's been dealing with," Mr. Crean said. "I suggest that it won't be ignored for the whole campaign."

Ms. Chow came out strongest among Mr. Ford's challengers, standing out "as the person who was the clearest alternative to Mayor Ford," Prof. Siemiatycki said.

Still, Mr. Crean said she faces a huge challenge in defending accusations that she is a tax-and-spend NDP candidate.

"I think she was relatively scrappy, which I think this campaign will eventually prove to be quite scrappy. That's probably where one needs to go in terms of dealing with a personality like Rob Ford," he said.

Despite being polished and articulate, Mr. Tory left himself open to criticism by not discussing specific policies when pressed by Ms. Stintz, Mr. Crean said.

"I think that hurt him," he said. "He had a bit of a deer-in-the-headlight look when he failed to answer it as asked and she called him on it."

Prof. Siemiatycki said Mr. Tory wasn't as focused. "You got the impression the words strung along quite nicely but you kind of were wondering yeah, but where's this all going and what does this mean and what can this person actually deliver?"

Stintz 'lost in the mix'

As a centre-right candidate who is a former ally of the mayor, Ms. Stintz has an uphill struggle to stand out, observers said.

"She's almost squeezed on all sides," Prof. Siemiatycki said. "She has a tendency to sort of get lost in the mix."

Ms. Stintz has emphasized she is a working mother with a mortgage to pay, but needs to raise her profile, Mr. Crean said.

"She's begun that story. Did it break through? Did you hear it loud and clear? I guess time will tell but I think that she needs to stick to that story and get it out more strongly," Mr. Crean said.

Unlike the other leading candidates, Mr. Soknacki needs to discover his "brand" and promote his story in order to get noticed in the crowded field, Mr. Crean said.

"The Soknacki brand, to me, no one knew what it was. His name recognition and awareness of what he stands for and what kind of person he is is relatively unknown to the general population," Mr. Crean said.

"He was unable to establish really anything other than a capable bureaucrat, but not necessarily having the enthusiasm, excitement and vision to be mayor."

Four reasons Rob Ford had a good debate
March 27, 2014
Nary a peep on drug scandal as Toronto mayoral candidates face off on TV
March 26, 2014 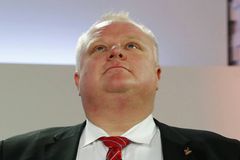 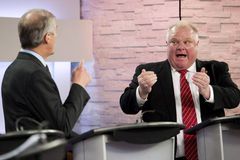 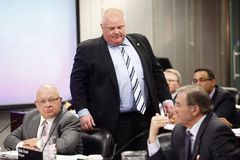