On a hot morning in August, Veer Gill, 7, and two friends are sprawled on the grass at their school playground, drawing leaves of varying sizes on plain white paper. It’s part of their lesson in math – a subject most kids would dare not consider during the final weeks of summer vacation.

Good thing, then, that Veer and his friends are not on holiday.

They are among the 790 children attending Roberta Bondar Public School in Brampton, as part of an educational concept slowly gaining traction across North America. About 100 public schools in Canada have adopted year-round classes, which means students have a shorter summer break but more holidays dispersed throughout the year.

The children at Roberta Bondar have the same number of instructional days as those attending school with a traditional calendar. The hope is that if kids are away from school for shorter periods, they will retain more of what they’ve learned and, therefore, do better academically. 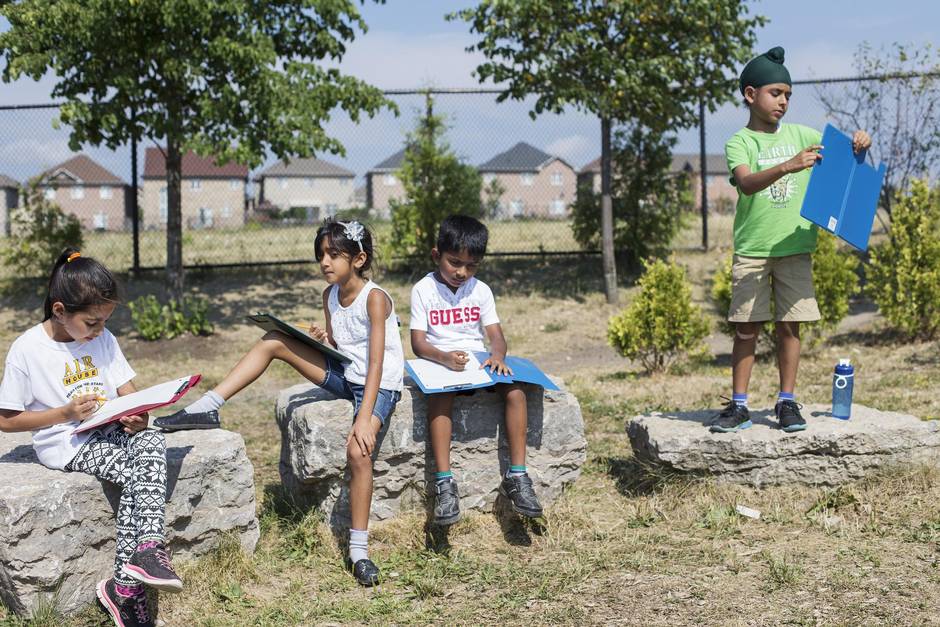 Not everyone is eager to sign on. The research is mixed as to whether an alternative timetable helps or hinders the academic performance of kids, and there is intense debate among educators and parents over how much time kids should spend in the classroom and how much they should spend free of teachers and homework.

Veer is convinced that a month off in the summer is all he needs. He spent it taking trips to the beach and to Centre Island in Toronto. He admits to being a “little bored” at home.

“You play here, and soccer is my favourite. I like doing math and exploring. That’s fun,” he says. Veer goes so far as to pity kids in other schools: “I think they’re going to forget everything that they learned.”

His suburban school is lively as kids return the first week in August. New backpacks hang on hooks that line the hallways. Children stream in and out of classrooms, running out to play at recess and at lunch. Teachers launch right into lessons, teaching fractions and English.

It may be a humid summer day, but the school is air-conditioned – a must for a year-round learning.

Joan Hamilton, the former principal, spearheaded the Roberta Bondar initiative when the school opened its doors more than a decade ago. She believed kids struggling with their schoolwork – and those who were English-as-a-second language learners – would benefit from shorter but more frequent breaks. (Roughly 90 per cent of the students at the school are English-as-second-language learners.)

Many schools in the United States, Germany and Australia have put year-round schooling front and centre. Here in Canada, public schools in Alberta, British Columbia and Ontario have also rejigged their school calendars. Roberta Bondar closes for four weeks in the summer, as opposed to two months for schools on the traditional calendar. But staff and students get three weeks off instead of two at Christmas, two weeks off for March break, a two-week break in October and a week off in February. 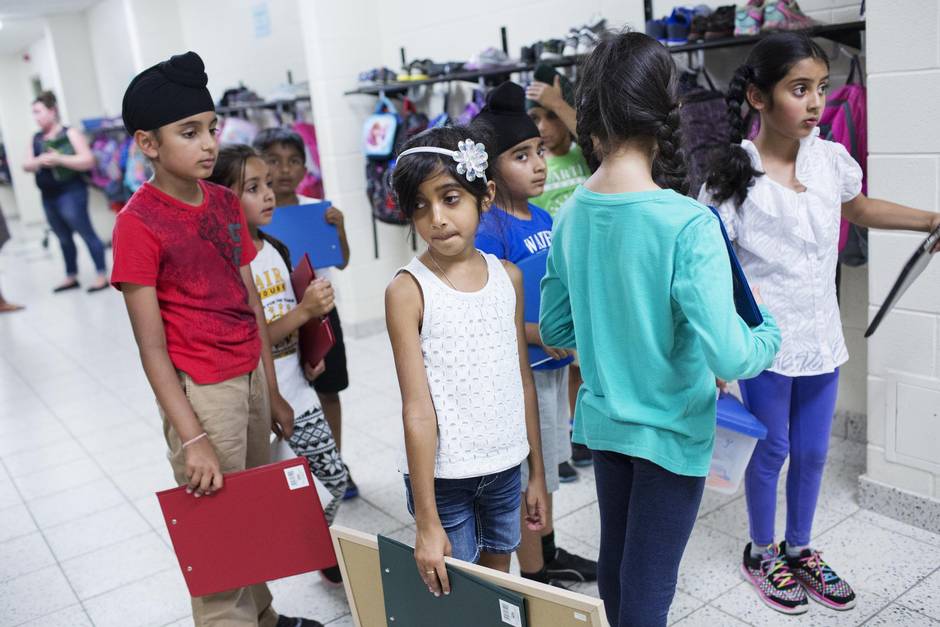 Students have already begun their classes in the air-conditioned building – a must for year-round schooling. (Michelle Siu/The Globe and Mail)

Advocates say the nine-week summer gap negatively affects students’ achievement, especially for those from low-income households who tend not to have the same enrichment opportunities as their peers. They are more likely watching television at home than enrolled in summer camps or learning to kayak at the cottage.

But for every parent at Roberta Bondar who is happy to change up the school calendar to keep kids engaged in their lessons, there are parents who say that a shrinking summer vacation robs children of a different kind of learning experience – one that includes outdoor play.

Meagan Austin, a mother of two children, says the long summer break gives her kids a chance to “turn off.” Ms. Austin, who lives in Moncton, N.B., is enjoying the last weeks of summer vacation at the family cottage in Nova Scotia.

“They are in their summer mode,” she says – her children are playing outdoors, being creative and exploring. “There is so much more to life and learning than just being in a classroom.”

Many teachers also like the idea of a long summer vacation after 10 months of intensive teaching and marking countless papers.

“I’m not sure that, for many teachers, two months is a long time,” says Heather Smith, president of the Canadian Teachers’ Federation. “It always took me at least a month just to unwind and then get … refreshed and rejuvenated for the next year.”

Carolyn Shields, a professor of educational leadership at Wayne State University in Detroit, does not buy into the argument that a long break is necessary. “Children certainly do need to play, but it should happen all the time and not just two months in the summer.”

In a year-round calendar, kids will still be able to enjoy trips to the zoo or to Disneyland but, at the same time, less-advantaged kids don’t suffer any learning loss. “If we believe that all children are our children in a democracy, we should be concerned about those with the least advantages,” Prof. Shields says.

As for those learning gains that come with a shorter summer break, the research is positive, but not definitive. Studies show that learning for all students slides in the summer, but disadvantaged students regress more than average. The effect of year-round schooling, however, has been fairly minor. Some observers say that it could be because year-round schooling has the same number of school days as the regular calendar.

A few years ago, when Peel District School Board compared the Grade 6 academic results of Roberta Bondar students to a school with a similar population on the traditional calendar, officials found no difference in marks. In the end, says Poleen Grewal, superintendent of curriculum and instruction at the school board, families at Roberta Bondar like the shortened breaks. It’s enticing given that many working parents struggle to schedule two months of camps and vacations for children out of school. 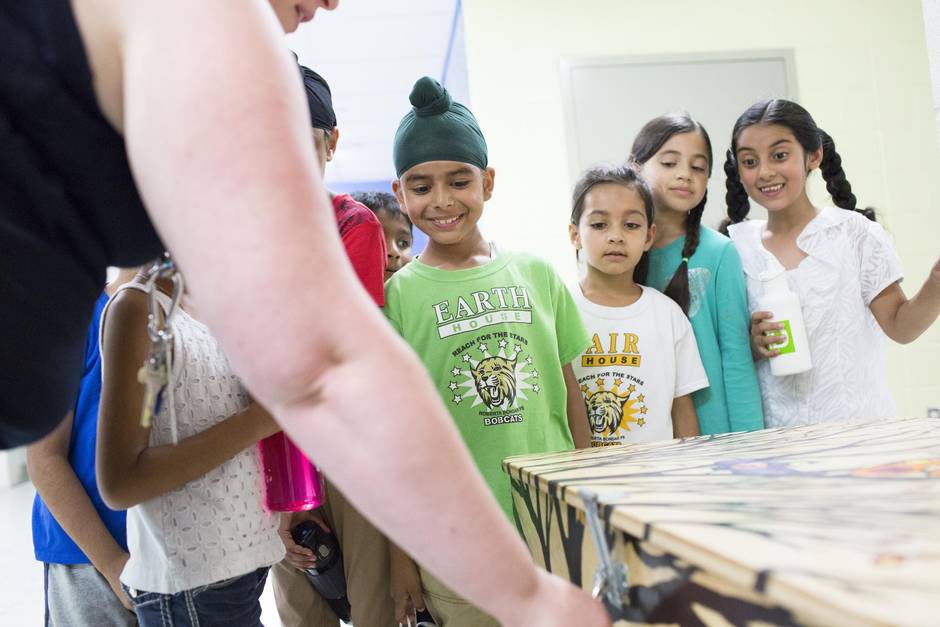 Roberta Bondar Public School is one of about 100 Canadian schools that have adopted year-round classes. (Michelle Siu/The Globe and Mail)

“I think parents appreciate the flexibility,” Ms. Grewal says. “I think they do buy into the thinking that two months is too long.”

Staff joke about being able to book cheap holidays in October, but really, says principal Sheryl Johnston, students and teachers need breaks throughout the year rather than just one long two-month stretch. “There is an impact of having frequent breaks on staff – and student-wellness. If you have a holiday to look forward to, it’s more positive – and it’s coming more frequently.”

In the first week of school, Grade 8 teacher Jennifer Niven and her class have read The Giving Tree and are creating an abstract art project. In another classroom, Grades 2 and 3 teacher Sarah Downes is teaching her class about measuring, counting and patterns.

The teachers say they don’t spend much time reviewing material from the previous year. There is little need to do so because the students haven’t been away for too long. Instead, they launch right into the curriculum.

“When the students are in Grade 3, they are doing Grade 3 work on Day 1,” Ms. Downes says. “We don’t have to spend a month reviewing, or a week reviewing the rules of the school. Everybody remembers what they’re doing.”

Ms. Downes, who has also taught at a school with a traditional calendar, believes the year-round calendar helps students. “They know how to be at school, they haven’t forgotten everything.”

Mya Malhotra, a student in Ms. Downes’ class, is happy enough to be back at school, chatting with her friends as she eats her lunch. The bonus of being at school in August: She got an early start on new school supplies, including a pencil case, backpack and lunch bag.

The seven-year-old says she is both happy and sad to be back.

Happy? “Because I missed school.”

Sad? “Because it was so fun on the break.”

Luckily for Mya, she has a two-week holiday just around the corner in October.