Toronto's elite may have been surprised to find an email pop up in their inbox last week from flamboyant society fixture Salah Bachir, declaring: "You ARE NOT invited to a long, formal evening of so-so food, questionable entertainment, and uncomfortable shoes" to raise money for St. Joseph's Health Centre, where he's been undergoing dialysis treatment the past four months.

Instead, the veteran philanthropist, whose nickname is "Gala Salah," simply asked his friends to donate. Given his 24-karat Rolodex, he expected a response, but he was unprepared for the outpouring from across the country, and as far away as Lebanon. "Several friends have even offered me a kidney in addition to cash," he says demurely. "I was very flattered, of course."

If "Gala Salah" doesn't even need to throw a party, what does this say about philanthropy in Toronto these days? Clearly, the era of flashy and formal black-tie fundraisers – like the late Brazilian Ball – is over. Today, organizers are appealing to a younger generation with fundraisers that feel more spontaneous and laid-back, such as salon-style events in private homes. "It's all about making the experience more intimate, private and exclusive," says seasoned philanthropist Danny Greenglass.

One of Toronto's leading philanthropists, Kate Daniels, says the most successful events put substance over flash. They know their core demographic intimately and go for broke to give guests a rollicking good time. "Friendraisers" are also all the rage: events often held in private homes to raise awareness, not just funds.

Last week, she and her husband David invited 17 at-risk youth from across the GTA to their home for a friendraiser called Shakesperience, to support teacher Marvin Karon, who is devoted to keeping Shakespeare in inner-city schools. "We had Stratford actors doing Shakespeare with the kids in our living room," she recalls. "It's about giving them focus and an opportunity to really gain an understanding of what it takes to stay with something. It was great, I have to say."

Ms. Daniels, who has chaired at least six galas including the Art Gallery of Ontario's and the Canadian Film Centre's, says galas can be "an awareness tool," because "they allow you to tap into a group or resource of people who might not be engaged otherwise. But charities aren't there to throw parties. We've all been to enough parties in our lifetime. They're there to raise money. When I go to work on a gala I'm clear I don't want to spend money to do it. I want to raise money."

Fundraising events that focus on a broader audience are also becoming more personal and fun. In addition to the innumerable walks, runs and bike rides for charity, there's been a surge in micro-events geared to millenials, everything from scavenger hunts to golf and hockey tournaments.

And making your theme fit the crowd you want to attract is a powerful tool. On May 16, the first annual Eco-Charity Mixer will be held at an Entertainment District club called The Loft. With tickets only $30, organizers hope to grab the attention of young urbanites who will sip on organic wine and locally sourced hors d'oeuvres. They hope to entice up-and-comers to team up with eco-friendly businesses to promote sustainability. (Funds go to the Sick Kids Foundation.)

The change is most dramatic, however, at society events. The grand, spectacle-filled Brazilian Ball ended last year after a 40-year run. On the other hand, the Best Buddies Gala has always sold out quickly through its 19 years, and its lead organizer, Mr. Greenglass, credits the event's small, welcoming size. "We have three people on the steering committee and we try to keep it small, to 300 people," he says. He's raised $15-million since 1994, keeping costs down and focusing on the cause.

Big galas still have a place, he says. "They offer charities profile and exposure," Mr. Greenglass adds. "But we got rid of doing gift bags five years ago. You don't need all the fluff. It's all about maximizing what goes to the charity."

Mr. Greenglass has also moved decisively into the newer model of charity event with a private party, the Grand Cru Culinary Wine Festival, that he co-hosts in his home with partner Joe Brennan to raise money for Toronto Western and Toronto General Hospital. "We have 32 people to our house. We charge $25,000 a couple. We hire world-renowned top chefs and the best vintners. It's about offering a really unique experience."

In eight years, they've raised $1.5-million, including $400,000 from one dinner. His goal is to reach $20-million to build a new surgical suite for Toronto Western, where he had brain surgery last year.

Mr. Bachir's latest non-event was also inspired by his own experiences, and was also successful. In the last two weeks, Mr. Bachir, head of Cineplex Media, has raised $180,000 to replace clunky TVs in St. Joseph's chemo and dialysis wards, where patients (like him) sit for hours getting treatments. His goal was to hit $150,000.

He credits this to the no-nonsense but personal tone of his appeal. "We're raising money for something very specific, rather than a broad cause," he says.

"I heard from many friends and acquaintances who have spent bhours and hours with loved ones while they undergo chemo or dialysis," Mr. Bachir adds. "One friend even mentioned that the machines at her gym have better TVs than the ones for patients undergoing treatment. People can relate."

Editor's note: This article incorrectly named a private party charity event as Ground Crew. The name of the event is Grand Cru Culinary Wine Festival or Grand Cru for short. This version has been corrected. 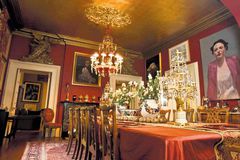 The search for a new it spot
December 16, 2006
Samba swan song: Toronto’s Brazilian Carnival Ball comes to an end
September 8, 2012 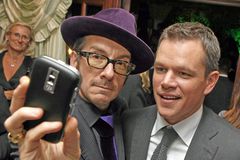 Famous Players drops same-sex advertisements
February 19, 2005
Follow us on Twitter @globetoronto Opens in a new window
Report an error Editorial code of conduct
Due to technical reasons, we have temporarily removed commenting from our articles. We hope to have this fixed soon. Thank you for your patience. If you are looking to give feedback on our new site, please send it along to feedback@globeandmail.com. If you want to write a letter to the editor, please forward to letters@globeandmail.com.
Comments