We all know how this script is supposed to go: exposure, confession, repentance, rehab, recovery, redemption. But Rob Ford has torn up the script. That's why he has confounded us and made worldwide news. He is not behaving the way disgraced figures in public life are supposed to.

People who've spent countless hours trying to reason with him now say that he will never, never quit. The reason, as one of them told me, is that he's terrified he will not be able to come back. He feels that without his job, he's nothing. That is why he's clinging to it like a drowning rat.

The man is drowning before our eyes, and he doesn't even know it. It's painful to watch. But it's impossible to look away. His twisted psychodrama has become ours, too.

The Rob Ford Reality Show has become an endless cycle of sordid behaviour, denial, lies, proof, apologies, and a vow to carry on until Oct. 27, 2014, when the people will have the final say. With every revelation, we thought it couldn't possibly get worse. And then it did. This week's lowlight came on Thursday, when the mayor, sporting an outsize Argos jersey, held a scrum at City Hall to deny that he'd been stoned on booze and coke and partied in his office with a hooker. That was no prostitute, he said indignantly. That was his friend! Nor was it true that he had approached a former female staffer with a coarse sexual suggestion – which he proceeded to describe in language that no man in public office has ever uttered in a public place. The idea that he would do a thing like that was ridiculous, because "I'm happily married, I've got more than enough to eat at home." He looked quite pleased with this witticism.

You'd think things couldn't possibly go downhill from there. But with Mr. Ford, there is no such thing as hitting bottom. Having repeatedly berated the media for invading his family's privacy, he dragged his wife before the media to stand by his side as he delivered his next apology. She looked haggard. Renata Ford is seldom seen in public, and some people weren't sure who she was. Then he made her run the gauntlet of the media hordes and left her in the parking garage, where reporters pursued her to her car.

Nobody knows why Mr. Ford became so unhinged. Former staffers say his problems got much worse after he took office. By this year they were running mickeys to him several times a week and watching him drive drunk. When he's high or under stress – which is a lot – Mr. Ford becomes irrational and ungated.

One thing we do know. The Ford family are enablers – mother, sister, brother, all of them. They've spent years telling their beloved Robbie that he's a terrific guy. Their denial, like his, is impenetrable. The most odious of them all is Doug, who won't tell his younger brother to get real and sober up. Would he rather see him wrap his car around a tree?

In truth, rehab would not do Mr. Ford much good. Rehab requires insight, and he doesn't have any. He exists in an alternate universe, where reality is bent to suit himself. It's fashionable for people to say they feel sorry for him, because he has substance issues, as they are politely called these days, and is therefore sick and in need of care. But I can't bring myself to feel sorry for him. He has lied and lied and lied. He has inflicted untold misery on all the people closest to him. He has thrown the city he says he loves into chaos. He has failed his kids. He has even failed the true believers of Ford Nation. And he won't allow himself to know it, because if he did, the knowledge might destroy him.

Mr. Ford can't possibly be re-elected now. He's been disinvited from the Argos game and the Santa Claus Parade. Even if he hangs on to his title, City Hall will find a way to work around him. He will depart from office in disgrace, leaving a trail of empty vodka bottles behind him.

The city will handily survive Mr. Ford. What will become of him is another, darker matter. 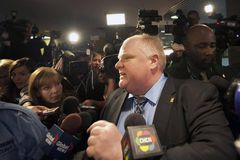 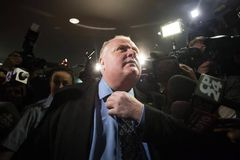 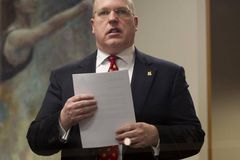 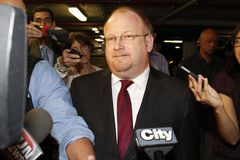 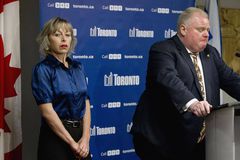 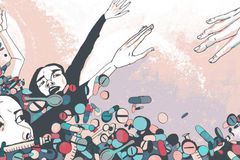 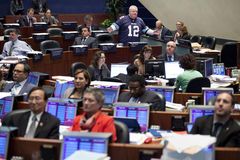