If you take down a tree in Toronto, you’ll be required to plant new trees to replenish the urban forest. But how many saplings does it take to fill the place of a mature tree?

That’s a crucial question for those trying to maintain Toronto’s urban forest, where new trees frequently replace those being removed for construction or lost to disease. “If you took down an 80-year-old tree, it’s going to take 80 years to grow a new tree back to replace that,” said Ian Bruce, an arborist and owner of Bruce Tree Expert Company.

And yet the City of Toronto is committed to that near-impossible task for many thousands of trees. The urban forest is an important part of the city’s identity, and city hall has made a formal commitment to increasing the number of trees – citing their environmental benefits as well as their positive impact on the city’s streetscapes.

This means combatting a series of threats to the canopy, including mistreatment of older trees and the removal of some for new development. If Toronto is a “city in a park,” the health of its green canopy is unclear.

There are about 10 million trees of at least 116 different species in Toronto: 60 per cent grow on private property, 34 per cent are found in parks and only 6 per cent are owned by the city.

A report by TD Bank in June found that in addition to providing the city with an estimated $7-billion in economic worth, Toronto’s urban forest improves air quality by removing around one-quarter of the annual emissions produced by industry within the city (the equivalent to the amount of particulate matter released by over 1 million vehicles a year). Toronto’s trees provide $6-million in cost savings to households through shading and climate moderation (for a house, the yearly net cooling effect of a tree is equivalent to that of 10 room-sized air conditioners), the report said. Trees can also increase property values by as much as 27 per cent, according to the city. 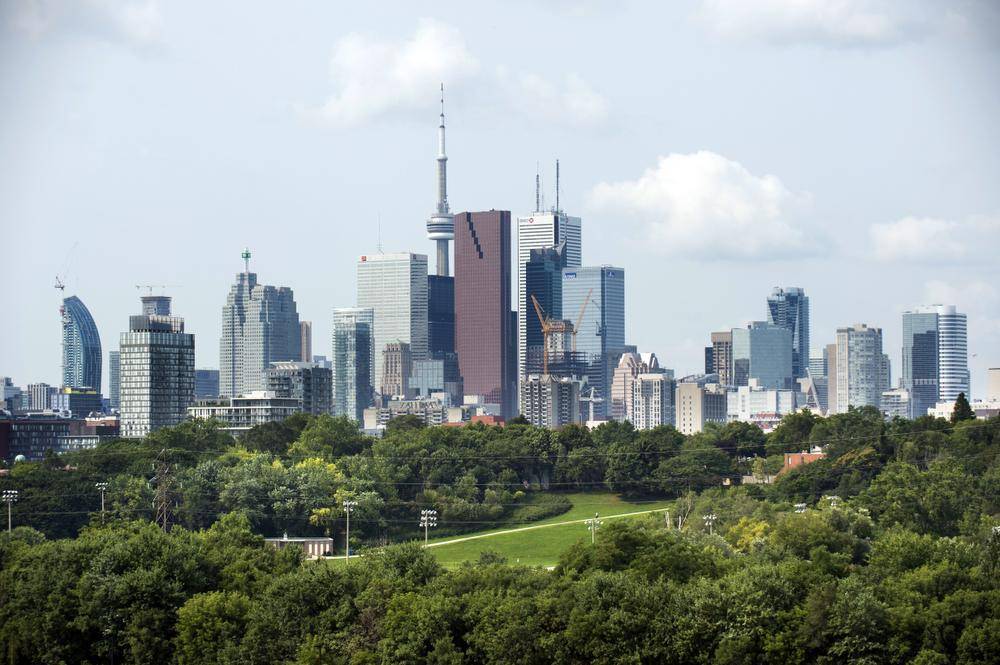 The city has set a goal to increase canopy coverage, boosting it from its current 28 per cent to 40 per cent by 2057. (Fred Lum/The Globe and Mail)

At a time when construction is booming, the city has set an ambitious goal to increase tree canopy coverage – up from its current 28 per cent to 40 per cent by 2057 – that relies heavily on the action of private residents to plant and maintain trees on their property. While a bylaw prohibits cutting down private trees if they are healthy and have a diameter of at least 30 centimetres, it’s possible for residents and developers to get permission from the city for removal in exchange for planting replacement trees.

Jason Doyle, the City of Toronto’s director of urban forestry, is responsible for overseeing the implementation of the city’s forestry management plan. He says that while funding is there – the city is incrementally increasing its urban forestry budget to reach about $100-million by 2022 – a balance must be found between canopy expansion and urbanization.

When proposing a new building or construction project, developers must submit an application to the city with an arborist report that includes a preservation plan for the trees on site. They can also apply for permits to remove those trees, however, and, in 2013, the city received 2,667 applications for construction-related removals on private property.

To meet the canopy goal, Toronto needs to add about 570,000 new trees a year over the next 50 years. The city’s urban forestry management plan calls for planting on public and private property and natural regeneration.

Trees have become a political issue in other North American cities. In Chicago, Mayor Rahm Emanuel promised to increase tree planting by 30 per cent after The Chicago Sun-Times obtained data that showed the city had been ramping up the number of tree removals from parkways and other city-owned property over the past few years. In Sacramento, Calif., the local electric utility gives residents free shade trees if they agree to plant and maintain them in the recommended location.

In Toronto, during budget debates in January after the ice storm, Mayor Rob Ford made a motion to council to cut $7-million allocated for 97,000 new trees. The motion failed. More recently, mayoral candidates Olivia Chow and John Tory have made campaign promises to plant more city trees: Ms. Chow is vowing to double the city’s tree planting, while Mr. Tory is calling for about 3.8 million trees to be planted over 10 years. 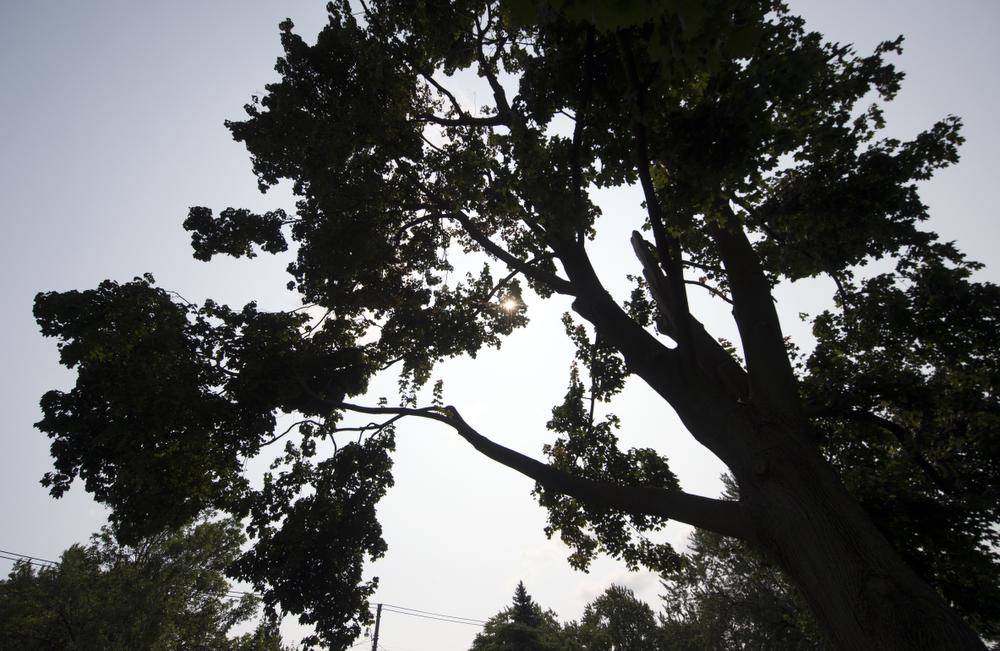 City-owned trees, like this one in Riverdale Park East, form only about one-third of the city’s canopy; yet all mature trees require care, and once gone they’re difficult to replace. (Fred Lum/The Globe and Mail)

But tree experts, including former University of Toronto forestry professor Andy Kenney, are concerned that canopy goals put more emphasis on new planting rather than maintenance of the existing urban forest.

“We can’t just stick them [trees] in the ground and then pat ourselves on the back and say ‘There, we’ve done it.’ We haven’t,” he said.

Street trees are often in rough shape and often have higher mortality rates than those found in parks and yards. The city is finding new ways to plant trees under sidewalks, including devices known as silva cells, which shelter soil and roots in rigid boxes below the ground, allowing tree roots to grow without the weight of the pavement above compacting the soil and killing the trees.

In 2013, the city removed 19,919 city-owned trees from parks and streets because they were “dead, in a state of decline, or structurally unsound.” Of those 19,919 removals, 7,924 were street and park trees damaged by the emerald ash borer. After December’s ice storm, another 1,500 trees were added to the tally.

And there are other impediments to meeting the canopy target. Mr. Doyle cites a shortage of arborists and a lack of public education on tree planting on private property. “I can’t say I’m going to meet these performance measures when the resources just aren’t there to help us,” he said.

Mature trees often die in the decade following the completion of a development project because builders don’t take the proper measures to protect them, said Philip van Wassenaer, the principal consulting arborist and owner of Urban Forest Innovations, a company that often writes arborist reports for developers.

“There are many, many instances where trees can be preserved and they’re not being preserved,” he says, “because the type of recommendations we give aren’t being implemented and the trees are being fatally damaged during construction.”

Arborists such as Mr. Bruce question where there’s space for residential trees in the rapidly growing downtown, especially when so many homeowners are stripping away soil by renovating their yards to add patios and pools. “No tree will ever grow to be 80,100 years old because there is just not enough soil volume,” he said.

Tim Grant, the president of the Harbord Village Residents’ Association, has long been counting on a tree next door to provide a dark and dense canopy that shades his house. Not this spring; the Norway maple came up stunted, its spindly branches naked. Mr. Grant had noticed his neighbour excavating his yard and laying paving stones close to the tree’s base. “Clearly it was enough to cause a huge shock to the tree, and the tree may well be toast,” he said.

Mr. van Wassenaer puts it simply: “If you don’t provide the soil and the space, don’t fool yourself that you’re going to have a big tree there.”

Mr. Grant hopes it’s not too late for his neighbour’s Norway maple. He has called the city to look into it. 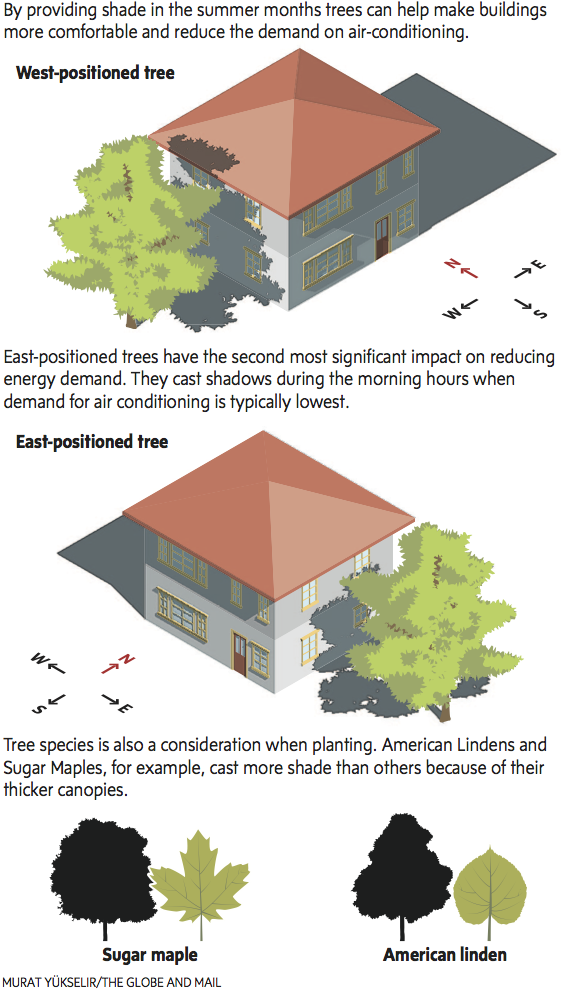