Ontario Premier Kathleen Wynne says there's no plan to keep all the carpool lanes put in for the Pan Am Games, but that some may return as a form of toll road.

The 235 kilometres of high-occupancy vehicle lanes requiring at least three per car, mostly on Toronto-area highways, were initially billed as a temporary measure. But as drivers started to adapt to them, some transportation advocates began calling for them to stay.

On Wednesday, Ms. Wynne tried to squelch speculation about the possibility, saying her government doesn't intend to turn these lanes into a permanent fixture. Still, she did not take the option off the table, and noted the province's general commitment to implementing high-occupancy toll (HOT) lanes.

"Whether the configurations that have been put in place on provincial roads for the Pan Am Games are exactly what will transpire when we put in place the HOT lanes – that's not our plan at this moment," Ms. Wynne told reporters at an unrelated event with Toronto Mayor John Tory. "But we have committed to HOT lanes, and we maintain that commitment."

HOT lanes – a variant on carpool lanes that allow drivers with insufficient people in their vehicle to pay for access – are increasingly common across North America. The idea has been mentioned in the last two Ontario budgets, but no apparent progress has been made.

"Premier Wynne's idea of making these lanes a permanent fixture, and charging a toll on top, is nothing more than a money grab," CTF Ontario director Christine Van Geyn said in a statement.

Mr. Tory, meanwhile, was a little more circumspect, saying that any decision on the HOV lanes should be made based on "facts and experience."

"I think if there's any frustration that I've heard it's that the HOV lanes during Pan Am have been underutilized," he said. "I think as the Premier said, the lesson for us all is to take lessons from what has happened from this experience, and learn from that."

That could take time. A striking feature of these Games is how little actual data about transportation have been available. Anecdotes abound, but facts are few.

The Ontario Ministry of Transportation will not provide traffic figures for the last few weeks, saying it doesn't have the time to pull it together. Similarly, Metrolinx, the agency that oversees GO Transit, says that staff who might normally gather and crunch ridership data have been reassigned for the duration of the Games.

"We made a decision early on that we would be providing that data, but after Pan Am, so that we wouldn't be utilising staff time to determine it," said Metrolinx spokesperson Anne Marie Aikins. "It requires a lot of time and effort, and so they're not doing it."

The Toronto Transit Commission has been more forthcoming, though its numbers lag by a few weeks. The agency was able to release this week figures showing a small ridership rise just after the HOV lanes were installed on June 29, but had no information about the period since.

The TTC figures show that its ridership from July 1 to 4 was 94,000 higher than the same period last year, a climb of just under 2 per cent. What was driving that increase is still to be studied.

"They are up, obviously," said TTC spokesman Brad Ross. "Is that anything to do with Pan Am? It would be very difficult for me to say that." 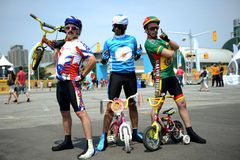 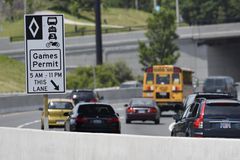 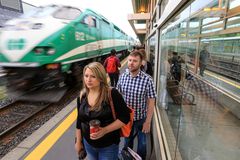