Toronto Mayor John Tory says he is tired of being treated like "a little boy … in short pants" by the province, slamming Ontario Premier Kathleen Wynne for vetoing his proposal to put tolls on two city highways.

Although insisting to reporters that "I'm not angry today … I'm frustrated," Mr. Tory grew increasingly testy as a long media availability went on. He called the provincial government "paternalistic" and "short-sighted" and repeatedly criticized it for downloading costs and then denying the city the ability to raise money.

Ms. Wynne's decision to nix Toronto's tolls on the Gardiner Expressway and the Don Valley Parkway was accompanied by a promise to increase the amount of gas-tax money going to all municipalities. The current two-cents-a-litre contribution would eventually be doubled to four cents, starting in 2019 – assuming Wynne's Liberal party is re-elected.

The extra money for Toronto, which should total about $170-million annually, was welcomed by Mr. Tory. But he mocked the notion of treating the provincial capital as just another municipality, analogous to Wawa, which he noted has a single transit bus that comes when you call it.

"The City of Toronto is Canada's champion. We are the only global metropolis in this country," Mr. Tory said.

"It is time that we stop being treated, and I stop being treated, as a little boy going up to Queen's Park in short pants to say 'please, could you help me out with something that I thought was in the City of Toronto Act that I could do,' and to be told 'no, I'm terribly sorry, go away and come back some other day.'"

The province quickly shot back with a statement suggesting that Toronto was over-stating how much tolls would have raised, thereby making it look as though the gas-tax increase would leave the city short.

The war of words came hours after Ms. Wynne confirmed that Toronto would not be allowed to implement tolls. Those close to the mayor said that he had been told privately by the province that it would back him in his proposal, which was overwhelmingly supported by city council. The mayor suggested the same.

"I will tell you that the course of action that unfolded today … is inconsistent, at least in part, in some considerable measure, with the discussions we were having before on this subject," Mr. Tory said.

The provincial decision to block tolls on the two highways came just over a year before Ms. Wynne must face the electorate. Her party is lagging badly in the polls and both opposition parties were against these tolls, leaving her vulnerable among 905 commuters.

At an event in Richmond Hill, Ont., Ms. Wynne argued she had to reject tolls until such time as people who now drive have more options.

"As our communities grow, the work of building better transit has to accelerate," she said. "Commuters need to have reliable transit in place before revenue-generating measures like road tolls are implemented … people need choice and there needs to be affordable options in place."

Instead of tolls, Ms. Wynne said the province would gradually double the amount of the gas tax that goes to municipalities by 2021.

Rejecting tolls in favour of more gas taxes means that the city will continue to be beholden to the largesse of the province. It also means that the possible congestion-fighting benefits of tolls will be forgone. And it makes the city reliant on a revenue source that is shrinking across the western world as vehicles become more fuel-efficient and people drive less.

The proposal to toll the DVP and Gardiner came amid increasing concern at City Hall over the growing mountain of unfunded capital projects in Toronto. Tolling was not expected to cover more than a fraction of the total – which now exceeds $30-billion – but part of its appeal for city politicians was that it would be an independent source of revenue. 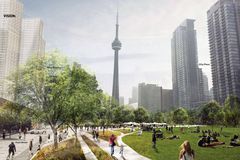 Toronto city council endorses highway tolls, still needs provincial approval
December 14, 2016
Wynne to halt Tory’s plans for road tolls on Gardiner, DVP
January 26, 2017
Follow Oliver Moore on Twitter @moore_oliver
Report an error Editorial code of conduct
Due to technical reasons, we have temporarily removed commenting from our articles. We hope to have this fixed soon. Thank you for your patience. If you are looking to give feedback on our new site, please send it along to feedback@globeandmail.com. If you want to write a letter to the editor, please forward to letters@globeandmail.com.
Comments