Mayor John Tory went way, way out on a limb when he made his bold proposal last fall to impose tolls on the Gardiner Expressway and the Don Valley Parkway. Premier Kathleen Wynne left him dangling there, giving him the clear impression she would not stand in the way. Then, on Friday morning, out came the saw. Sorry, no tolls. You could almost hear the whooshing sound as Mr. Tory fell to earth, clutching at branches as he fell.

This was an act of pure political cowardice. Ms. Wynne knows the city desperately needs better public transit. She knows governments need to find a way to pay for it. She knows what it took for Mr. Tory to propose something as visible as tolls, sure to rile up suburban car commuters.

Yet, to try to save herself, she has overruled the mayor and crushed what was the signature initiative of his first term, the bravest political step by any mayor since the birth of the modern city in 1998. Pathetically unpopular, battling a tax revolt over electricity rates, facing obliteration at the polls next year and under attack from opposition parties threatening to make tolls a big election issue, she ran for the hills. Mr. Tory, and the city he governs, is the victim.

This was an act of pure arrogance, too. These, after all, are Toronto's highways. The provincial government downloaded them to the city. Toronto owns them. Toronto pays to fix them. Yet now, thanks to Ms. Wynne, Toronto cannot toll them. It cannot charge a fee for the use of its own asset, even if the money would help maintain that asset.

Toronto may be the country's sixth-largest government, larger than the governments of some provinces, but if uncle wags a bony finger no, that is the end of it. As Mr. Tory puts it, he feels like a little boy in short pants when he goes to Queen's Park. What was the point, he wonders, in passing legislation – the City of Toronto Act, giving Toronto special taxing powers to meet its needs – if the province is going to exercise a veto when the city tries to use those powers. It is the height of paternalism and it leaves Toronto effectively infantilized.

Ms. Wynne did not even have to endorse Mr. Tory's toll plan. She could have simply said: It's up to him; Toronto's roads, Toronto's decision. If the city's elected representatives are in favour, who am I to stand in the way? City council, after all, voted convincingly to approve the toll plan.

But no. Even the chance that she would have to wear the tolling decision sent her scurrying. The car-dependent suburbs and exurbs of Toronto are rich with voters and chock full of key ridings. She looked into the red eyes of those cranky car commuters and blinked. Her offer to share money with cities from the gas tax is a necessary but hardly sufficient attempt to make amends. Taxpayers will still pay – though the pain will be spread more broadly – and Toronto will still remain dependent on provincial benevolence.

Perhaps worst of all, this was an act of shocking shortsightedness. Toronto, like cities around the world, is struggling with the burden imposed by the automobile. Its highways are jammed and crumbling, its suburbs spreading to the horizons, its transit sadly underfunded. If it is to continue to grow and thrive, it simply must find a way to break the tyranny of the car. Imposing road tolls would have been one small step in that direction. By placing an additional cost on highway use, tolls can ease the burden of auto emissions on the environment and the burden of traffic on roadways, not to mention raise millions for a desirable goal: better transit.

Ms. Wynne, of all people, should understand this. She is a keen environmentalist who warns about the urgency of cutting greenhouse-gas emissions. She is a champion of public transit who has dedicated billions of provincial dollars to transit expansion. She is just the kind of person who should be getting behind new ways to pay for transit.

That is why her decision is so disappointing. If a green, left-leaning, transit-loving premier won't approve tolls to pay for transit expansion, what premier will? Ms. Wynne has killed the idea not just for today, but for many years to come – perhaps for good.

Cities across Canada sat up and paid attention when Mr. Tory came out for tolls. If the country's biggest city had tried them, others might have followed and an idea that is already widespread in other parts of the world might have taken hold here. It won't happen now. By dousing it with an icy bucket, Ms. Wynne has done a disservice not just to Mr. Tory but to the country. 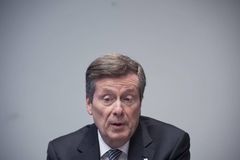