At 9 a.m. on March 20, polls will open in Tibetan community centres around the world. By 5 p.m., when they are scheduled to close, some 100,000 Tibetans living in exile are expected to have voted in the historic election to replace current prime minister, Lobsang Tenzin. In Tibet itself, however, an estimated six million Tibetans are not permitted to cast ballots because of Chinese control.

According to Lhakpa Tsering, administrative manager of the Tibetan Canadian Cultural Centre in Toronto, all exiled Tibetans over 18 that hold a Green Book identity card will be eligible to vote by secret ballot – both for one of the three candidates for prime minister and for two of the five Tibetans seeking election to the parliament in exile. However, they must also have paid the $46 annual voluntary payment, which is used to support the exile government's activities.

In Canada, voting stations will be set up in four cities – Toronto (with 1,089 registered voters, the country's largest Tibetan voting bloc), Montreal, Vancouver and Calgary.

The sealed ballot boxes will be sent to the Central Tibetan Administration's New York office, where they will be counted. The results will then be forwarded to Dharamsala, in northern India, the seat of the government in exile, from where the winners will be announced.

By far, the largest contingent of exiled Tibetans resides in India – about 40,000 people.

The formal transfer of prime ministerial power will occur in August, when Mr. Tenzin steps down. He has served two five-year terms in the office, known in Tibetan as the Kalon Tripa.

One question that still hangs over the electoral proceedings is the fate of some 20,000 Tibetans living in Nepal. During preliminary run-off votes for prime minister last year, Nepalese authorities bowed to pressure from China, and prevented voting. Mr. Tsering says there are fears that similar restrictions will be put in place for the March 20 vote.

Some 15,000 Nepalese police were deployed Wednesday to break up a rally of Tibetan refugees in Kathmandu. The demonstrators were seeking to mark the 52nd anniversary of the Tibetan uprising, a failed attempt to liberate the nation from China in 1959. Nepal's official one-China policy precludes the possibility of an independent Tibet.

The candidates for Tibet's next prime minister

Lobsang Sangay, 50, is a senior fellow in the East Asian legal studies program at Harvard Law School. Raised and educated in a refugee settlement camp in Darjeeling, he earned his law degree at Delhi University and came to the United States in 1995 on a Fulbright Scholarship. Attending Harvard Law School, he completed his PhD there in 2004. He wrote his doctoral dissertation on democracy and history of the Tibetan government in exile from 1959-2004. While still a student, in 2003, he organized five conferences between Chinese and Tibetan scholars, including a meeting between the Dalai Lama and 35 Chinese scholars at Harvard University. In a recent straw poll for the post of next prime minister (Kalon Tripa in Tibetan) of the Tibetan government-in-exile in 2011, Dr. Sangay placed first, winning 41.9 per cent of the votes. Dr. Sangay's approach is said to differ from that of the Dalai Lama, who has long campaigned for a distinct, autonomous Tibet. Dr. Sangay, however, has argued that Tibetans should seek equal rights with other Chinese citizens, and become integrated into the social and political system of the People's Republic.

Tenzin Namgyal Tethong, 63, is president and founding member of the Dalai Lama Foundation and a member of its board of directors. He was the founder of several key Tibet initiatives in the United States, including the Tibet Fund, Tibet House-New York, Sheja Magazine, the Tibetan Youth Congress, and the International Campaign for Tibet. He is a former representative of the Dalai Lama in New York and Washington, and former chairman of the Kashag, the Tibetan Cabinet. Mr. Tethong currently serves as chairman of the Committee of 100 for Tibet and is a visiting scholar at Stanford University. He also played a key role in the launch of International Campaign for Tibet, the Fulbright Scholarship for Tibetan students, Voice of America's Tibetan Section, and the 1,000 Tibetan resettlement project to USA. He organized the Dalai Lama's first visit to the United States and Canada and is the focus of Life In Exile, a film documenting the history of Tibet and Tibetans. Mr. Tethong has said the most important issues are to "advance the cause of a free Tibet, fulfill the hopes and aspirations of the Tibetan people, and ensure that the Tibetan government is protected from Beijing's intentions to destroy it."

Tashi Wangdi, 63, is the Dalai Lama's Brussels-based representative to Western Europe and the European union. In 2004, he served on the task force negotiating Tibetan relations with the China. From 2005 to 2009, he served as the representative to the Americas. Born in Sangag Choeling, Tibet, he spent his childhood studying Tibetan, escaping with his parents to India in 1959, and later pursued postsecondary education in England, earning a BA in political science and sociology from Durham University in 1973. Since 1966, he has been a civil servant in the Central Tibetan Administration, Tibet's government-in-exile. Starting as a junior officer, he rose to the position of kalon, or cabinet minister, and has served in virtually every major department, including religion and culture, education, information and international relations, security and health. Before assuming his position in New York, Mr. Wangdi was the Dalai Lama's representative to the Indian government in New Delhi. With more than four decades in public service, Mr. Wangdi's political views are thought to closely reflect those of the Dalai Lama. 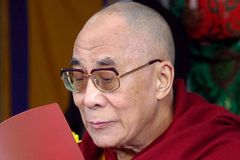