In the blazing Bosnian heat of late spring 1993, Srebrenica was a fetid, dangerous nightmare – a silver-mining town cradled in the hills crammed with tens of thousands of fearful, half-starved, "ethnically cleansed" Muslims, driven there by Serb forces commanded by General Ratko Mladic.

A ring of Serb steel surrounded Srebrenica. Mortars rained down on a mostly defenceless town, protected only by a ragtag rabble of outgunned Muslim defenders and a "safe haven" label applied by the United Nations.

Getting into Srebrenica seemed impossible. Serb commanders weren't disposed to let journalists see the consequences of their work.

In 1993, Srebrenica was just one Bosnian hellhole among many. Gorazde, Bihac, Knin, Banja Luka – there was misery and suffering and war crimes everywhere and, depending on the place, Serbs, Croats and Muslims were the victims.

Gen. Mladic, the senior Bosnian Serb military commander, was a much-feared character. His army had swept across eastern Bosnia and was bombarding its capital, Sarajevo. Already branded a war criminal, the big, meaty man in the green kepi was a hero to many, a long-serving professional soldier in the army of Yugoslav strongman Josip Broz Tito newly self-styled as the saviour of the Serbs.

We – Sue Lloyd-Roberts of the BBC and I – were trying to get into Srebrenica. There were frightful rumours of bodies lying in the streets and desperate refugees eating grass. Near the besieged town, we had been searching for Serb commanders, seeking permission to cross into no man's land without getting shot by their troops.

And then, there he was. Trailed by a retinue of bodyguards, the General jumped down from his command car only metres away. We called out to him. At first he brushed us off, but then, like most Bosnians (Serb and Croat and Muslim alike) his innate hospitality took over. "Stay for dinner," he boomed after tersely answering a few questions. "Then we'll talk about whether I will let you go to Srebrenica."

Generals in all armies issue orders, not invitations. We grabbed at the chance before he could change his mind. Anyway, it was late afternoon and in 1993 in Bosnia, driving after dark was beyond dangerous. After saying grace, Gen. Mladic poured a little slivovitz on his hands, rubbed them together and, with a roaring laugh, said, "Disinfectant." It was a typical soldier's joke, at least among the liquor-fuelled warriors on all sides of the Yugoslav wars.

Dinner was a lengthy affair, thick bean soups followed by heaping plates, glasses of wine and shots of slivovitz, the pale and potent plum brandy. "Za mir, " we toasted – to peace. Gen. Mladic, who prided himself on a correct military bearing, had impeccable table manners. He was a genial host, but lurking close to the surface was a very angry man, deeply offended by his portrayal as a brute, rather than a brave and principled defender of the faith.

"Who has the right to call me a war criminal?" he demanded, well aware of the media coverage. "I was born here. These lands have belonged to us for centuries."

Like many passionate Serb nationalists, Gen. Mladic regarded the West's failure to back him as a betrayal of the people who had saved Christendom from Islam and Fascism. At times he verged on tears, lamenting the collapse of Yugoslavia and his own tormented life. "In the village nearest to my birthplace they killed 42 Serbs. They cut an unborn baby from the belly of a pregnant woman and skewered it on a knife. … They killed everyone except an old man and a two-month-old girl, but they cut off the little girl's hand," he recalled.

But mainly he defended his Bosnian Serb army's ruthless cleansing of hundreds of thousands of Croats and Muslims as a strategic – if little understood and underappreciated – strike to save Europe from the Islamic hordes that would overwhelm it. "The Islamic world does not have the atomic bomb, but it has the demographic bomb," he said. "The whole of Europe will be swamped by Albanians and Muslims."

Although I didn't know it then, the tirade was a harbinger of the "clash of civilizations" debate that has raged through the first decade of the 21st century.

The long, boozy evening was coming to an end and what we really wanted was a note, a permission slip from the supreme Serb commander ordering his troops ranged around Srebrenica to let us pass. He toyed with us a little, warning us we might never get out. Then he scrawled a laissez-passer and signed it with a flourish. But he warned us we would have to walk in to the town and come back out by nightfall.

The evening ended hazily, with many promises to meet again and the uneasy sense that we had just dined with a ruthless, genocidal killer who genuinely believed he was saving his corner of the world.

We spent the night camped with his soldiers. By morning, he was gone.

Walking in to Srebrenica didn't seem like such a good idea in the sobering light of dawn. Gen. Mladic's signature might impress the besieging Serbs, but the town's Muslim defenders didn't know we were planning on paying a call. We left our Lada at the last Serb position. It seemed to take a terrifyingly long time to walk, hands held outstretched to show we were weaponless, to the Muslim lines. I remember wondering if the General's grim sense of humour extended to having a pair of nosy journalists shot in the back.

Rounding a bend we arrived at the first Muslim bunker.

By then, Canadian peacekeepers were deployed in Srebrenica. Two months into the siege, they had a few observation points but neither the firepower nor the mandate to really defend the place. They knew it and so did the Serb forces whose stranglehold on Srebrenica never loosened.

Sustained but only barely by food convoys escorted by blue-helmeted peacekeepers in armoured vehicles, Srebrenica made a mockery of the UN term "safe haven." It was a sprawling concentration camp.

Steadily, Gen. Mladic's army tightened the noose on Srebrenica, cutting off the water supply, blocking food convoys and increasing the murderous shelling in a bid to extract concessions from the United Nations. But the Serb besiegers also did a booming black-market business selling cigarettes, food and even weapons to the Muslim thugs that both ran and defended Srebrenica. Inside the grim enclave, sex and cigarettes were the only useful currency and the weak, the old and the sick were shabbily abused. It was run by Nasr Oric, another Yugoslav army veteran, who managed to drive a Mercedes in a place with no gasoline.

As we walked nervously back out just before dusk, the steady thud of Serb mortars pounding Srebrenica echoed off the hills and bursts of machine-gun fire filled the sultry air.

The Canadian contingent knew Srebrenica was hopeless, that the promise of protection was worthless and that the Serbs had the firepower to overwhelm the defenders and the UN peacekeepers any time they chose. Ottawa pushed the UN hard to find another country willing to deploy to Srebrenica and in February, 1994, an even smaller and less well-armed contingent of Dutch soldiers took over the "protection" of Srebrenica.

By the summer of 1995, the tide of war in Bosnia was turning against the Serbs. NATO warplanes were flying air strikes against Gen. Mladic's forces. But the terrible, duplicitous folly of a UN promise of "safe haven" was about to play out bloodily in Srebrenica.

Gen. Mladic's forces attacked Srebrenica in early July, 1995. The Dutch peacekeepers retreated or surrendered. By July 11, Gen. Mladic was strolling the town's deserted streets while its homes and buildings burned.

More than 30,000 Muslims huddled in fields and abandoned industrial areas. The Serbs separated the women and children and, with TV cameras rolling, transported them out of the enclave. There's a famous shot of a terrified child being lifted by a Serb officer onto a departing truck to be reunited with his hysterical mother. Another picture shows Gen. Mladic handing out candies to children waiting to board buses.

Then roughly 8,000 men and boys were marched into the hills and systematically murdered. Srebrenica, named by the Romans for its silver, had achieved infamy.

The Globe's Paul Koring on his dinner with accused war criminal Mladic
May 26, 2011 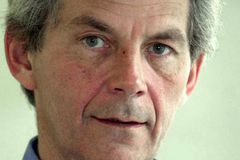 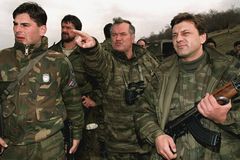 A calm surrender and hordes of angry Mladic supporters
May 26, 2011 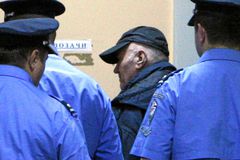