China has every reason to fear doomsday.

In parts of the country, the ground trembles when North Korea conducts an underground atomic weapons test – a particularly foreboding experience with the spectre of nuclear war stirring alarm once again. But when rumours spread that an imminent announcement by astronomers would portend the end of earth, many in China responded not with alarm, but with cheers.

European scientists have promised to reveal an "unprecedented discovery" at 10 a.m. Eastern time Monday, one expected to show an advance in the science of gravitational waves, which provide a new window into the distant reaches of the universe.

But when a Chinese online astronomical news portal asked users of the Twitter-like Weibo service: "Guess what will happen," many raced to discuss a dimmer prospect: perhaps the astronomers would warn of impending cataclysm. And that, to a surprising number of people who joined the conversation, seemed like an appealing prospect.

"It would be great if the doomsday hypothesis is real," suggested one of the most popular posts. "To die painlessly is such a huge blessing for a human being."

Statistically, China has every reason to be among the most optimistic countries on earth. Its economy continues to surge. Growing millions in its populous middle class enjoy car-owning, jet-setting comforts on par with any developed country. As China's international influence grows, too, its people discover new reason for confidence on the global stage. But beneath the shimmering vistas of new cities and bullet trains, a dark malaise festers.

"I want to die immediately. Living in Beijing, the survival philosophy of this city chokes me," said Geng Chuandi, 26, a magazine editor who was disappointed to discover there would be no actual doomsday announcement.

"It's always about comparing with others: who earns more, who has a better life, who marries a better guy." Meanwhile, her own ability to accumulate wealth lags behind her family's needs. "Beijing is too competitive and has too little mercy for those who lose," she said. "I can't afford to lose and I can't afford that mental pressure, either."

For some, disaster doesn't sound like a terrible alternative.

"Judging by people's desire for doomsday, I can see what tough lives they are living right now," wrote one person on Weibo. "Up early for work, big debts to pay, another 30 pounds to lose, a dream boyfriend who will never have a crush on you. See, these are the pains for Chinese people, and doomsday could help you get away from them right away."

The very idea of doomsday offers a frisson to a generation angry at pollution, unhappy with social inequality and saddled with ennui, said Zhang Linyue, 19, a student at the University of Chinese Academy of Social Sciences.

"I was educated from the very beginning of my life to be obedient and follow the path my parents set for me," she said. "We are like faceless people. Doomsday sounds like something that could inject some freshness into our daily routine."

But it's not just young people: A growing body of research shows that China has struggled to match its immense economic gains with equally dramatic increases in life satisfaction among its people.

People in China today are, on average, no happier than they were near the beginning of the country's period of breakneck growth, according to the World Happiness Report 2017. In fact, "well-being today is probably less than in 1990," according to an annual report by the UN-sponsored Sustainable Development Solutions Network.

"China's soaring GDP growth over the past quarter century is viewed by many analysts as the hallmark of a successful transition from socialism to capitalism. But if the welfare of the 'common man' is taken as a criterion of success, the picture is much less favourable," the report said.

One study showed that 40 per cent of first-year students at Peking University, the country's most prestigious, consider life meaningless – a startling number of brilliant minds with brilliant prospects who, one academic said, suffer "Empty Heart Disease."

Further research points to higher rates of childhood depression in China than in Western countries, although Chinese authorities have produced no formal national-level figures. World Health Organization surveys, however, show that overall rates of depression in China remain well below those of some Western countries, particularly the United States.

A 2010 study comparing Canadian and Chinese adolescents pointed its finger at the social contortions created by China's rapid modernization, which had added to pressures on children to succeed in school, while breeding a budding individualism that can place them at odds with older generations.

In recent years, Chinese youth have embraced a label for their experience: sang (pronounced "sung"), a Chinese character that formally refers to a funeral or mourning, but in modern usage has come to mean "despondency." Sang culture has good global company, fitting in with the dreary Netflix creation BoJack Horseman and Gudetama, a popular but gloomy Japanese egg-yolk character whose cartoon nihilism could not be more distant from Hello Kitty, which is made by the same company.

"Young people in China need a place to vent their emotions. Sang culture is something that can help them find a sense of identity," said Chen Meixu, 23, a career consultant in Shandong. "My parents don't understand this idea, but I've never expected them to."

"Living is such an ordeal today," she said. "Everything is disappointing," and "doomsday would be a very ideal exit."

Still, the chatter about doomsday on Weibo wasn't all gloom. It also pointed to the willingness of China's digital generation to mull big questions – and the vital role online conversation plays in mediating the country's modern life, even at a time of harsh ideological tightening.

"People on Weibo poke fun at many news and events," said Fei Wang, a scholar at the School of Labor and Human Resources at Renmin University in Beijing. His own friends joined in the doomsday debate, to ridicule the absurdity of it all.

As it turns out, the value in joining a national joke goes beyond millions of people having a laugh. In a country plagued by its inability to raise contentment as fast as its economy, "there are several papers finding positive correlations between the use of Weibo and happiness," said Prof. Wang, who has co-authored some of the most important papers on China's struggles to become happier.

"Not sure if the causation is from Weibo to happiness, but I believe using Weibo could to some extent improve people's quality of life."

The U.S. and China: The world needs a grand bargain
October 13, 2017
Globe and Mail journalist: I was detained by China's secret police. Here's what happened
Subscriber content
August 25, 2017 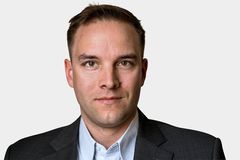