The emissaries of peace arrived under the hot morning sun Monday and strode into a meeting room in the Myanmar Peace Centre in downtown Rangoon. They took their places facing each other across two long parallel tables, the officers in army green on one side, the country's warring ethnic groups on the other. Then they stood up, reached across the tables and shook hands.

in more than six decades of conflict and seven rounds of peace talks.

But on Monday, the negotiators achieved something that may prove more lasting, with the two sides later in the day shaking hands again to finalize the draft of a nationwide ceasefire agreement they hope will end one of the longest running civil wars on earth.

Over seven chapters and nearly 30 pages, the agreement spells out in painstaking detail not only how to lay down weapons – although not abandon them – but also how ethnic groups, the country's powerful military and its nascent democratic parliament can sit for a subsequent political dialogue that, if it succeeds, will remake the country's map and transform it into a federation that accords broad constitutional powers to its ethnic regions.

An end to hostilities is only the first in a lengthy march to reach that goal; the ceasefire agreement has yet to be finalized by ethnic groups, some of which remain actively at war with the Myanmar military and who may choose not to sign.

That would make it a nationwide ceasefire agreement with a large asterisk. The wording was finalized in the middle of some of the most intense fighting in Myanmar in decades, with the military employing air bombing raids, helicopter gunship attacks and heavy artillery assaults that critics say make a mockery of a ceasefire text they dismiss as political theatre.

Myanmar is home to dozens of armed ethnic minorities and some 5,000 militias that have battled with the Myanmarese military to protect illicit drug and timber trades, and as a means of fighting for greater autonomy. The violence has resulted in 500,000 internally displaced people, Human Rights Watch estimates.

Just a few years ago, the mere mention of "federalism" was enough to land a person in jail in Myanmar, which only recently began to climb out of a half-century-long military rule that left it isolated and war-torn (indeed, one of the reasons the military initially took over was out of fears that federalism would break apart the country). Now President Thein Sein's government has agreed to hold negotiations toward federalism. Ethnic groups, in turn, have agreed not to pursue secession.

"Four years ago, this was impossible," said Harn Yawnghwe, a Myanmar-born Canadian who has helped in the peace process. At that time, "the government's position was to use force to solve the problem."

The draft ceasefire agreement suggests a path out of the mess, starting with a requirement that the outlines for a political dialogue to decide the shape of federalism be completed within 60 days of the ceasefire's signing. Thirty days later, that dialogue is expected to begin, providing enough time for talks to be under way ahead of a national election expected in November.

Among the worries has been that an unresolved peace process would unravel with a change in government, particularly since Aung San Suu Kyi's National League for Democracy has had little participation in the talks. On the weekend, however, the Nobel-winning democracy icon agreed to participate in the political dialogue, which Harn Yawnghwe called a "breakthrough."

The ceasefire text also raised hopes that a cessation of fighting will spur further economic change in a country that remains among the poorest on earth.

"If you have peace, you have development," said Aung Tun Thet, economic adviser to Myanmar's president. "We just have to be very optimistic, and hope things will work out."

Yet the list of unresolved issues remains long, chief among them the political structure in a country where the military continues to hold 25 per cent of seats in parliament, and far more through the ruling Union Solidarity and Development Party made up largely of military officers who have swapped uniforms for suits. The ceasefire text offers no amendment to that structure, which is embedded in the constitution; any political deal will require Myanmar's entrenched authority to share power and resource revenues with ethnic groups, a process that is unlikely to be easy.

It will also require peace, which has been elusive.

In recent months, Myanmar's military has been fighting on at least three fronts and it's not clear if the groups the army is battling, like the Kokang near the border with China, will be willing to sign a ceasefire, at a summit among ethnic groups expected in the next month.

"I suspect the Army lacks sincerity in signing this national ceasefire agreement," said Htun Myat Linn, spokesman for the Kokang. "They always ask ethnic, local armed organizations to compromise. But they give up little."

Battles between the Kokang and the military have created 60,000 to 70,000 refugees and hundreds of dead in the past six weeks alone, he said.

Bertil Lintner, a Thailand-based journalist and author who has written extensively about Myanmar, called the ceasefire text "nonsense. It means nothing," he said, "because it's just a piece of paper" written while the worst fighting since 1987 is taking place.

"It's not going to work," he said. "To talk about peace under these circumstances is totally misleading."

Mr. Lintner accused the military-backed government of pushing for a ceasefire as a means of pacifying ethnic groups in order to continue pushing its own agenda, of a country run from the centre, under the existing constitution.

"Nothing can happen unless you sit down and talk about the constitution – what kind of country Burma should be," he said, using a former name for the country. "And it's very unlikely the government or the military would agree to that. They don't want to change the constitution." 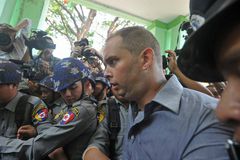 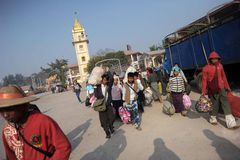