The family of Oscar Pistorius has begun laying out his defence: when he killed his girlfriend, he thought he was shooting an intruder. But new allegations are describing a more horrific chain of events at the home of the famed amputee athlete.

A heavily bloodied cricket bat, found at the luxury home of Mr. Pistorius after the shooting death of Reeva Steenkamp on Thursday morning, suggests he may have used the bat "to viciously assault her," according to a report in a respected South African newspaper, City Press, citing three unnamed sources close to the police investigation.

In a country with rising concerns about proliferating guns and rampant violence against women, there has been little sympathy for Mr. Pistorius so far. An average of nearly 2,500 adult women have been murdered annually since 2007 in South Africa, one in four women has been raped, and a woman is killed by an intimate partner every eight hours, studies have showed.

The women's league of the ruling party, the African National Congress, said on Sunday that Mr. Pistorius should be denied bail. It said the high rate of "femicide" in South Africa is "shocking and unacceptable."

The headline-grabbing allegations by City Press on Sunday were devastating to the image of the star athlete. The newspaper reported that Ms. Steenkamp's skull had been "crushed"; that one shot had been fired from the athlete's pistol in the bedroom before the remaining three shots were fired through a bathroom door; and that the "intruder" claim was impossible because there were no signs of forced entry and because both of them had slept in the bedroom before the shooting.

The leaks from investigation sources, along with the statements from family and friends of Mr. Pistorius, show how both sides are spinning the case to their own advantage. The first official evidence in the murder case won't be released until a bail hearing on Tuesday, but the battle for public opinion is already under way, and the long-celebrated Mr. Pistorius is losing badly.

Mr. Pistorius, the 26-year-old track star known as the "Blade Runner," was the first double amputee to compete against able-bodied rivals in the Olympics. He was a hero in South Africa, lauded for his Paralympic gold medals and his courageous determination to overcome the odds. But now opinion online has turned sharply against him, with social media and Internet forums overwhelmingly critical of him, despite his agent's claim that "thousands" of fans are still supporting him.

His father, Henke Pistorius, outlined the likely defence. "When you wake up in the middle of the night – and crime is so endemic in South Africa – what do you do if somebody is in the house?" he said in an interview published in a British paper, the Sunday Telegraph. "Do you think it's one of your family? Of course you don't."

He said there was "zero doubt" that his son had mistaken Ms. Steenkamp for an intruder. "Without a doubt there was no purpose in it," he said.

Other family members united behind the Olympic hero, insisting that the charge of premeditated murder is wrong. "We have no doubt that there is no substance to the allegation and that the state's case, including its own forensic evidence, strongly refutes any possibility of premeditated murder or indeed any murder at all," said a statement read on Saturday by his uncle Arnold and his sister Aimee.

They said Mr. Pistorius – who broke into tears at a Friday court appearance – was "numb with shock as well as grief."

Mr. Pistorius and his family have assembled a crack team of high-priced lawyers, a top pathologist, and even a well-known London spin doctor – former British tabloid editor Stuart Higgins, whose clients have included British Airways and top English soccer clubs.

His agent, Peet Van Zyl, announced on Sunday that he had cancelled all of the athlete's scheduled race appearances over the next three months. But none of his corporate sponsors – who have paid millions of dollars to Mr. Pistorius – have cancelled their contracts so far, he said.

Some of his friends have tried to rally support for Mr. Pistorius since the shooting, setting up a Facebook page and a Twitter hashtag to defend him. But both were soon dominated by negative comments and harsh criticism from ordinary South Africans.

Much of the backlash is sparked by growing reports that Mr. Pistorius had a history of anger issues, a fascination with guns, and several alleged incidents of threats and physical confrontations involving women and men. He had applied for licences for seven guns, including a .223 semi-automatic rifle, according to the South African newspaper Beeld. 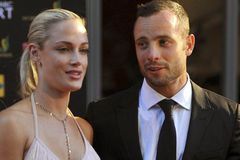