Hands clasped and eyes squeezed shut, the students stand in two lines near the back of a spacious monastery classroom. Several suppress a smile as they wait for an "electric pulse" to make its way down each line, passed from one person to the next with a quick squeeze of the hand. When it reaches a young woman at the end of one row, she races to grab a water bottle from the seat of a plastic chair nearby.

The popular team-building exercise is meant to set the tone for this week-long course on Myanmar's political future. Instructor U Ye Win Naing says many of the two-dozen students in the room are drawn from Myanmar's long-isolated ethnic minority communities and are here to learn about political activism, working with government officials and how to hold their local leaders to account.

Funded by the Canadian government, the course is a small-scale example of one type of development programming that Ottawa hopes to launch in this country. After adding Myanmar to a list of 25 countries that receive the bulk of Canadian bilateral assistance, officials are building a development program from scratch in a country Canada's development minister views as an early test of the government's new policy linking trade, aid and diplomacy.

Following decades of harsh economic sanctions, Myanmar's authoritarian government was welcomed back into the global fold in 2012 after it promised to introduce sweeping reforms and released hundreds of political prisoners. A draft peace accord signed between the government and some of the biggest ethnic rebel groups in late March boosted optimism about the reform process, but there remain persistent concerns about the government's treatment of citizens who criticize it and discrimination against the country's Muslim minority.

In an interview with The Globe and Mail earlier this year, International Development Minister Christian Paradis said Myanmar's unique mix of democratic, economic and social change makes it an ideal test case for the newly amalgamated Department of Foreign Affairs, Trade and Development.

"I think this is a very good country to make the case [for] the amalgamation, about what we're trying to do in terms of aligning the synergies," between trade, aid, and diplomacy, he said.

In addition to programming on democracy and governance, Ottawa hopes to boost Myanmar's prospects for economic development by focusing on the country's mining and agriculture sectors and capacity building for small and medium businesses. That, in turn, will help resource-rich Myanmar develop into a future trading partner for Canada, Mr. Paradis said. 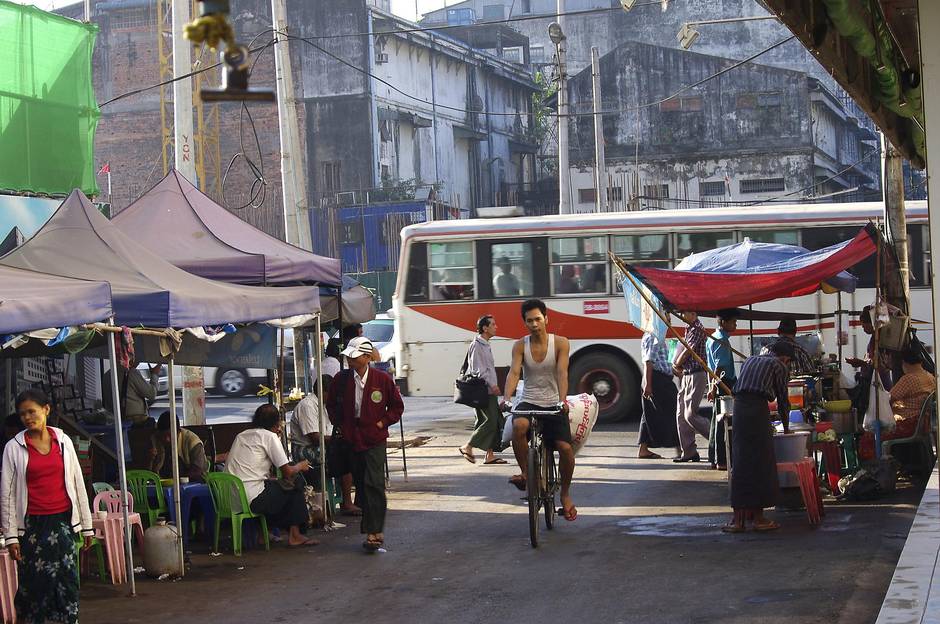 A young man rides his bicycle through a crowded street in downtown Yangon, Myanmar. (Kim Mackrael)

In Myanmar’s former capital, Rangoon, clusters of power lines dangle like spaghetti on every downtown street corner. Plastic chairs are arranged on the sidewalks to support burgeoning roadside eateries, where patrons sip instant coffee or drain a bowl of mohinga, a noodle soup that’s typically served for breakfast.

The pace of change in this country has been extraordinary in recent years. A flood of new car imports has clogged Rangoon’s once-quiet streets. Access to the Internet is no longer restricted – though connections remain unreliable and rare outside of major cities. In Rangoon, SIM cards that used to cost hundreds of dollars can be purchased on the street for less than $2.

“They are dealing with economic reform, political reform and the peace process, and any of these issues would occupy a normal country for a decade,” said Mark McDowell, Canada’s ambassador to Myanmar. “These three once-in-a-lifetime projects of reform are going on and they’re all going on simultaneously.”

Encouraged by promises that the government would transition to democracy, foreign governments lifted their sanctions, setting off a rush of donors and investors. Canada was slower than many to return: The embassy’s diplomatic licence plate ends in the number 43 – indicating that Mr. McDowell arrived in the country after dozens of diplomats from other countries had already set up shop.

The easing of sanctions three years ago triggered new discussions in Ottawa about adding the country to Canada’s list of bilateral development recipients. A senior Canadian official with knowledge of the programming said there was a desire to engage on a number of foreign-policy fronts, including economic, political and development.

“Every other country is coming in here running a development program,” said one Canadian official who spoke on condition of anonymity. “I mean, if you’re going to open an embassy, you’ve got to do something. And a development program is a way to kind of broaden and deepen the relationship.”

A political discussion ensued, and calls went back and forth between Canada’s new embassy in Myanmar and officials in Ottawa about the kinds of development issues that could be addressed. Myanmar was already on a list of developing countries that Ottawa had prioritized for trade and investment, and working on the development side seemed to be an obvious addition.

“It’s not like it’s hard to find things that need doing,” Mr. McDowell said in an interview in Rangoon. “It’s kind of more an issue of narrowing things down so it’s an area where we can make an impact, [where] we have something special to bring.” 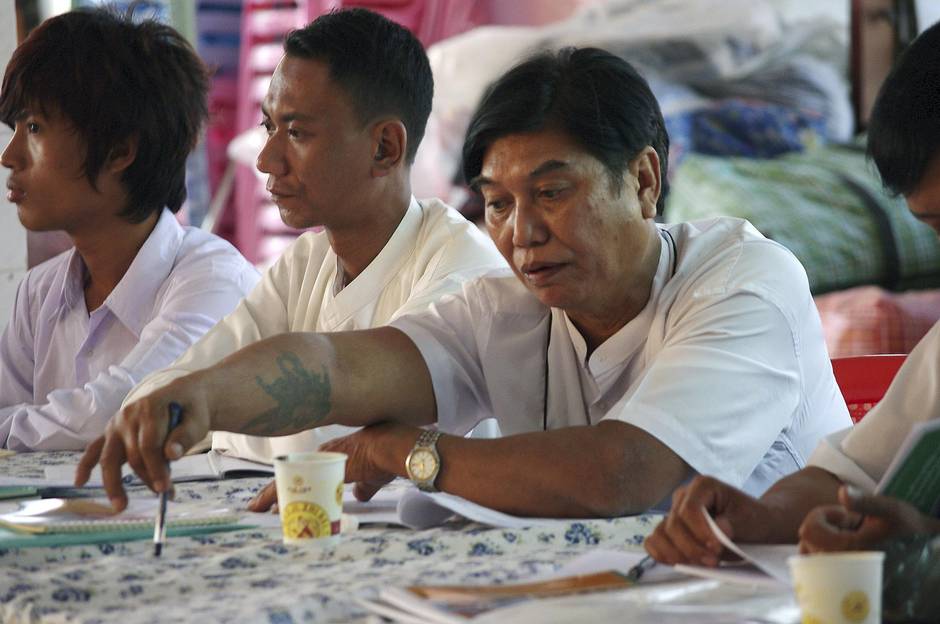 Student Win Myint Awny poses a question during a democracy and governance workshop in Yangon, Myanmar. The workshop was put on by the Open Myanmar Initiative. (Kim Mackrael)

Diplomats in Myanmar came up with three possible focus areas and brought them to Myanmar’s government in the fall of 2014: economic development; support for democratic institutions and governance; and maternal and child health. The initial response was “favourable,” allowing Canada to move ahead with more detailed plans.

Since that time, Ottawa removed maternal and child health as a standalone priority, though Mr. Paradis says the government still expects work in this area.

In the short- and medium- term, Ottawa will look for ways to assist with this year’s election in Myanmar. Canada will also try to support efforts to achieve a ceasefire and help refugees, Mr. Paradis said.

On the economy, Mr. Paradis said the government is looking at ways Canadian aid programming can boost Myanmar’s small and medium enterprises and develop the country’s agriculture and mining industries. Democracy-focused programs like the training session in Rangoon could be broadened, officials say, to include a greater focus on training local media, activists from civil-society organizations and government administrators who are working to implement the promised reforms.

Mr. McDowell said Canada’s experience with federalism means it can present an example of one way Myanmar’s military regime can devolve power to the local level.

“It’s not necessarily a political urge that they want to push power down. But there’s an administrative necessity, that they can’t manage a 52 million person country from a few offices in Naypyidaw,” Mr. McDowell said, referring to the country’s new capital city. “There’s a need for that kind of assistance, helping government restructure and think about a new way of doing things.”

Officials say they are still working out what kind of development work they can offer in Myanmar’s mining and agriculture sectors.

Canadian company Ivanhoe Mines Ltd. pulled out of Myanmar in 2007, amid controversy over its decision to operate in a country ruled by a military junta. After a Chinese company took over the mine, security forces were accused in 2012 of releasing white phosphorus on a group of protesters. Two years later, a woman was killed while protesting at the site.

Canadian officials have held a number of meetings with the Myanmar government on natural-resources management since the embassy opened. Myanmar’s government initially expressed interest in technology, according to one official, but it was also interested in learning how Canada assesses the environmental and social impacts of development.

Myanmar officials “had a clear, though maybe idealized sense that the way things were done in the past hadn’t worked, and communities didn’t benefit,” Mr. McDowell said. He said officials were aware that mining in the country had caused conflict and environmental degradation, and there was a sense from them that a different approach was needed. 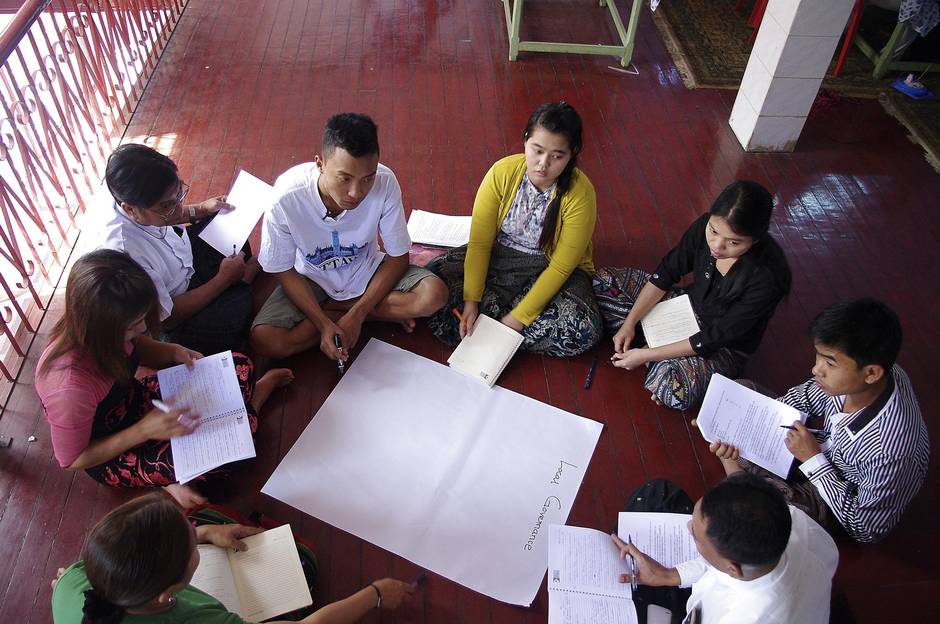 “They think of Canada – a few other countries, but definitely Canada – as one of the ones that they’re thinking of as a place where they perceive things are done better, and that Canada does things better around the world than maybe some of their neighbouring countries.”

When it comes to foreign investment, some citizens of Myanmar said they view Canada – and other Western investors – as preferable to China.

“I like only democratic country investments,” said Win Myint Awny, who attended the Canadian-funded democracy program in Rangoon. “I hope the companies that come in will have programs for corporate social responsibility and the environment.”

Speaking at the launch of the Open Myanmar Initiative training, Mr. McDowell made the case to the small group that Canada and Myanmar share more in common than might initially seem to be the case. For example, both countries have linguistic and religious differences, he said. “We’ve been able to manage our differences and draw strength from [them],” he said. “We don’t have the answers but we welcome you to look to Canada as an example.”

Some students at the workshop expressed concern about the way foreign aid will be used, saying they’ve heard of organizations that spend more money on rent and other administrative expenses than they do on their programming.

Kyi Pyar Chirl Saw, an instructor who presented a day-long lesson on local governance during the training session, said she’s hopeful her country will sustain the reforms it has started.

Sitting on a concrete bench outside the monastery, she said she’s pleased to see donors stepping in. “I am an optimist about my country,” she said.