"She was a warrior to the end. She stood up for justice for her father," the Rev. Al Sharpton said in announcing the death of Garner, 27, at a New York hospital.

Garner's official Twitter account, run by her family and friends since she became ill, asked that she be remembered as a mother, daughter, sister and aunt with a heart "bigger than the world."

In 2014, her father, Eric Garner, who was black, was stopped on Staten Island for selling untaxed cigarettes and died after a white police officer subdued him with a chokehold. A grand jury declined to indict the officer; the city agreed to pay a $6-million civil settlement.

Erica Garner became a voice for police accountability after his death, criticizing Democratic Mayor Bill de Blasio over policing matters. In 2016, she campaigned on behalf of Vermont Senator Bernie Sanders, an independent, for president.

Garner's mother, Esaw Snipes, told The New York Times previously that Garner, who gave birth four months ago, had learned during the pregnancy that she had heart problems.

Snipes said Garner had a heart attack after an asthma episode and was placed in a medically induced coma.

Family devastated no one is being held responsible for Freddie Gray’s death
September 13, 2017 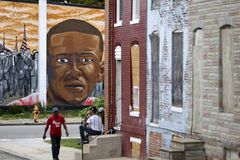 Family of black teen allegedly beaten by officer seeks probe of police forces
August 16, 2017
Charges dropped in Ohio police shooting of unarmed black man
July 24, 2017
Report an error
Due to technical reasons, we have temporarily removed commenting from our articles. We hope to have this fixed soon. Thank you for your patience. If you are looking to give feedback on our new site, please send it along to feedback@globeandmail.com. If you want to write a letter to the editor, please forward to letters@globeandmail.com.
Comments are closed