It's time for Nadia Murad to figure out what comes next.

Ms. Murad, 24, is the United Nations' first Goodwill Ambassador for the Dignity of Survivors of Human Trafficking. She's also a survivor herself: In 2014, she was kidnapped during an Islamic State attack on Sinjar, the northern Iraq region that is the ancestral home of her people, the Yazidis.

The Yazidi faith combines elements of the Abrahamic religions and Zoroastrianism, and has long made them targets – they count themselves the victims of 74 genocidal attacks over the last eight centuries. This last one obliterated the community: of the 400,000 Yazidis estimated to live in the area at the time, only about 1,000 families remain.

Some refugees have been placed internationally, including about 800 in Canada, but most survivors now live hand-to-mouth in camps. That's still a better fate than that met by those murdered and dumped in mass graves, the thousands still missing, or the boys raised to be child soldiers. Ms. Murad was one of thousands of Yazidi women and girls sold as "sabaya," or sex slaves.

In a new memoir, The Last Girl, Ms. Murad recounts enduring sickening humiliation and violence before escaping out of an open window and sneaking into Kurdish-held territory with the help of a poor Sunni Muslim family. These are horrors she has been reliving continually since they first happened as she has travelled the world trying to convince politicians, diplomats and regular people to help the Yazidis.

"This book, that can be a conclusion for telling her story in detail," said Abid Shamdeen, Ms. Murad's translator, during a phone call from New York. "She's thought about taking a little break after this and just slowing down from this work."

Her book comes out this week, just as the IS caliphate appears to be defeated in most of Iraq and Syria. Even so, to consider a life beyond relentless advocacy is a turning point for Ms. Murad. She writes that her drive came both out of a desire to see justice for her people and a sense of hopelessness after shattering loss. Six of her brothers and her mother were murdered. A niece was killed by an IED while trying to escape.

Family members are still unaccounted for and one of Ms. Murad's nephews has been brainwashed into becoming an IS soldier himself. "He said he was happy where he was," Ms. Murad said about the last time he called the family. Unable to imagine happiness again for herself, she became an unceasing advocate for her people's survival.

Her work has had results. Last spring, she testified at the United Nations and in September, the Security Council directed its investigators to collect evidence about crimes against the Yazidi perpetrated by IS, in order to build a case for genocide and war crimes.

But human-rights awards (she has been given the Vaclav Havel and Sakharov prizes, and was nominated for a Nobel) are small recognition of just how brave it was for Ms. Murad to tell her story. Centuries of persecution have made the Yazidis insular. They are a rural, modest people who don't accept converts and consider premarital sex a great shame.

Many victims of sexual violence, including Ms. Murad, were afraid that their forced conversions to Islam and months of rape would make them outcasts from their communities. In fact, their IS captors told them so.

But faced with the erasure of their people, the highest Yazidi religious authorities changed an 800-year tradition of expelling those who had engaged in premarital sex. This unprecedented acceptance came about, in part, because of the intervention of German psychologist Jan Ilhan Kizilhan.

An expert on trauma and transcultural psychotherapy, Dr. Kizilhan has helped resettle and counsel hundreds of Yazidi women, including Ms. Murad. She writes that she found therapy almost unbearable, which Dr. Kizilhan said is common for Middle Eastern women who have experienced rape, especially those Ms. Murad's age or older.

"They need time, six months or even one year, before they are even able to talk about what they faced in IS capitivity," he said. Determined to meet an overwhelming need, Dr. Kizilhan has begun training people in northern Iraq, including six Yazidis, as counsellors.

Children and adolescents have the easiest time healing and adjusting to a new society, he said, while adults have difficulty imagining the future when the present is still so painful. About 3,000 Yazidis are still thought to be in IS custody.

"In psychology, it's very important to say the past is the past, now we're living in the present and we can plan the future," Dr. Kizilhan said. "The Yazidi future is still not very clear."

Ms. Murad writes of her determination to return to her home town of Kocho, but admits now that it's increasingly unlikely. The place is destroyed, with barely any services. And even without IS, northern Iraq is still highly contested territory, the centre of the Kurdish desire for independence.

"The housing conditions are not realistic," Ms. Murad said. "It's difficult for people to go back." Dr. Kizilhan has been trying to convince her to stay in one place and commit to long-term therapy – for now, she plans to spend December in Germany, where two of her siblings live permanently.

After that, she has no solid plans. Perhaps school, which was always intermittent in her life, first because her family's farm often demanded her attention, followed by the war and her work.

"Maybe when I'm done with the book, maybe I'll focus on something like that," she said. "Something for my own future." 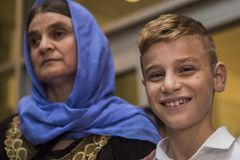 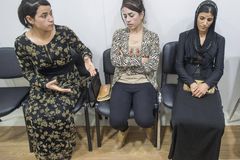 Canada to give asylum to 1,200 primarily Yazidi refugees by end of 2017
April 14, 2017
Follow Denise Balkissoon on Twitter @Balkissoon
Report an error Editorial code of conduct
Due to technical reasons, we have temporarily removed commenting from our articles. We hope to have this fixed soon. Thank you for your patience. If you are looking to give feedback on our new site, please send it along to feedback@globeandmail.com. If you want to write a letter to the editor, please forward to letters@globeandmail.com.
Comments