Afghan President Ashraf Ghani has appointed a team of investigators to look into the circumstances leading to the Taliban's brief capture of the northern city of Kunduz as well as a U.S. air strike that destroyed a hospital and killed at least 22 people there, his office said Saturday.

The five-man delegation appointed by presidential decree will leave soon for Kunduz to conduct a province-wide probe into how the insurgents were able to overrun the city on Sept. 28 and hold it for three days before government troops launched a counter offensive, Ghani's office said.

Part of the team's mandate would include looking into the Oct. 3 air strike on a trauma centre run by the international charity Doctors Without Borders. The team would be led by the former head of the national intelligence agency, Amrullah Saleh, and would report to the president.

The "fact-finding team" will deliver a "comprehensive report so that we know what happened in Kunduz, what kind of reforms should be brought and what are the lessons learned for the future," the president was quoted as saying.

Ten days after government troops entered Kunduz, they are still fighting to clear out pockets of Taliban insurgents, officials and residents said.

Sarwar Hussaini, spokesman for the provincial police chief, said three areas of the city had been retaken overnight, though a gas station in Seh Darak was hit by a rocket and destroyed. Hussaini said he did not know which side was responsible.

Kunduz resident Abdullah said that people were still leaving the city for safety. He said he had seen grocers emptying their shops of food to take home, fearing scarcities. He would only give his first name because of security concerns.

The World Food Program said it was feeding thousands of people who had left Kunduz and were now living in camps in other cities in the north, and that "additional wheat is being milled in anticipation of increased needs in the coming days."

Food and water were still not getting through in adequate quantities, and the city remained without electricity, residents said.

"The whole city is empty of people," Abdullah said. "Residents are still not feeling safe."

Representatives of Doctors Without Borders met with Ghani and his national security adviser Mohammad Hanif Atmar on Friday, his office said in a statement.

Ghani told them he had ordered Afghan security forces to ensure the protection of humanitarian organizations. The statement quoted him as saying investigations were needed "so that we know what happened in the incident, how information was collected, and how the incident happened based on that information."

Doctors Without Borders has called for an independent probe of the incident by the Swiss-based International Humanitarian Fact-Finding Commission – which is made up of diplomats, legal experts, doctors and some former military officials from nine European countries, including Britain and Russia. It was created after the Gulf War in 1991, and has never deployed a fact-finding mission.

Doctors Without Borders – a Nobel Peace Prize-winning organization that provides medical aid in conflict zones – is awaiting responses to letters sent Tuesday to 76 countries that signed the additional protocol to the Geneva Conventions, asking to mobilize the 15-member commission.

For the IHFFC to be mobilized, a single country would have to call for the fact-finding mission, and the U.S. and Afghanistan – which are not signatories – must also give their consent.

The air strike was requested by Afghan ground forces, according to the commander of U.S. forces in Afghanistan, Gen. John F. Campbell, but mistakenly hit the hospital.

The bombing continued for about an hour and destroyed the hospital's main building. President Barack Obama apologized and the U.S. military is investigating. The hospital has been abandoned.

Doctors Without Borders said that 12 staff members and 10 patients, all of them Afghans, were killed. Many more are still missing, though all foreign staff have been accounted for.

In Washington, the Pentagon said it would offer "condolence payments" to civilians injured in the air strike and the families of those killed as well as provide funds for repairing the hospital. The compensation will be handled through the already existing Commanders' Emergency Response Program in Afghanistan, and if necessary additional authority will be sought from Congress, Pentagon Press Secretary Peter Cook said in a statement issued Saturday.

"The Department of Defence believes it is important to address the consequences of the tragic incident at the Doctors Without Borders hospital," Cook said.

Opinion
Afghan hospital bombing: An illegal attack, not a ‘mistake’ 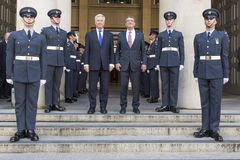