After a debate that divided the continent, African governments have decided to remain in the International Criminal Court, but they are demanding that the court suspend the prosecution of any African head of state.

The demand by the African Union would favour the presidents of Kenya and Sudan, both of whom are facing charges in The Hague for crimes against humanity for their alleged role in orchestrating mass atrocities in their countries.

The AU is effectively calling for a boycott of the trial of Kenyan president Uhuru Kenyatta, who is scheduled to appear at the International Criminal Court in The Hague on Nov. 12.

Many commentators across Africa immediately criticized the AU's decision, saying it would only encourage politicians to hang onto power by any means necessary to evade justice.

The first beneficiaries of the AU decision could be Mr. Kenyatta and his deputy president, William Ruto, whose trial on similar charges is already underway. It is now unclear whether Mr. Kenyatta will show up at his trial next month, despite earlier promises to co-operate.

At an emergency summit at its headquarters in Addis Ababa on Saturday to discuss the ICC issue, the AU announced that the Kenyan president should not appear at his trial if the ICC refuses to accept the request for a deferral of his trial until after he leaves office.

Many African leaders are angry at the 11-year-old international court, calling it "racist" for failing to file charges against Western leaders or Western allies while prosecuting only African suspects so far.

"The ICC has been reduced into a painfully farcical pantomime, a travesty that adds insult to the injury of victims," Mr. Kenyatta said in a speech to the AU summit on Saturday.

"It stopped being the home of justice the day it became the toy of declining imperial powers," he said.

Everyone but Africa is "exempt from accountability" at the ICC, the Kenyan president said. "We would love nothing more than to have an international forum for justice and accountability, but what choice do we have when we get only bias and race-hunting at the ICC?"

Ethiopian foreign minister Tedros Adhanom Ghebreyesus made a similar demand. "Sitting heads of state and government should not be prosecuted while in office," he said. "We have resolved to speak with one voice to make sure that our concerns are heard loud and clear."

He said the ICC was a "political instrument" that was "unfair and unjust" and "condescending" towards Africa.

But many Africans, including human-rights leaders, have disagreed with Mr. Kenyatta and his supporters. Retired archbishop Desmond Tutu and former UN secretary-general Kofi Annan are among those who have strongly opposed the idea of an African withdrawal from the ICC. Such a pullout would be a "badge of shame" for the AU, Mr. Annan said.

Mr. Tutu, the famed South African anti-apartheid leader, said those who seek to evade the international court are "effectively looking for a license to kill, main and oppress their own people without consequence."

The attack on the ICC by powerful leaders accused of crimes is similar to the vilification of the Nuremberg court by Nazi leaders who went on trial after the Second World War, he said.

He noted that the ICC charges against African leaders were largely a result of requests by African governments themselves. Africans are heavily represented in the ICC's decision-making bodies, he said, noting that its chief prosecutor and five of its 18 judges are African.

Of the 54 African states, 34 have formally joined the ICC since its creation in 2002, but the Kenyan parliament voted last month to withdraw from the court. Several other African governments have supported the call since then. 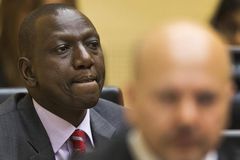