Weakened by chronic infighting and the demise of its long-time financier Moammar Gadhafi, the African Union is turning instead to the embrace of its richest new ally: China.

Col. Gadhafi, the Libyan dictator who was overthrown and killed last year, had been the biggest donor to Africa's political alliance for years. But at its latest summit this weekend, the AU made it clear that Beijing is its new Libya.

The 54-nation African organization is holding its summit in its gleaming new $200-million marble-and-glass headquarters, financed and built by the Chinese government on the site of a former maximum-security prison in Addis Ababa.

It's the tallest building in the country, and all of it – even the furniture in its spectacular 2500-seat Grand Hall – was supplied by China as a gift to the world's poorest continent.

The honoured guest and keynote speaker at the African summit is a senior Chinese official, Jia Qinglin, who announced on Sunday that China will provide $95-million in funds to the AU over the next three years – a huge boost to an organization whose annual budget is about $270-million.

"The people of China and Africa are good friends, good partners and good brothers," Mr. Jia told the summit. "Our friendship is as solid as the towering Mount Kilimanjaro and as vibrant as the Yangtze River and the Yellow River."

During the Gadhafi years, many African nations came to depend heavily on gifts and investments from Libya's oil wealth. Libya provided 15 per cent of the AU's membership revenue, and it paid the entire dues of many smaller and poorer African nations. It also spent billions of dollars on infrastructure programs and other investments across Africa to help cultivate support for Col. Gadhafi's vision of a United States of Africa.

Now, however, that vision is dead, and Africa is turning instead to China. At the summit, African leaders were quick to praise China as a model for their continent.

Ethiopian Prime Minister Meles Zenawi, speaking at the unveiling of the Chinese-built headquarters, said the recent rapid growth of many African nations was a result of their adoption of Chinese-style economic policies.

"China – its amazing re-emergence and its commitments for a win-win partnership with Africa – is one of the reasons for the beginning of the African renaissance," Mr. Meles said.

Signs of the Chinese largesse, including the construction of roads, hospitals and soccer stadiums, are increasingly visible across Africa. China's trade with Africa has soared by 13-fold in the past decade, reaching $150-billion last year, surpassing any other country's trade with Africa.

China's investment in Africa has similarly skyrocketed from $490-million to nearly $15-billion over the past eight years. And China is even contributing $4.5 million to an AU peacekeeping force in Somalia.

Perhaps most important, China attaches no strings to its aid to Africa, making no burdensome Western-style demands for democracy or anti-corruption campaigns. Its aid, however, helps Beijing win access to the African oil and minerals that are increasingly vital for fuelling China's economic growth.

The Chinese money and resources will be crucial to the AU as it struggles to overcome a year of political turmoil and failed diplomacy during the civil wars in Libya and Ivory Coast. The AU has been sharply criticized for failing to present a united front against the Western military action in Libya and for exposing its own divisions during a futile effort to negotiate a solution to the Ivory Coast conflict.

The rising discontent is expressing itself in a fierce battle for the top job at the AU Commission. The current chairman, Jean Ping of Gabon, faces a strong challenge from South Africa's candidate, former foreign minister Nkosazana Dlamini-Zuma, the ex-wife of president Jacob Zuma, in a vote scheduled for Monday.

The challenge is a result of South Africa's unhappiness with the AU's weakness and ineffectiveness, reports say.

Meanwhile, the AU is being urged to abandon its hostility to gay rights. The United Nations secretary-general, Ban Ki-moon, told the AU in an address on Sunday that the widespread discrimination against gays has been "ignored or even sanctioned by many states for too long." He added that gays are treated "second-class citizens or even criminals." Homosexuality is illegal in most African countries, and some governments – including Uganda – are toughening their laws and even threatening the death penalty for some homosexual acts. 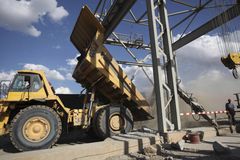