Brazilians are stepping cautiously into Monday braced for what the week may bring, after an unprecedented eight days of peaceful but unrelenting political upheaval. Impeachment proceedings against President Dilma Rousseff will advance today, as will the government's legal efforts to get former president Luiz Inacio Lula da Silva into her cabinet. And there are growing rumours here that the prosecution team spearheading a giant anti-corruption investigation may move to arrest Mr. da Silva – an act that no longer seems implausible as this all-bets-are-off crisis unfolds.

Late on Friday night, a supreme court justice ruled that Mr. da Silva could not take up the post as Ms. Rousseff's chief of staff (to which he was sworn in on Thursday), because, he said, the appointment had been made in a clear attempt to help the former president dodge a criminal procedure. Under Brazilian law, cabinet ministers can be prosecuted only before the Supreme Federal Tribunal, an extremely slow and complex process.

"The goal of the falsity is clear: to prevent the carrying out of an arrest order," against Mr. da Silva that is under consideration by a lower court, Justice Gilmar Mendes wrote in his ruling. "It would be possible to conclude that the appointment and subsequent swearing-in, in the circumstances described, could constitute fraud of the constitution."

He also sent the case back down to a federal court, effectively lifting the shield of protection on Mr. da Silva, who is under investigation in the Lava Jato graft scandal. He denies all wrongdoing and said he is joining cabinet only in an effort to help Ms. Rousseff lead the country out of its political and economic crisis.

On Saturday, the government asked the court to take the unusual step of superseding Justice Mendes's decision, by suspending it, and all other court decisions trying to block Mr. da Silva becoming a minister, until the entire supreme court can sit to consider that matter. Justice Mendes had already criticized the idea that Mr. da Silva might join cabinet, in a statement, before the appointment was made and before he was given the case to rule on.

Because the Easter holiday falls this week, the court's next full meeting was not scheduled until March 30.

In the Friday decision, Justice Mendes ruled that Mr. da Silva's case should be returned to the federal court of Judge Sergio Moro, who has spearheaded the Lava Jato investigation and who last week permitted the release of hours of Mr. da Silva's taped phone calls, including some with Ms. Rousseff.

On Sunday, Mr. da Silva's personal lawyers filed a separate habeas corpus petition to keep a criminal investigation of him, for money-laundering and misrepresentation of assets in connection with Lava Jato, at the supreme court level. The former president has denied any wrongdoing.

With his cabinet protection lifted, many observers are openly suspecting that the next step may be an attempt to arrest the 70-year-old former president. About 150 of his supporters are keeping vigil in front of his Sao Paulo home; they also say Judge Moro is on a politically motivated bid to take down Ms. Rousseff and her allies.

The supreme court ruling came after Mr. da Silva's cabinet status shifted at least four times since his swearing-in on Friday, with judges granting temporary injunctions and higher courts overturning them at a pace that seemed frenzied. There are at least 50 injunctions before courts now.

The legal back-and forth reached such a pitch that it inspired a bleakly funny website, lulaeministro.com, or "Is Lula a minister?" The site shows only the former president's face and the words, "At this moment, No." (Or yes, depending.)

On Monday evening the lower house of Congress will hold the second session into an impeachment process against Ms. Rousseff. (Separate from the Lava Jato investigation, this impeachment bid is related to the allegation that she ordered the use of federal bank funds to cover budget shortfalls.)

On Sunday a new poll showed 68 per cent of Brazilians want to see Congress impeach her, while 65 per cent said they thought she should resign. The poll by the respected Datafolha agency was conducted on March 17 and 18. Just 10 per cent of those surveyed rated Ms. Rousseff's government as good or excellent, with 69 per cent calling it bad or terrible. Public support for Mr. da Silva, who had a near-90-per-cent approval rating when he left office at the end of 2010, has dropped considerably, with 57 per cent of Brazilians now saying they disapprove of him.

But as this scandal expands continuously to engulf politicians and parties across the spectrum, the poll also showed the degree of Brazilians' total frustration with the establishment. Should Ms. Rousseff be impeached, she would theoretically be replaced by Vice-President Michel Temer – but only 16 per cent of those surveyed said they thought he would lead a good or great government; less than a third said he would be any better than Ms. Rousseff. Thirty-five per cent say Mr. da Silva was the best president Brazil ever had, more than twice the rating of the next-closest candidate.

Opinion
Two South American leaders in a race to the bottom
March 18, 2016 Brazilians fear scandal probe may be undermined by release of tapped calls
March 18, 2016 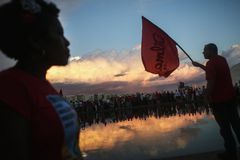