The Canadian man who once helped basketball hall of famer Dennis Rodman get into North Korea now wants to bring former NHL players into the isolated country to play hockey.

More than a decade in the making, the 2016 Pyongyang International Friendship Ice Hockey Exhibition will bring a group of professional and amateur players to Pyongyang in March for a rare international match on North Korean soil.

Michael Spavor, an Albertan who has made a career out of connecting the secluded country with the outside world, won't say which NHL stars are coming – only that some players have shown interest and that the final game will be against the North Korean men's national team.

The tournament comes at a time of increased tension on the Korean Peninsula, as the United States lobbies China to support stricter sanctions for North Korea after it tested a weapon it described as a more powerful nuclear bomb. International condemnation has also been mounting against the country, with the United Nations General Assembly voting in December to decry its "systematic, widespread and gross violations of human rights."

Mr. Spavor calls the match an opportunity to use "hockey as a medium to develop friendship, trust and genuine cultural exchange" – at least for those willing to pay. The options range from a $3,200 short trip to a nine-day $8,900 VIP package with first-class airfare from Beijing on North Korea's Air Koryo and an excursion to the country's "mysteriously fragrant" mountains.

For the Canadians who go, it will be a chance to reclaim some of the Maple Leaf's lost glory in North Korea.

Foreign hockey teams have visited the country at least three times in the past eight years – two of them clubs stacked with Canadian expats living in Beijing and Tokyo, the third a Swiss team that brought along a Canadian player.

Their record: five losses and one win.

Only the Swiss club posted a victory. In a two-game set in 2012, they lost the first in part over worries about "how tolerant they were with us scoring many goals," said Curtis Dracz, the sole Canadian. But after a discussion with their hosts, the visiting players determined they were, in fact, allowed – and even expected – to win.

"The second game, we went with our full force and played full contact and we beat them," Mr. Dracz said.

Russian and Chinese workers introduced hockey to North Korea in the 1950s. Today the country counts more than 1,500 hockey players, more per capita than its southern neighbour. It has a dozen outdoor rinks and three indoor sheets.

The team lost only one game in the round robin and has since risen to Division IIB, ranked 42nd in the world, while the women play in Division IIA and are ranked 27th.

Mr. Spavor first encountered North Korean hockey in 2005, while living in the country for six months as a teacher. A friend noticed a poster advertising a tournament. The games were free, and as Mr. Spavor sat in the stands he felt like he had stumbled on buried treasure.

"How many people know there's an active and quite professional and skilled hockey program in the DPRK?" he said, using the name the country calls itself, the Democratic People's Republic of Korea.

He got to thinking about arranging a friendly hockey match, and the idea never left him as he built a business connecting the country with the outside world. In 2013, he smoothed the way for Mr. Rodman's second "basketball diplomacy tour" to Pyongyang.

Being Canadian, it was Mr. Spavor local officials turned to with the idea of setting up a hockey exchange.

Final plans for the tournament are being made even as Hyeon Soo Lim, a Canadian pastor, remains imprisoned in North Korea, serving a life sentence with hard labour. Rev. Lim was detained early last year.

Mr. Spavor said it would be "inappropriate" for him to comment on Rev. Lim or Otto Frederick Warmbier, an American student detained this month. "Travel to the DPRK does involve certain sensitivities, and we provide a thorough safety briefing addressing local rules before entering the country," Mr. Spavor said in a statement.

For years, sports have formed one of the few bridges to the isolated country, which has permitted foreigners to enter for bike tours, frisbee and golf tournaments and a series of friendly soccer, cricket, volleyball and basketball matches. An annual marathon is now in its third year, and some 500 people have signed up for the April run. Foreign countries have been part of broader athletic exchanges, too: North Korean figure skaters have trained in Canada.

Between 5,000 and 7,000 Western tourists now visit North Korea every year.

Mr. Spavor has timed the Pyongyang hockey tournament to take place just before the IIHF World Championship in Mexico, to help the North Korean team prepare.

"We are bringing over some trainers to do some training," he said. "We're interested in anyone who wants to support or collaborate or volunteer for this."

At least some of the March games will be played at the Pyongyang Ice Rink, a 6,000-seat arena that resembles a giant concrete tepee. An outdoor match may also be possible – a kind of North Korean winter classic – but that and other details remain to be finalized, including the number of foreign and local teams and the tournament format.

Mr. Spavor is working to pair the tournament with a charitable cause and has issued a call for donations of specialized athletic equipment for people with disabilities or money to buy it from Chinese suppliers. He is looking for more players, too.

"I hope this has a mass appeal to Canadians," he said.

Besides, he says, after weeks of tension following North Korea's Jan. 6 nuclear test, "one might argue this is a particularly good time to build some relationships and trust."

Still, not everyone is interested in going – including Mr. Dracz.

He loved playing hockey in Pyongyang, but the trip inspired an interest in North Korea that led him to read more about the country.

"I think it opened my eyes a lot," he said. "Seeing their nation and what they do and I guess the negative attributes that they bring, it's something I'm not quite one to support."

Amid outrage, should Canada try to bridge the gap with North Korea?
Subscriber content
January 11, 2016 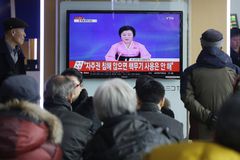