The hearses left one at a time, to whispered prayers and sobs of grief from a Jewish community that feels under siege. The next and final stop for the four bodies – all victims of last week's attack on a kosher grocery store on the eastern edge of Paris – will be burial on the Mount of Olives in Jerusalem.

Walking among the dense crowd of mourners Monday outside a funeral home near the right bank of the River Seine, Rabbi Abraham Toledano said he believed the time had come for other French Jews to do the same and leave France for new, safer lives in Israel.

"This is not the first incident. In the past three years, eight people have been killed because they were Jews," Mr. Toledano said between the second and third funerals of another grim day in Paris. In 2012, four people – three children and a rabbi – were shot in an attack on a Jewish school in the southern city of Toulouse. "People are very worried. They feel there's no security."

The 55-year-old rabbi, who heads a synagogue on the southern outskirts of the French capital, said he was personally thinking of moving to Israel and was advising other French Jews to do the same. "It's very sad. I have lived here for 40 years, but I now think it's better to leave."

A fresh exodus of French Jews would compound the tragedy of last week's violence in Paris, which began with a deadly assault on the offices of the Charlie Hebdo newspaper on Wednesday and took an anti-Semitic turn two days later when a third gunman took hostages at the Hyper Cacher grocery in the neighbourhood of Porte de Vincennes, killing four before he was shot dead by police. That night, the Grand Synagogue of Paris shut its doors for shabbat prayers for the first time since the Second World War.

In a video discovered after he was shot dead by police, Amedy Coulibaly, the Hyper Cacher attacker, claimed he had co-ordinated his actions with the two Charlie Hebdo gunmen. He said he was a follower of the so-called Islamic State that controls swaths of Syria and Iraq.

Following the attack on Hyper Cacher, Roger Cukierman, the head of an umbrella group of France's Jewish organizations, said he "wasn't surprised, because one of the targets of fanatical Islam is the Jewish community." Israeli media reported that Mr. Cukierman's organization paid for the four victims to be buried in Jerusalem.

The victims, named by the French Board of Jewish Deputies, were: Yohan Cohen, 22, who worked at the supermarket; Yoav Hattab, a 21-year-old student whose father was a rabbi in Tunis; François-Michel Saada, 63, a former executive whose children lived in Israel; Philippe Braham, 45, an IT consultant whose children went to a Jewish school in the Parisian suburb of Montrouge where Mr. Coulibaly is suspected of killing a policewoman at a traffic stop on Thursday.

While France still has the largest Jewish population in Europe, at an estimated 550,000, the number of French Jews making aliyah, or moving to Israel, rose to a record 7,000 people last year. The increase was seen as linked to both the Toulouse killings and to protests in Paris last summer against the Israeli army's actions in the Gaza Strip that boiled over into attacks on a synagogue and several Jewish-owned stores.

Others French Jews say they are concerned by the rise of the National Front, a far-right group whose founder, Jean-Marie Le Pen, once referred to the Holocaust as "a mere detail of history." The party, which won a quarter of the vote in European elections last year, has made an effort to distance itself from such statements since coming under the leadership of Mr. Le Pen's daughter, Marine.

The outflow of French Jews is expected to again pick up speed in the wake of last week's violence. Israeli Prime Minister Benjamin Netanyahu, who was cheered during a Monday visit to Hyper Cacher, said that any Jews who want to leave France would be "received with open arms" in Israel.

Mr. Netanyahu's invitation was heavily criticized by Rabbi Menachem Margolin, the head of the European Jewish Association. The rabbi said such talk "severely weakens and damages the Jewish communities that have the right to live securely wherever they are."

The French government moved swiftly on Monday to show that it was serious about protecting the country's Jews from possible follow-up attacks, announcing that 10,000 police and soldiers would be deployed to guard "sensitive sites" around the country, including 717 Jewish schools.

Mosques will also get extra protection after dozens of threats and revenge attacks – including hate graffiti, drive-by shootings and minor explosions – in the days since the Charlie Hebdo attack.

"Synagogues, Jewish schools, but also mosques will be protected because in the past few days, there have been a number of attacks against mosques," said Prime Minister Manuel Valls. He said the Hyper Cacher attacker, Mr. Coulibaly, "probably" had accomplices who aided him and were still at large. "The hunt will go on."

There was palpable tension Monday in Paris's historic Jewish quarter of Le Marais. A pair of soldiers brandishing automatic weapons were stationed outside the Yad Mordechai yeshiva, while another duo patrolled the nearby Rue des Rosiers shopping street.

"We're used to it. Every time there's an incident, the atmosphere is the same. Police everywhere. A feeling of paranoia," said Jasmine, a 32-year-old employee at a popular falafel stand on Rue des Rosiers. She asked that her family name be withheld because she didn't feel comfortable speaking on behalf of the entire community.

She said many of the restaurant's customers had been unnerved by the attack on the kosher grocery and that she had overheard several discussing leaving France amid what she called "advancing anti-Semitism."

But Shlomo Katz, a rabbinical scholar at the Yad Mordechai, said it was important that the community didn't panic. "There's a feeling of fear and anxiety, because people don't know what the future will look like … but we have to keep our sangfroid, to rise above these events," he said, speaking shortly after Interior Minister Bernard Cazeneuve visited the school.

Outside the funeral home near the Seine, a family friend of one of the Hyper Cacher victims said he understood the impulse to leave, but hoped most of France's Jewish community would stand its ground.

"There are a lot who have already left, and now more will think about aliyah to Israel, or leaving to go to the United States or Canada," said Yitzhak Slama, the 58-year-old director of a clothing company. But Mr. Slama said he planned to stay in France, a country he said was built on "exceptional" values.

Jews leaving France, he said, would suit the aims of those who attacked Hyper Cacher. "I don't want to let them win."

French police say up to six terror cell members may still be at large
January 12, 2015 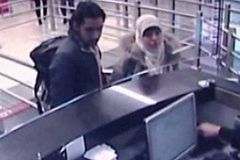 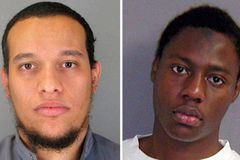 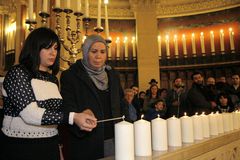 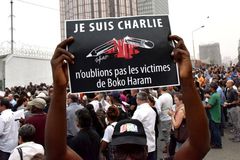 ‘We will show we can continue,’ says surviving Charlie Hebdo cartoonist
January 11, 2015 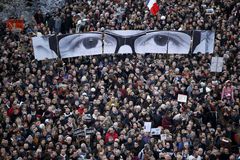