It is a method of killing as old as the act of killing itself. Employed by the ancient Greeks and Romans, referenced in the Koran and the Bible. A staple of the Crusades and medieval Europe, and practised in some parts of that continent as recently as the Second World War. A method still preferred by one of the most prolific execution states in the world.

And, more recently, a grim tool of perverse propaganda.

Of the many grotesque visuals employed by the terrorist organization known as the Islamic State during its ongoing campaign of intimidation and recruitment, none has provoked as much revulsion as the group's use of beheading. On Thursday, Australian police mounted a counterterrorism raid after learning that IS was believed to be planning to behead a random person in the country as a demonstration of power. The raid came on the same day IS released video of a hostage, British journalist John Cantlie, in which Mr. Cantlie is not physically harmed but is made to warn the citizens of his country and the United States against engaging in a military conflict against IS.

Disseminated with stunning speed throughout social-media accounts, the IS videos have become the group's signature statement – the latest bloody chapter in the long cultural history of death by decapitation.

"Beheading is not new, and has been used historically by all sorts of groups," said Max Abrahms, an assistant professor of public policy at Northeastern University. But in the case of Islamic State, the act of publicized beheading serves a clear purpose. "The idea is to seem like the most fanatical group in order to attract new members, particularly from other terrorist organizations. They want this broadcast around the world, so people come to recognize [IS] as the biggest, baddest group."

In the past two months, IS has released videos showing the execution of at least three Western civilians: U.S. journalists James Foley and Steven Sotloff, and British aid worker David Haines. In each case, the group attempted to frame the killings as a kind of payback for Western aggression against Muslims.

But the act of beheading itself far predates not only the Islamic State, but most any state. The term "capital punishment" finds its origin in the Latin word caput, or head.

Ironically, the method of killing now employed as a form of terrorism was for centuries considered an honourable way to die, reserved for noblemen in many parts of Europe. In addition to the perceived privilege of dying by the sword – a warrior's death – beheading was also seen as a more humane method of execution than the often prolonged and painful practice of hanging. Indeed, it was out of a desire to see executions become more painless that 18th-century French physician Joseph-Ignace Guillotin advocated the use of the beheading device that, while not his invention, came to bear his name.

In times of war, beheading has for centuries featured as a means not only of instilling terror in the enemy, but of trophy-gathering. From the ancient Assyrians to the Crusaders to the Ottomans, groups have employed the practice, often on a massive scale. Many more have collected other body parts, such as scalps or ears, but the head in its entirety leaves no uncertainty about the identity or fate of the victim.

At the same time, groups such as IS have sought to eliminate any semblance of quick or painless beheading. Instead of a single powerful blow with a sword, IS members use a short knife that requires a prolonged sawing motion.

Yet the IS videos are somewhat more tame than many of the beheading videos released by predecessor terror groups, such as al-Qaeda in Iraq. In those showing the execution of Western hostages made public by IS in recent months, the screen fades to black just as the killer takes a knife to the captive's throat. The gruesome act of beheading itself is never shown in its entirety – in stark contrast to videos from the previous decade, in which the whole act is shown.

"They don't show the ritual itself … which tells me that these particular [videos], they want them to go out more, they want them to be published," said Dawn Perlmutter, director of the Symbol and Ritual Intelligence research group, which studies ritualistic and religious violence. "It's more about having the West see them."

Still, in the West and virtually everywhere else, the primary reaction to the IS videos has been revulsion. Many of the reasons are obvious – the sheer brutality, the civilian victims, the degrading propaganda statements the victims are forced to read before their deaths.

But beheading also entails a visual finality that obliterates any euphemism used to blunt the full emotional force of death. In presenting such imagery with a perverse sense of pride, IS has ensured that a group made up in large part of Western-raised twentysomethings is almost universally condemned as barbaric and medieval.

Visually, the IS beheading videos rely on many of the same cues as those of other Islamist terrorist organizations. For example, the Western hostages almost always wear orange jumpsuits, an obvious allusion to the prisoners in the U.S. detention centre in Guantanamo Bay. Each video ends with the severed head placed upon the back of the body – a hallmark of earlier al-Qaeda in Iraq videos.

Beyond the videos, beheading appears to be based on the extremist IS interpretation of Islamic law – one that seeks to return to an idealized, fundamentalist state of early Islam, rooted in the terror group's interpretation of the Koran and words and deeds of the prophet Mohammed.

Perhaps the most direct reference to beheading in the Koran can be found in relation to the Battle of Badr, a major military engagement in the year 624 that proved a turning point for Islam and its prophet. In one Surah, or chapter, of the Koran, titled Al Anfal, the Lord is said to have commanded the angels to strike the disbelievers "at their necks and at every fingertip."

Some Muslim scholars interpret the command to mean that the enemy should be struck at the neck because it is an area rarely protected by armour, or because it is likely to result in a quick death. Others have essentially taken the verse as a literal and wide-ranging directive.

The only nation that still continually employs beheading as its primary method of execution is Saudi Arabia – one of the world's most prolific execution states. The death penalty is prescribed for a variety of crimes, from murder to sodomy and witchcraft.

As the U.S.-led campaign against IS intensifies, the prospect of more beheadings looms. But even among those who would nominally support the terror group, the barrage of such violence may eventually begin to serve the opposite of its intended purpose.

"One of the major ways terror groups end isn't by taking out the leadership or imprisoning their membership, but because of overreach, because they go too far," Prof. Abrahms said. "These beheadings are going to work against them in the long term." 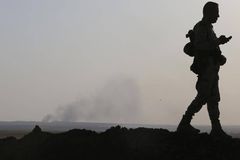