For New Yorkers waking up Monday morning, the tabloid revelations were like something out of a bad dream. Surely Anthony Weiner's private parts weren't making headlines again?

Yet there it was on the front page of the New York Post: a crotch-shot selfie taken by the former U.S. congressman and sent to a woman across the country. Only this time, his young son could be seen curled up next to him.

The image marks the third episode in a scandal that has become grimly familiar: Mr. Weiner sends sexually explicit photos and messages to women he meets online, believing the exchanges to be private, only to see them revealed later to the public.

Such behaviour first emerged in 2011 and forced him to resign from Congress. The second time, in 2013, it torpedoed his bid to become mayor of New York. Now, it is likely to end Mr. Wiener's marriage.

His wife, Huma Abedin, a senior aide to Democratic presidential candidate Hillary Clinton, said Monday in a statement that she was separating from Mr. Weiner.

The decision came "after long and painful consideration," Ms. Abedin said. "Anthony and I remain devoted to doing what is best for our son, who is the light of our life."

The latest sexting by Mr. Weiner, 51, involved a "40-something divorcee" who supports Donald Trump, the Post reported. The correspondence took place from January, 2015, until earlier this month. Mr. Weiner sent the woman at least a dozen selfies, most of them shirtless, the paper said, and "frequently steered the conversation toward sex."

In the middle of the night about a year ago, he was discussing massage parlours with the woman when he abruptly changed the topic, the paper said. "Someone just climbed into my bed," Mr. Weiner wrote. "Really?" she responded. He then sent the image of himself wearing only white Jockey underwear with his son next to him. "You do realize you can see you[r] Weiner in that pic??" the woman responded.

A political junkie with a zeal for partisan warfare, Mr. Weiner had been experiencing a rehabilitation of sorts. He wrote for several publications, appeared as a guest on late-night talk shows and revelled in insulting Mr. Trump on Twitter. (By Monday, his account had disappeared from the social-media site). A documentary released in May offered an excruciating behind-the-scenes look at Mr. Weiner's 2013 mayoral campaign as it was beset by scandal.

In an interview with the New York Times published earlier this month, Mr. Weiner sidestepped a question about whether he was still engaged in sexting. "I'm not going to go down the path of talking about all that," he said.

The fact that Mr. Weiner continued to engage in the same behaviour that wrecked his career and jeopardized his marriage left many observers dumbfounded. "It's an unravelling of a human being in front of your eyes," said George Arzt, a political consultant and spokesman for former New York mayor Ed Koch who knows Mr. Wiener. "My heart goes out to Huma."

Ms. Abedin, 40, has worked for Ms. Clinton for much of her life and is one of the presidential nominee's closest aides. A glamorous figure never far from Ms. Clinton's side, Ms. Abedin was the subject of a profile in the latest issue of Vogue. In it, she discusses her hectic schedule on the presidential campaign, something made possible by Mr. Weiner's willingness "to be, essentially, a full-time dad."

When the latest revelations emerged, Ms. Abedin was with Ms. Clinton in Long Island, N.Y., for a fundraiser. Ms. Abedin was unaware of the sexting photo involving her son until Sunday night, the New York Times reported. The couple's separation will reduce a source of ongoing embarrassment for Ms. Clinton's campaign.

Indeed, Mr. Trump wasted no time in turning the couple's marital troubles into a line of attack. Ms. Clinton was "careless and negligent" in allowing "Mr. Weiner to have such close proximity to highly classified information," he said in a statement.

Mr. Trump asserted that Ms. Abedin was "very wise" to leave Mr. Weiner. "I know Anthony Weiner well, and she will be far better off without him." 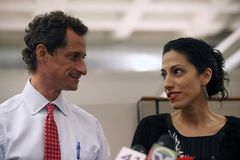 Opinion
Scandals are part of the Clinton package
August 25, 2016

Film Review
Weiner is a fascinating portrait of a political car crash unfolding in slo-mo
July 1, 2016 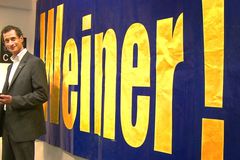