Tucked in a corner of old industrial Lahore – Pakistan's second-largest city of 10 million and the capital of Punjab province – is the Christian neighbourhood of Joseph Colony, home to more than 100 families and the latest example of the country's ongoing struggle with blasphemy laws.

In early March, a mob protesting against an alleged incident of blasphemy by a Christian resident of Joseph Colony started rampaging through the area's narrow footpaths and setting homes on fire. The police had already evacuated the neighbourhood but did nothing to stop the mob from destroying property.

Pakistan has witnessed historic elections – the first-ever civilian government completing a full five-year term and transferring power peacefully. But its anti-blasphemy laws continue to contribute to a tinderbox environment in which minorities bear the brunt of a culture quick to explode over perceived insults to Islam.

"Whenever there is talk of amending the law … those people who are suggesting the amendment are accused of blasphemy," said Ahmed Bilal Mehboob, executive director of the Islamabad-based Pakistan Institute of Legislative Development and Transparency.

In the 1980s, the country's anti-blasphemy laws were amended to specify offences including the intentional desecration of the Koran, which carried a life sentence, and defaming the Prophet Mohammed, which carries either a death sentence or life in prison.

The new laws were part of a wave of Islamization carried out by military dictator Zia-ul Haq. What ailed Pakistan, according to the dictator, was that it had drifted from its Islamic roots.

Mr. Haq introduced reforms to the penal code and the courts – looking to sharia law for inspiration – and he helped foster the rise of the madrassa school system and a culture of jihad during an era when Pakistan funnelled U.S. money to Afghan fighters against the Soviet Union.

According to data compiled by Pakistani Christian and human-rights organizations, 1,122 people have been implicated in blasphemy cases from the 1980s until 2012.

Just over half of all cases belong to minority communities: Christian, Hindu and Ahmadi – a Muslim sect that is described by the Pakistan constitution as being non-Muslim and among the most persecuted communities in Pakistan. The remaining cases involve Muslims.

The 2011 murders of prominent opponents of the law – Punjab governor Salman Taseer, killed by his own bodyguard, and federal minorities minister Shahbaz Bhatti, a Christian, killed on his way to work – led to international condemnation by human-rights groups. The Canadian government announced a posthumous award to Mr. Bhatti for his human-rights work.

The number of high-profile Pakistani politicians who have dared to speak up against the law can be counted on one hand.

By avoiding the issue, politicians continue to allow a law on the books that is used to make false allegations, settle scores and persecute minorities, human-rights activists say.

With any real hope of amending the law fading, there is talk of procedural changes that would take authority from lower court judges and local police officers and empower senior judges and police chiefs to investigate and hear alleged blasphemy cases as a way to avoid misuse of the law.

In Lahore's Joseph Colony, the Christian Masih family gathered recently in the front room of one of their homes. Uncles, cousins and siblings share stories of those days in early March when Sawan Masih was accused of blasphemy and fiery protests followed.

The rampage turned Joseph Colony's churches and more than 100 homes into a charred reminder for Pakistan's minorities that in this Muslim-majority country, being accused of desecrating the Koran or insulting the Prophet Mohammed carries a steep price – and that is even before a court hears the details of any blasphemy case.

"The only thing that was saved were the clothes we were wearing – otherwise we lost everything," said Khurram Bashir Masih, cousin of the accused.

Fear of another attack continues.

"People are running away from here. They're afraid," said Bushra Daniyal, Sawan's younger sister, sitting on the woven charpoy bed, as her nine-month old son climbs over her. Ms. Daniyal's father sits quietly in a lawn chair nearby.

Sawan Masih, a sanitation worker now in jail, is accused of insulting the Prophet Mohammed during a quarrel with a Muslim drinking buddy.

That same week, following Friday Muslim prayers, a mob converged outside the metal gates that lead in to the Joseph Colony neighbourhood's tightly packed two- and three-storey homes, demanding to see Mr. Masih.

Residents in this largely industrial area of Lahore known for its steel mills and traders knew that handing over Mr. Masih would mean his certain death.

The following day, after a hurried evacuation, mobs ran through the neighbourhood pouring flammable chemicals on buildings. Police did not intervene.

They describe finding their Bibles burnt in the fire. They worry that pursuing a court case will only aggravate matters. Also, not a single person believes the perpetrators who burned down their homes will be brought to justice.

He is more confident about Mr. Masih's blasphemy case. As one of his lawyers, Mr. Gill believes that a higher court will eventually dismiss the case because it is based on "flimsy" evidence that Mr. Masih referred to the Prophet Mohammed as a "joota nabi," or false prophet, he said.

In the hot afternoon sun, Joseph Colony looks like a building site. Labourers carry pails of mortar on their heads along footpaths. Bricks are piled outside homes being repaired.

The provincial government of Punjab gave most families 500,000 rupees, or $5,200, in compensation, and offered to repair their homes and churches.

In the local market, Joseph Colony's Christians are taunted.

But no amount of compensation can bring sukoon, or peace of mind, say residents.

The anti-blasphemy law has left a trail of fear. But law aside, vigilante justice has claimed 52 lives since 1990.

Inside the Lahore prison where Sawan Masih is being held, his sister Bushra Daniyal pays him a visit every Wednesday. His message during her most recent visit in early May is still raw.

"Get me out somehow or I'll do something to myself," he reportedly told her. She has not given up fighting for his release.

"I believe he will come home. I have faith in my God," she added.

Pakistanis lash out at government as millions endure 20-hour blackouts
May 27, 2013 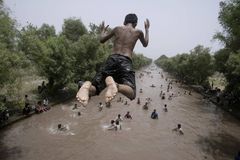 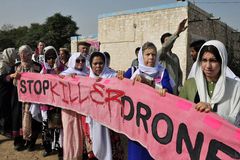 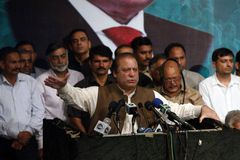