A new breed of parties that are skeptical about European Union integration or openly hostile to immigration stormed onto the political map, rattling the continent's mainstream parties in the world's second biggest election.

Exit polls and early results in Sunday's EU parliamentary election gave the anti-establishment parties broad gains in many of the EU's 28 countries and wins in a few. While the new EU parliament will still be led by the pro-Europe Christian Democrats and Social Democrats, the rise of the populist parties is bound to trip up the slow but determined effort to create a unified super state.

Among the main EU economies, France's Front National – with an anti-immigrant and anti-EU stance – and Britain's UK Independence Party (UKIP), which wants to pull Britain out of the EU, emerged as the big winners.

The Front National placed first with a forecast 25 per cent of the French national vote. That put it well ahead of both the centre-right UMP Party, led by former president Nicolas Sarkozy, and the ruling Socialist party of President François Hollande. At last count, the Socialists were running a humiliating third.

The Front National's surging popularity came as a surprise to France's mainstream parties and to those elsewhere in the EU, where resentment against the EU's expanding powers is growing. French Prime Minister Manuel Valls called the Front National's victory "a shock, an earthquake that all Europe's leadership must respond to."

Front National Leader Marine Le Pen, who is the daughter of the xenophobic party founder Jean-Marie Le Pen, said her victory had opened a new front against the EU, which, she argued, has robbed member countries of their sovereignty. "What has happened tonight is a massive rejection of the EU," she said as the exit polls rolled in.

In Britain, UKIP was on course to win, displacing Prime Minister David Cameron's Conservatives and burying their coalition party, the Liberal Democrats.

In Austria, the far-right Freedom Party could not beat the ruling conservatives, but took an impressive 20 per cent of the vote, according to projections.

But the Euro-skeptic parties suffered some disappointments too.

Italy's Five Star Movement, which was the continent's biggest Euro-skeptic party before the election, took less than 25 per cent of the vote, according to exit polls, well less than the ruling centre-left party of Prime Minister Matteo Renzi. The strong showing by Mr. Renzi's Democratic Party came as a blow to Five Star leader Beppe Grillo, a former comedian, who had boldly predicted his anti-establishment, anti-corruption party would sweep the elections, allowing it to force a referendum on Italy's use of the euro.

In Germany, Chancellor Angela Merkel's centre-right Christian Democrats easily placed first, as expected, but Euro-skeptic parties did manage to make gains in what is traditionally the most pro-Europe country.

Alternative for Germany, a new party that advocates the dismantling of the euro but wants Germany to stay in the EU, was on course to win 7 per cent of the vote. That would be enough to give it seven seats in the 751-seat parliament.

Supporters gave a deafening cheer Sunday night when they learned the party would enter parliament for the first time. "We're very happy," party leader Bernd Lucke, an economist, said at a celebration in a downtown Berlin hotel. "We want to put Europe on a different track, one that respects the sovereignty of the member countries."

Greece was also poised to endorse a party that has been critical of the EU's rising powers and the austerity programs imposed on the weakest countries. Greek state TV said the far-left Syriza party was leading with as much as 30 per cent of the vote, with the ruling, pro-austerity New Democracy party placing second with between 23 per cent and 27 per cent.

The ruling coalition has a mere two-seat majority in the Greek parliament. Some commentators think Syriza's first-place showing will be enough to spell the end of Prime Minister Antonis Samaras's government, triggering a snap election. But George Tzogopoulos, a research analyst at the Hellenic Foundation for European and Foreign Policy, said Syriza's victory was not quite big enough to topple the government. "Yes it was a victory, but it was not an impressive victory," he said. "It shows that Greeks are more or less divided in pro-austerity and anti-austerity groups."

The shock in Greece was the rise of the neo-Nazi Golden Dawn party, which received up to 10 per cent of the vote, placing it third overall in Greece and giving it seats in the EU parliament for the first time. The party denies it is influenced by Nazi ideology, but is vehemently anti-immigrant and has been associated with violent acts. Some of its leaders were arrested last year and charged with being part of a criminal organization.

Germany gives Euroskeptic party a voice in EU parliament
May 25, 2014 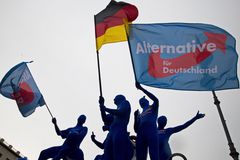 Markets shrug off EU elections, but for how long?
Subscriber content
May 22, 2014 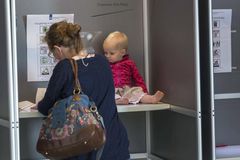 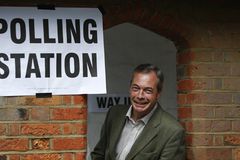 In euro-friendly Germany, the skeptics are a sideshow
May 23, 2014 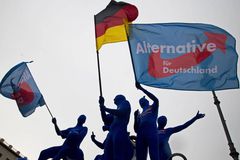