Rabbi Pinchas Vishedski was chatting outside this city's lone synagogue after Passover prayers on Wednesday night when three men in masks approached. They were unarmed, Rabbi Vishedski says, but carrying something hateful in their hands: a leaflet demanding that Jews living in Donetsk come to the regional administration building "to be registered," or face expulsion.

Someone – Rabbi Vishedski says he doesn't know who – is trying to either intimidate the Jews of Donetsk, or perhaps paint their political opponents as anti-Semites. Either way, it's a dangerous game in a region whose Jewish population was largely wiped out during the Holocaust, and targeted by frequent pogroms before that.

The photocopied decree bore the symbol of the self-declared Donetsk People's Republic, a pro-Russian movement that took over the regional administration building earlier this month, demanding a referendum on the future of Donetsk. The typed letter bore the name of separatist leader Denis Pushilin, though not his signature. A spokesman for the Donetsk People's Republic has told journalists that the document is a forgery.

The fact that Rabbi Vishedski doesn't know which side is threatening the city's Jews speaks to the reflexive anti-Semitism that exists on both sides of Ukraine's angry political divide.

He says he doesn't believe the paper is a genuine order from the separatist leaders, but it nonetheless sent a chill through a community that was decimated by mass executions after the city – then known as Stalino – fell to the Nazis during the Second World War.

"It looks like a provocation, it doesn't look like a serious flyer against Jewish people in Donetsk," the rabbi said. "For us, the terrible fact is someone made this terrible thing. For the past 73 years, no one has made a flyer like that. Seventy-three years ago, it was the Nazis. Nobody wants to go back to those very, very bad times in history."

The leaflet accused "leaders of the Jewish community of Ukraine" of having supported the pro-Western revolution in Kiev, an uprising that deposed the government of Viktor Yanukovych – a Donetsk native that some here still see as the country's rightful president – as well as of harbouring a "hostile" attitude to the "Orthodox Donetsk Republic."

"You should bring the funds in the amount of $50 to pay for the registration, a passport for us to make a note about your religion, documents about your family composition and legal documents to show ownership of the property and vehicles belonging to you," reads a copy of the leaflet that Rabbi Vishedski showed to The Globe and Mail. "If you refuse to be registered, guilty people will lose their citizenship and they will be sent compulsorily outside the borders of the Republic and their property will be confiscated."

Rabbi Vishedski said he has filed a complaint about the letter with local police, as well as Ukraine's intelligence service. He said the men who delivered about 40 or 50 leaflets to the synagogue on Wednesday did not wear any ribbons or flags that might associate them with pro-Moscow or pro-Kiev forces.

Russia has repeatedly accused the new government in Kiev of having links to fascists and anti-Semites, pointing to the participation of far-right groups in the protests that toppled Mr. Yanukovych in February. The government of Prime Minister Arseniy Yatseniuk includes seven members – including a deputy prime minister – from the Svoboda ("Freedom") Party, which was last year was labelled a neo-Nazi movement by the World Jewish Congress.

However, several prominent Ukrainian rabbis have come forward to say they see no signs of rising anti-Semitism since the revolution in Kiev.

Now, the pro-Russian separatists in Donetsk are fumbling with how to handle the same accusation.

On Friday, a speaker outside the fortified regional administration building read a series of poems, one of which included an anti-Semitic slur, telling Jews to get out of Donetsk.

One of the separatist leaders quickly grabbed the microphone from the poet. "We just want to be clear," the next speaker said. "We're not against the Jews." 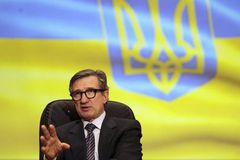